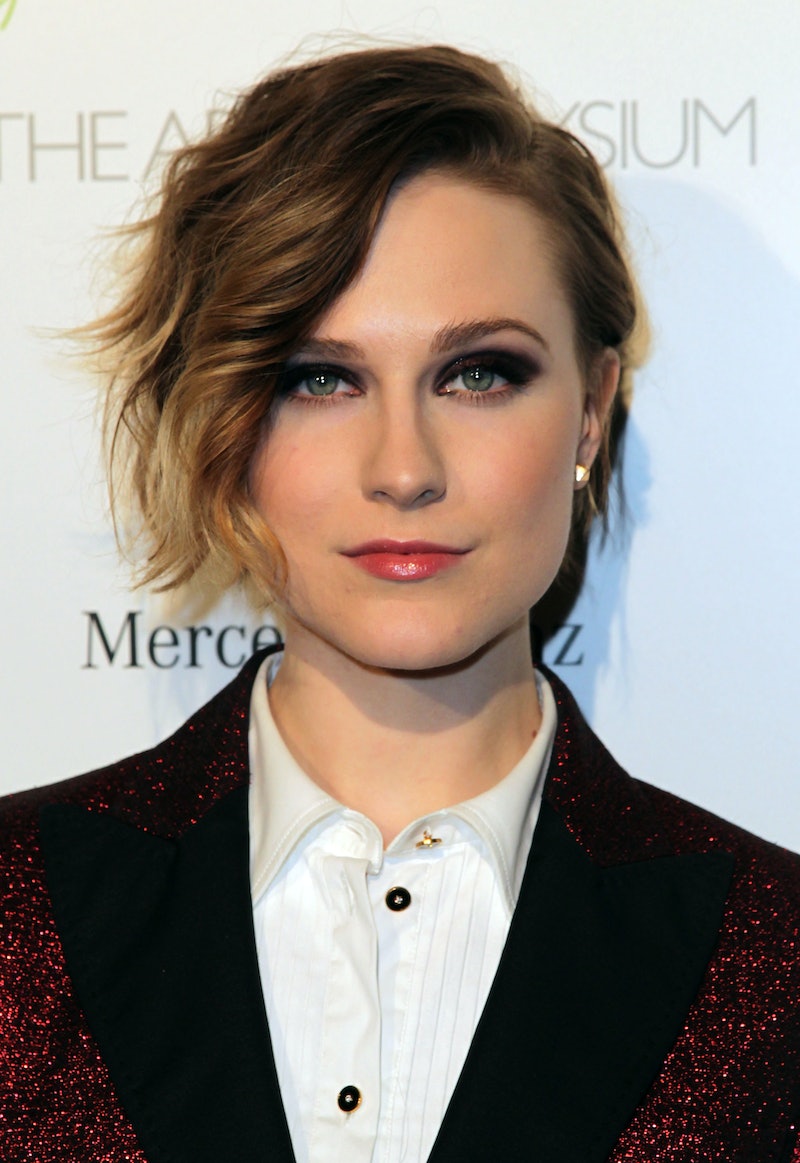 Evan Rachel Wood isn't afraid the speak the truth. On Sunday Wood revealed that she has a crush on actress Milla Jovovich. "My husband is well aware of the crush I have on Milla," she tweeted adding a winky face. "I mean who doesn't?!" This isn't the first time Wood has opened up about liking both men and women. In fact, she's kind of like the celebrity face for bisexuality when there are so few out there. Here are 7 ways she's helped normalize bisexuality by talking about it.

1. SHE'S OPEN TO EDUCATING OTHERS

Wood never gets offended when people have a question about her sexuality. In an interview with AfterEllen last year, she explained this stance saying, "A lot of times they just really don't know a lot about it or haven't talked to someone who is bisexual and actually get some insight into those issues. So I don't get angry or try to fight hate with hate; I just try to educate."

No question is too simple or too offensive and she always answers with a smile. She's like the sex ed teacher you wish you had in high school. (Seriously because I didn't learn anything about LGBTQ stuff in my classes.)

Frequent use of the winky face emoticon lets Wood keep her personality while answering questions, and also makes her relatable which is helpful for people who are curious. She's not talking down to them it's almost as if she's letting them in on a secret just between them.

4. SHE ACKNOWLEDGES THAT IT'S HARD

Part of Wood's educating the masses is acknowledging that fitting into that gap between straight and gay isn't always easy. Growing up she said she felt confused because she didn't know bisexuality was an option so she didn't understand her feelings. "You’re kind of torn between this world of gay and straight and you’re stuck in the middle and sometimes get shunned by both sides and feel there’s not really a place for you and it can be really hard," she said in an interview.

5. SHE CLEARS UP MISCONCEPTIONS

Wood got married after she'd already come out as bi. After he marriage to Jamie Bell people were curious if marrying a man still made her bi or if she had now made her gender "choice." The misconception one is common for bisexual people who when they choose to enter a long-term relationship with the opposite gender often get labeled as "not really gay" or having "gotten over that phase." Well next time they can pull up Woods as an example, yes, she married a guy but that doesn't change her sexuality. "I entered into a monogamous relationship and it could have been with a woman,” she said.

6. SHE DOESN'T LISTEN TO THE HATERS

When she was just a child actress in the early 2000s she played a character who had a crush on her female friend. Back then lesbian plots on television shows weren't as normal and the episode that dealt with the issue was banned in several places and Woods saw some backlash, but she didn't let that bother her or make her feel any less normal.

It’s funny because it’s such a natural thing for me, I always forget that it’s controversial until I come up against people that are coming down on me or calling me names or telling me I’m a sinner and stuff. It kind of just makes me giggle because I forget that there’s that kind of mentality. To me it’s not controversial, it’s totally normal.

7. SHE WENT PUBLIC TO MAKE IT MATTER

Coming out is a hard decision for anyone, and for Wood it was even more difficult because she was in the public spotlight. But she decided to use that spotlight for the betterment of all bisexual people and to come out publicly at a time when no one was. In 2011 she told Esquire the truth about her sexuality and she's never looked back. "I think because of the state that society is in right now, especially on this issue, I felt a real need to come out and speak out for equal rights and for the gay, lesbian, bisexual community," Wood said later about her decision. "If I can use my status to draw awareness and get people talking about it, then that means the world to me. So that’s really why I did it."