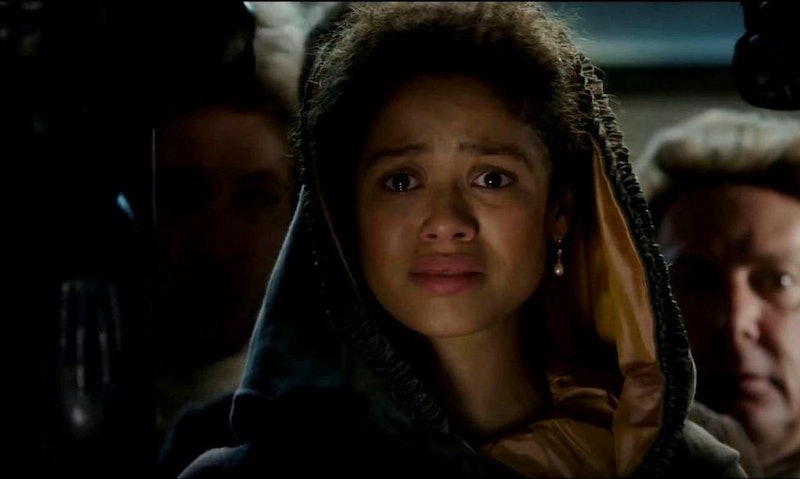 As someone who spent a chunk of her childhood living with her half-black cousin at her grandparents' house in a suburban Connecticut, Amma Asante's moving second film, Belle (in theaters May 2), immediately registered as a must-see. The story of a mixed race, illegitimate child of a nobleman and black slave, raised within the confines of her father's aristocratic birthright, Belle transcends its roots as a period film and punctuates its Jane Austen flair with a far bigger, more important discussion at its heart. That is to say, what it means to be an "other," particularly someone who cannot be blanketly categorized.

Because when people cannot be easily defined, it creates conflict. Dido suffered through it relentlessly and uniquely given the time. Dido Elizabeth Belle Lindsay (Gugu Mbatha-Raw) was the illegitimate, mixed race daughter of Admiral Sir John Lindsay (Matthew Goode). In a world so often — and easily — regulated by its cut-and-dry societal rules, Dido was a bit of an anomaly. Thanks to her race and status, she was raised in aristocracy but shunned from many of the typical traditions afforded those with nobel social standing. Frozen between two worlds where she is essentially neither black or white enough to exist as has already been socially constructed, Dido must wade through these waters alone in order to find — and help create — a world that is better to those who are not born into luxury or able to achieve it (thanks to their white skin).

People like Dido and my cousin face an enormous challenge that most people — especially us white folk — never come in contact with. Though nowhere even close to as abhorrent as many folks treated Dido throughout her lifetime, even at a young age I was aware of people's inability to process ("You can't possibly be really related for real"; "How can she be your cousin? She's black") my cousin's color with her familial and social environment. So, too, where the folks that made up Dido's world. Raised by her aristocratic great-uncle Lord Mansfield (Tom Wilkinson) and his wife (Emily Watson), Dido's lineage afforded her certain privileges, but her skin color prevented her from many of the typical traditions provided by noble standing. She was told she could likely forget about marriage; forced to dine away from her family when aristocratic guests were in town; she could not be presented at court like her cousin Elizabeth (Sarah Gadon), with whom she grew up with and shared an incredibly deep bond. And even if she could find a suitor, he would have to be of high enough social standing to be "worthy" of her and her familial upbringing — forcing her into a corner all the more.

What makes the film timely for a modern audience is the fact that perception problems are still very much an issue for black people today. Dido must constantly fight against two diametrically opposed perceptions of who she is while still being perceived as inadequate in both arenas, because of the other. She's too white to be black, too black to be a fully accepted noblewoman. And, frankly, that's not all that far-off from the struggle of many black people today, photoshopped to look whiter, represented as criminals, video vixens, and — from time to time — pre-packaged as the all-knowing Magical Negro, come to aid the white person's coming-of-age. They're so often unable to rebuff those stereotypes and self-actualize because they've long been distilled down tropes or ideas in order for white people to understand them. So much of their experience rests upon the perceptions of other people they encounter, and so, too, was Dido's struggle.

As shown throughout the film by the integration of artwork (actual portrait, above, of Dido and her cousin Elizabeth notwithstanding), black members of society at the time were always seen as physically below their white counterparts — a visual reaffirmation of their social standing. Today, black people are still struggling against the push and pull of society's pre-determined delineations for them. Even in roles of power, like, say President of the United States of America: Barack Obama's blackness, rather than his personhood, is often the first place people go to discuss him in relation to his actions as a leader. Often, he is either too black or not black enough for mouthpieces commenting on the matter.

What helped Dido's case was her proximity to those who could affect change. Her great-uncle Lord Mansfield was Lord Chief Justice in England at the time, and presided over a case regarding whether or not slaves could be defined as property. With the help of an idealistic vicar's son determined to change this perception, Dido was able to, simply by existing and asserting her personhood, inform Lord Mansfield's opinion on the matter and in turn help shape the course of history.

Without people like Dido, who contain a dynamic understanding of the duality of human existence, we as a human society, cannot move forward. A film like Belle does this triumphantly, because it proves the error in thinking of humans as anything other than people first. Even if not with a malicious intent — or even if done in the name of protection — the use of race, gender, or socio-economic status as some sort of societal markers doesn't shield the "other" person from the evil of others, rather it allows it to continue and flourish. Shying away from that conflict only breeds further ignorance. Belle is a refusal to do just that, with Dido Elizabeth Belle Lindsay a champion worth knowing about.

More like this
Pro Footballer Zander Murray Is "Blown Away" By Support After Coming Out
By Sam Ramsden
Paul Mescal, Man Of Mystery
By Samantha Leach and Heather Hazzan
12 ’90s Movie References You Missed In 'Do Revenge'
By Radhika Menon
What’s New On Netflix: Ana De Armas’ 'Blonde' & A Nick Kroll Special
By Arya Roshanian
Get Even More From Bustle — Sign Up For The Newsletter