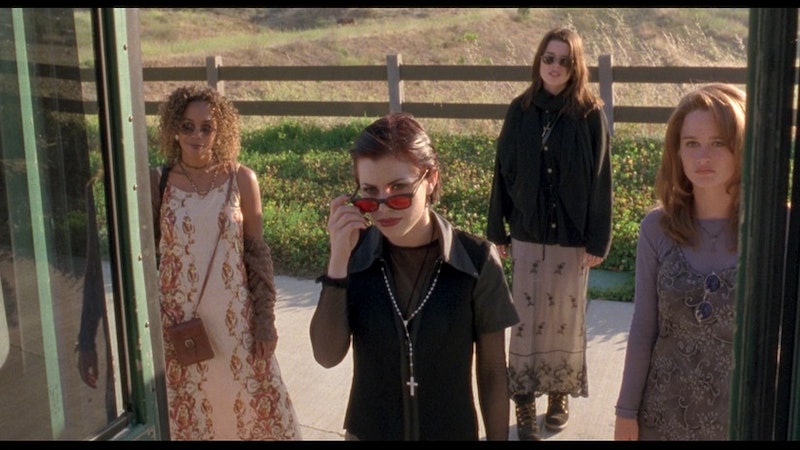 The Witchy Woman is often mistaken for other stylish archetypes, but that makes her very unhappy. She's not a goth, though they share a favorite color. She's not a hippie, despite her penchant f or Stevie Nicks . And she's definitely not a vampire. In fact, most vampires are copying her.

Who is she? The Witchy Woman is that girl who always has an otherworldly gleam in her eye and tends to stare out the window a lot... but she’s not daydreaming — it’s more like she’s summoning something. She doesn’t think jokes about Salem are funny, and she can cure anything with a tonic made from the herbs in her garden. Sure, she functions in normal society — holds back on the black eyeliner for work, gets a spray tan once in a while, doesn’t try to fly through your window when you’re sleeping — but sometimes she longs for the days when her kind roamed free.

It isn't crazy to want to channel a bit of the Witchy Woman archetype through your own wardrobe. Who doesn't have days when they feel wan, mysterious, and in tune with the moon? Who doesn't have achey mornings when they just want to cure themselves with oil of comfrey and wing of bat? Here's how to let the world know you're feeling moodily glamorous and not to be messed with, because you've got a trick or two up your (batwing) sleeve.

I don't think you need me to spell this one out for you.

2. Unless it's a diaphanous white dress.

There's something inherently creepy about long white dresses worn in somber situations. The dress may say "bride," but you wear it like "ghost."

3. Bat sleeves are the best silhouette.

They make you look like you can fly without a broomstick. Isn't that droll?

4. Jewelry should be piled on and vaguely religious.

6. But red eyeshadow is glamorously spooky in a totally different way.

Whatever makes you feel most likely to cast enigmatic stares across the room.

7. Always have a tube of dark lipstick in your purse.

There's a fine line between "black" and "dark red." You have erased that line.

Long enough to terrify people when you point to them and scream in Latin, but not so long that you can't mingle with "normal" society.

Want to look even more moon-touched? Run luminizer across your cheekbones and down your nose.

10. Your new favorite accessory is a candle.

It flickers warmly and holds all your spells until you don't want it anymore, and then…gone.