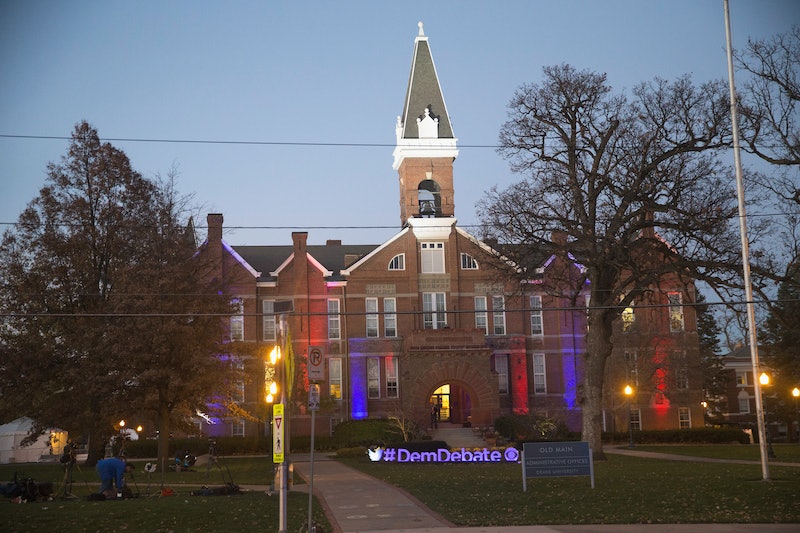 First things first: Drake University isn't Duke. We know our colors are also blue and white, that our mascots are easy to switch around, and that phonetically speaking — no need to remind us. Calling us the "Ivy of the Midwest" isn't going to help, either. (Although, we'll all proudly drop the phrase when fawning over our small class sizes and professors who actually know our names.)

The rest of the world may know us from our world-famous Drake Relays, but we're more keen to brag about hosting multiple presidential debates and our giant community of absurdly aggressive squirrels. And you may not know, but Des Moines is one of the best places to live in the world (and not only because it's located a mere 155 miles from the World's Largest Truck Stop).

Don't take our word for it, though — just ask one of our esteemed alums about their time in the city: filmmaker John August, PGA champion Zach Johnson, or the late comedian Steve Allen. It doesn't matter if you're a current student, a recent graduate, or longtime alum, you'll be able to look on all of these and crack a smile — because there are some things only we Drake students can truly understand.

Peggy Isn't just the name of A Person

It's the only place near campus where you won't be judged for doing class group work over a beer (or ten).

And Neither Is Chad Stephens

(Although he did run for spot on the student senate.)

But Keith Is. And He Rocks.

There's nothing better than getting a big, loud greeting from Keith each time you enter the cafeteria or grab a snack from the C-Store.

You don't think being a D+ Student is a bad thing

Because creating a recruitment campaign around the idea of D+ ("Your Potential + Our Opportunities") was a great idea. We even snagged prime space on Adweek for that one.

you Spend Saturday Nights At The Library

Because it's a bar — and it's conveniently located down the street from campus.

Lucky for us, it would meet you wherever we told it to (all bus stop shelters avoided).

You Wouldn't Be Caught Dead At The Dublin

Because that bar was so freshman year.

you know Drake Relays Aren't really About The Races

Well, for the rest of the world, they are. For Drake students, it's more about the three-day blackout that ends in a university sponsored $1 midnight pancake breakfast.

It's An Excuse For A Massive Paint Fight

And A Beautiful Bulldog Competition

And, Speaking Of, a Porterhouse Is Not a Meal

It's the name of the most famous Beautiful Bulldog. (R.I.P., you handsome devil.)

...and a high jump competition inside of a grocery store. Because what better way to enjoy athletics than among chain stores and leafy vegetables?

You Know An EGG Party Has Nothing To Do With The Food...

(They're just a house of the greatest guys you'll ever meet.)

...It Just Means You're Probably Not In A Sorority House

Especially since the "kissing rock" represents a place where the Chancellor's Elm once stood (which had to be cut down after catching Dutch Elm's disease in 1969). In this spot Chancellor Carpenter said, "Here, we will build our university," and Drake was born.

Not only is David Maxwell a rad guitarist, but his dad is jazz icon Jimmy Maxwell.

Because it wouldn't be a Drake event without a drumline made up of uber-talented children and sick beats.

You've Been A Victim Of "Hubbell Stank"

There's no getting that Hubbell cafeteria smell off of your clothes — just don't make the mistake of going right before class.

And have Walked Through the McDonald's Drive-Through

Which is totally allowed and most definitely expected.

Eventually, You Got used to The Helmick Commons Dragon

And though upon graduation, You May Be Feeling A Little Like This:

Our Drake Memories Are Worth Every Dollar

(If you factor in the post-grad networks, that is.)

More like this
These Are The 3 Most Mellow Zodiac Signs
By Kristine Fellizar
Here’s Your Daily Horoscope for December 5, 2022
By Mecca Woods
20 Christmas Movie Quotes That'll Get You In The Holiday Spirit
By Alexis Morillo
An Open Letter To The Person Who Bought Steve Jobs’ Birkenstocks For $218,000
By Ginny Hogan
Get Even More From Bustle — Sign Up For The Newsletter