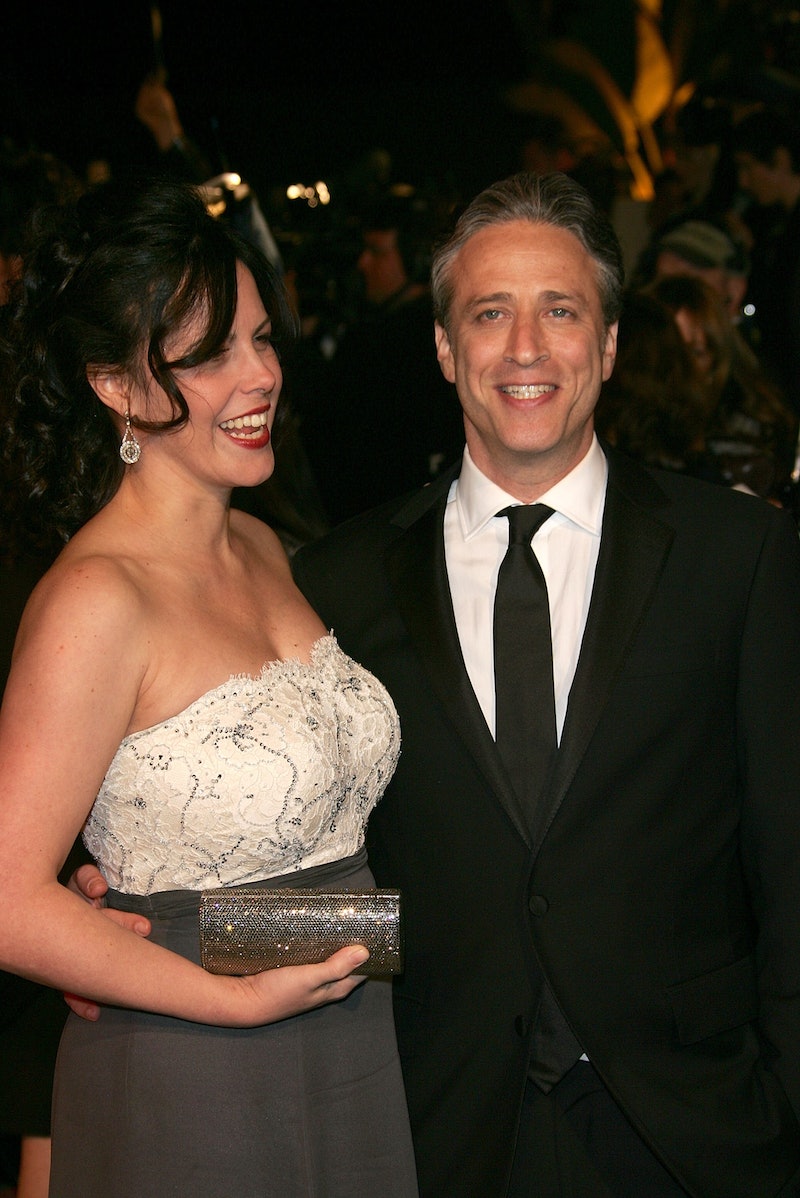 Since our crush list has long held a spot for the Daily Show host Jon Stewart, we took a moment to ask ourselves: Who does America's favorite satirical newsman have on his crush list? Let's meet the woman behind the Comedy Central king, Stewart's wife Tracey Lynn Stewart. Aside from her famous husband, Mrs. Stewart is perhaps best known for her own Moomah The Magazine , (formerly Tribeca's Moomah Cafe).

The website originally began as a cafe and artistic playhouse space for families. After shuttering its doors, it briefly returned in 2012 in kiosk-form before being transformed into its magazine incarnation. The online mag also spearheads a "Make Nice" mission, geared towards helping kids connect with the world around them. Just because her art cafe is no longer doesn't mean the mega-multitasker abandoned her artistic mission, either. She's also the vice president of the Portrait Project, a global children's art initiative.

So how did Mrs. Stewart catch the eye of one of the most coveted men in comedy? Through a blind date set up by a mutual friend, which is so adorable and normal, it kind of hurts. The swoon party isn't over yet- Stewart proposed to his then-girlfriend of four years with a crossword puzzle especially commissioned from The New York Times Will Shortz. (If you're a crossword nerd, you know that is kind of a big deal.)

Of course, aside from her mini-mommy empire and charitable pursuits, Mrs. Stewart is whip-smart and satirical in her own right. As if you would you expect anything less. As evidenced by her response to a National Enquirer story about her husband being a domestic tyrant, Jon Stewart isn't the only wry jokester in the family. (Her choice line? Offering her husband a hall pass to cavort with Martha Stewart just for the domestic benefits of having a perfectionist sister-wife).

She's also an all-around proponent of female awesome-ness, having written for The Huffington Post about trying to raise her daughter to be nice in a snarky world and about the politics of introducing Barbie into her children's lives. While the mommy blog circuit is full of smug one-uppers, Mrs. Stewart is a pretty shining example of keeping it real and keeping it cordial. Which makes her kind of one of our favorite people ever, (and not just because she's married to another one of our other favorite people ever).

More like this
Mel C Wants You To Know That Margaret Thatcher Wasn’t A Spice Girl
By Darshita Goyal
Here’s Everything You Need To Know About Operation London Bridge
By Bustle UK
Who Is Nick Cannon Dating & How Many Kids Does He Have?
By Jordyn Tilchen and Radhika Menon
Hailey Bieber Just Responded To *That* Viral Met Gala Moment
By Radhika Menon and Sam Ramsden
Get Even More From Bustle — Sign Up For The Newsletter