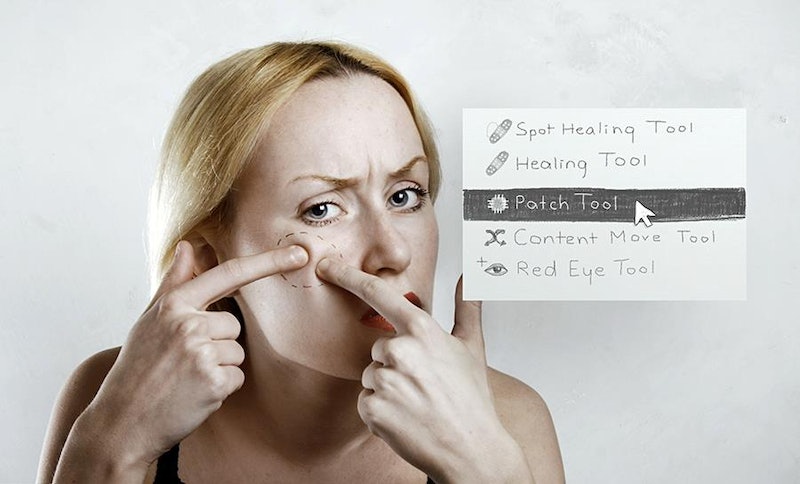 Like most photographers these days, Flora Borsi uses Photoshop to perfect her images. Unlike many photographers, however, she recognizes that she relies perhaps a little too much on it — and knows that this reliance probably shouldn’t be the industry norm. That’s why she decided to do something about it with a photo series she calls “Photoshop in Real Life.”

The project first saw its beginnings when Borsi had an almost unreal experience looking in a mirror. “I’m a photographer, and I’m a Photoshop addict — I retouch almost every picture, but not every detail,” the Hungarian photographer recently wrote in an email to the Huffington Post. “Once I went to the bathroom, and I saw something on my face. I had an instant reaction, for a second I thought I could remove a spot from my face with this software in reality!”

We’re well aware at this point that the wanton use of Photoshop has become a huge issue — so much so that there’s currently a bill making its way through Congress that would place legal restrictions on the use of image manipulation in advertising. Its most recent iteration, the Truth in Advertising Act of 2014, was introduced at the end of March; said sponsor Lois Capp, a Democrat from California, to the Daily Beast, “This bill specifically does not require the FTC to take a specific approach to these issues. Instead, it is calling for a conversation to begin on what is an altered body image, what effects does it have on the health and well-being of consumers, and if that false advertising is harmful, how to move forward to address it.”

For her part, Borsi noted, “I’m really curious about what people would do with Photoshop in real life. Maybe everybody would be perfect, but only [on the] outside? What would be the difference between us?” Sounds like a dystopian sci-fi story in the making, doesn’t it? Whether or not the Truth in Advertising Act would put a stop to it remains to be seen; in the meantime, though, props to Borsi for drawing attention to the issue. As she put it, “Little freckles, wrinkles, etc. [define] us and make everybody unique.” Ayyyy-men!