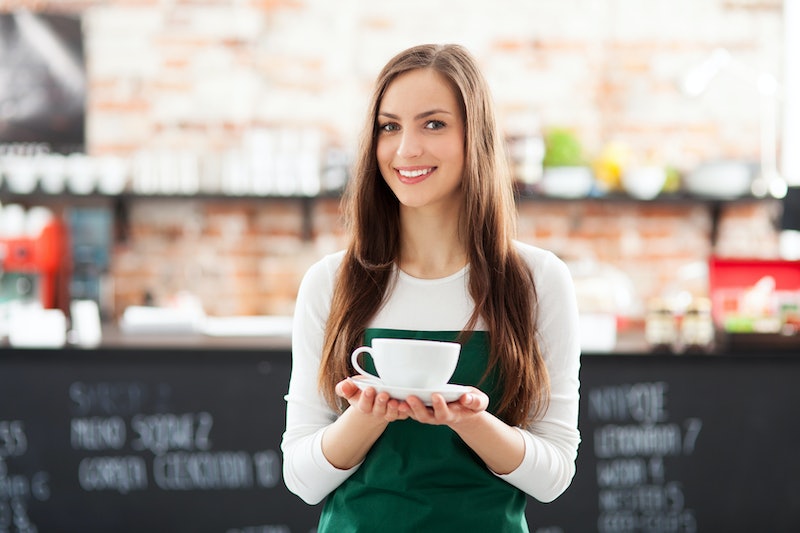 According to Laura Shin in her two-part "Ultimate Guide to Living on Tips" at Forbes, wearing makeup comes with a serious payoff for female waitstaff.

Ladies, wear makeup. While the feminist in me hates to break this news, a study in France showed that 50% more men left tips if the waitress wore makeup, and the average amount was 26% higher. Another study, also in France, found that red lipstick, when compared to pink and brown shades or au naturale, brought in the bucks.

Shin also cited a 2012 study by Nicolas Guéguen and Céline Jacob of the Université de Bretagne-Sud, who found that red lipstick specifically has an effect on tips from men. The particular shade of red is of no consequence. Plus, it's just guys with this percentage prejudice — female diners are not influenced to tip better or more frequently based on the makeup their waitresses wear.

I commend Shin for providing a comprehensive guide to making a living wage from a restaurant job, and while I understand that she is simply presenting the unfortunate truth here, encouraging women to accept this as fact is an issue. Women should not have to live with the fact that they are held to a different physical standard than their male counterparts.

While we may assume that male servers are also tipped higher based on physical attractiveness, this may not be the case. According to "Predictors of Male and Female Severs' Average Tip Earnings," a study published in Journal of Applied Social Psychology found that "physical attractiveness was a much better predictor of waitresses’ average tips than of waiters’ average tips." In short, being pretty had a much greater impact on female tips.

Female waitstaff are notoriously objectified by men that they serve. In fact, women restaurant workers report sexual harassment at five times the rate of employees in other professions. Encouraging waitresses to wear makeup and lightly touch their customers for higher tips tells them that just being good at your job is not enough. You need to be sexually desirable and flirtatious as well. Equivalent suggestions are not given to men.

Even if good looking guys did receive significantly higher tips than less attractive men, there is still a double standard at play here. A woman, no matter how naturally beautiful, is expected to go above and beyond to enhance that beauty with makeup in order to increase her income. She is being asked to alter her appearance.

As Stylite's Ashley Hoffman says, "People who live off their looks are accustomed to piling a boatload of makeup on, but the thing is, waitresses aren’t models or actresses. They’re not there for viewing pleasure. They serve food."

Gender discrimination is a reality that female workers face in any profession, and we're not saying that being a feminist requires tossing all your bold lippy in the trash. But what's especially interesting about the correlation between tips and makeup is that, besides being gross, it's counterintuitive. In fact, a report released earlier this week found, once again, that men much prefer a natural, barefaced look.

So why, if less is more, do men prefer their waitresses all gussied up? My guess would be that it feeds the fantasy. Female waitstaff are often treated like a side of entertainment that comes with your entree. If men expect to view waitresses the same way they view models in a Victoria's Secret catalog, then of course they'll place importance on attractiveness and makeup.

Until the day that I can insist to be served by a shirtless Channing Tatum lookalike, I maintain that we should tip all servers based on, you know, actual service and not gender, lipstick, or amount of carefully timed shoulder grazes administered throughout the meal.