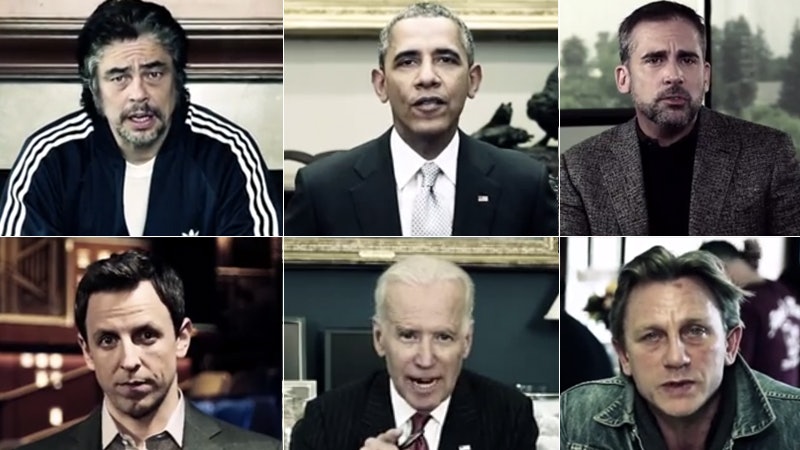 This week, the White House released a PSA on sexual assault called "1 is 2 Many." The spot features actors Benicio del Toro, Seth Meyers, Daniel Craig, Steve Carell, and Dule Hill, as well as Vice President Joe Biden and President Barack Obama. In it, the men speak directly to other men (implicitly, that is) about what constitutes sexual assault. They then ask for their fellow men to help end sexual assault.

Overall, the PSA presents a good message: It not only illustrates why men should not hurt women, but it also concisely explains what constitutes as rape: "If she doesn’t consent or she can’t consent, then it’s rape or assault." It even goes one step further to advocate for help and assistance: "If I saw it happening, I wouldn’t blame her, I’d help her."

In the case of this PSA, the nameless wife, sister, and daughter belong to the men featured on camera. Daniel Craig’s wife, or Seth Meyer’s sister — these women are not featured; they are the entities that, at least linguistically, belong to the men who speak on their behalf. They are women to be protected.

In all honesty, it is oddly powerful to see James Bond and the President of the United States speaking out against sexual violence. But here's the problem: this PSA is also furthering a narrative that the solution to ending sexual violence is to continue thinking of women as people who need male protection.

As much as I appreciate the impetus behind this video, after I watched the spot twice, I had a feeling that I simply couldn’t shake: the sense of being omitted. In this video, each man reminds other men that they should care about sexual assault because it is "happening to our sisters and our daughters, our wives and our friends." Take a look, and see what you think.

Seems harmless enough, perhaps. But this kind of language does not look at women as people: it looks at women through their relation to other men.

President Obama is often guilty of this oversight. This rhetoric was on display during last year’s State of the Union address when he said that "We know our economy is stronger when our wives, mothers, and daughters can live their lives free from discrimination in the workplace and free from the fear of domestic violence." Obama has employed this phrasing so many times that there was even at one point a White House petition asking him to simply stop addressing women this way. Apparently, the White House didn't get the message.

Writer Anne Thériault discusses the issue with this kind of rhetoric in her piece "I Am Not Your Wife, Sister or Daughter. I Am A Person."

This device, which Obama has used on more than one occasion, is reductive as hell. It defines women by their relationships to other people, rather than as people themselves. It says that women are only important when they are married to, have given birth to, or have been fathered by other people. It says that women are only important because of who they belong to. Women are not possessions.

To define women as solely sister, wife, or daughter prevents us from being considered as fully-formed, autonomous human beings. And when it comes to sexual assault, that is the root of the problem to begin with.

In the case of this PSA, the nameless wife, sister, and daughter belong to the men featured on camera. Daniel Craig’s wife, or Seth Meyer’s sister — these women are not featured; they are the entities that, at least linguistically, belong to the men who speak on their behalf. And they are women to be protected.

What about a PSA that states that women are people and should not be abused based on the simple principle that an individual’s body is their own and must be respected as such? Or a PSA that acknowledges that sexual assault can also happen to men, or that women are also capable of protecting other women?

We’re all someone’s daughter or son. But no one wants to be defined by simply those titles. Just like men, we want to be considered as independent people and not as belongings. That goes for whether we're at a party — or in a PSA.

More like this
'The Capture' Is Finally Back – & S2 Looks Tense AF
By Sophie McEvoy and El Hunt
The Lionesses Are Calling For Equal Access To Football In Schools
By Sophie McEvoy
Kim Kardashian Is Releasing A Line Of Earbuds With Beats
By Alexis Morillo
How Do I Deal With Both ED & Premature Ejaculation?
By Sophia Benoit
Get Even More From Bustle — Sign Up For The Newsletter