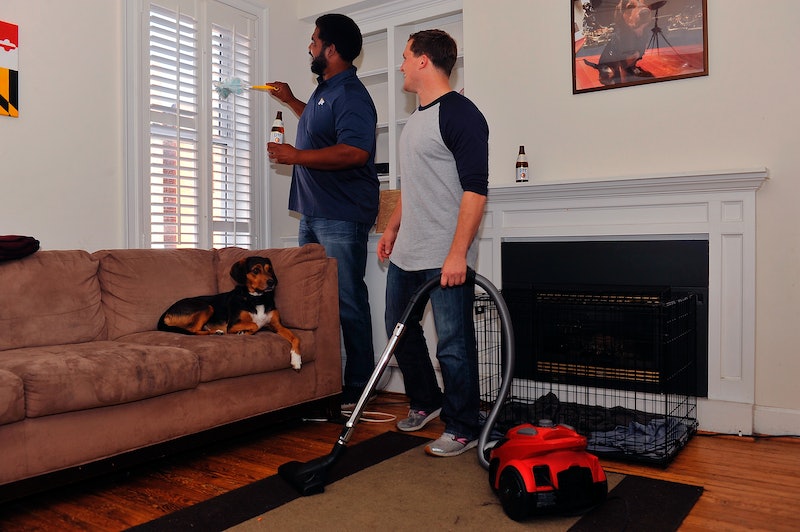 Tired of trying to get your roommates to do their chores or pony up for the bills? As is the case with almost everything these days, there’s an app for that. HomeSlice, a brand new app available for both iPhone and Android, promises to solve all your household maintenance problems for you by creating a miniature social network for your home. Awesome idea? Or really, really terrible idea? You be the judge.

Here’s how it works: When you first boot HomeSlice up, it asks you to create a “Home.” Once you’ve done that, you can invite all your roommates to join it — and that’s when the fun begins. The app is divided into four sections: “Supplies,” “Chores,” “Bills,” and “Whiteboard.” The “Supplies” section lets you customize a list of shared items like toilet paper, trash bags, paper towels, and so on; if you slide the little triangle on each item to the left, it turns green for “in stock,” and if you slide it to the right, it turns red for “out of stock.” The “Chores” section works the same way — left for “complete,” right for “incomplete” — as does the “Bills” section, with left being “paid” and right being “received.” The Whiteboard feature, meanwhile, is kind of like a shared Facebook wall for you and your roommates; the app automatically posts when changes are made to any of the other three sections, and you can leave notes on it to communicate with each other.

I downloaded HomeSlice and poked around it a bit, and generally, it seems like a pretty good idea. But here’s the thing: If you can’t get your roommates to do their chores with a simple chore wheel, then what makes you think they’ll do them with what’s essentially a high-tech version of that chore wheel? As the Daily Dot says, “It still doesn’t account for laziness.” Truth. Besides, sometimes it’s much more effective to actually sit down with your roommates and talk about issues face to face. I can see HomeSlice being as much a source of passive aggression as a solution, depending on the people using it.

For what it’s worth, HomeSlice’s creator, Patrick Montenjano, thinks it’ll put a stop to unpleasant roommate altercations. “It reduces the tension within the home,” he recently said to the Standard. “It allows roommates to communicate in a non-confrontational manner and keeps everyone in the loop on the daily activities and needs of their household.” He continued, “We want HomeSlice to be a fun way for roommates to communicate while also incorporating productivity tools to help them run their home. We like to think of ourselves as a blend between a productivity and social app.”

I can see the app working better for apartments or houses with three or more people living in them; if it’s just you and one other roommate, you probably won’t need something this elaborate to divvy up responsibilities. But as a parting shot, I leave you all with this: When it comes to cleanliness habits and money, have those talks before you move in together. Seriously. Nothing will keep you on track better than knowing what you’re getting into before you get into it.