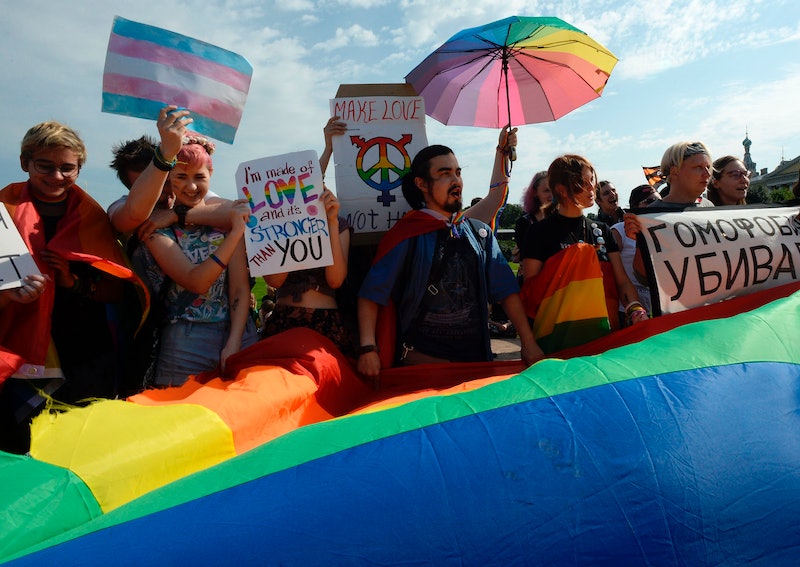 After Kseniya and her partner Natasha, a young couple living in Novosibirsk, Russia, decided they were ready to raise a baby together, it wasn’t hard for them to settle on a sperm donor. They wanted someone who would be involved in their child's life, and their friend Bulat Barantaev was kind, willing, and financially stable. He is also the de facto leader of the LGBT rights movement in Siberia — and the most famous openly gay man in their city of Novosibirsk.

The women initially wanted to keep their surnames private for the family’s safety, but Baby Mira’s birth to three proud parents made a splash in the local news anyway. It was Bulat who had pushed them to leak the story.

How can a marginalized group fight to change an oppressive culture —while still protecting themselves against it?

Few gay people ever come out publicly in Novosibirsk, which is arguably more socially conservative than Moscow or St. Petersburg. The unofficial Siberian capital is Russia's third largest city but has a less than stellar record on gay rights. (In December, a famous Russian sitcom actor made headlines during a speaking tour for telling a crowd in Novosibirsk that gays should be burned in a furnace.)

Bulat is in a unique position to leverage his media visibility to create a public dialog in a city that desperately needs it. Mira's birth gave him an opportunity and even more reason to initiate that dialogue.

Some of the hostility directed at Bulat's new family sounded almost like satire. One tabloid fretted over what Baby Mira would do every February 23, the Russian holiday honoring male relatives: “She’ll give a card to whom…one of her moms? Bulat? Bulat’s boyfriend? There are a sea of questions!”

No matter how ridiculous, the articles stung. “It wasn’t so pleasant, especially for the mothers,” Bulat now admits. “I guess that public attention is drawn to me. But my daughter’s moms are more cautious — they’re afraid of discrimination, if not open aggression.”

Bulat first rose to local prominence in 2011, when he and a few friends staged an “aktsia,” a small-scale political demonstration. They brought banners and brochures to Novosibirsk’s central square aimed at parents. They used slogans like, “Accept your child however they are!” and “What choice do you leave your child if he is gay?” The incident sparked minor outrage in town and launched Bulat as the local go-to on gay rights issues.

Russia’s infamous federal law forbidding “propaganda of non-traditional sexual relationships” has attracted much Western attention. Under the law, fines for promoting a homosexual lifestyle can range anywhere from around $120 to $2,800, and can in rare cases result in up to 15 days in jail. It's an undeniably reprehensible law — but the actual enforcement has been relatively minimal.

Outrage against the law spiked during the 2014 Sochi Olympics, and was later eclipsed by Russian military aggression in Ukraine. Western criticism focused solely on the law itself partially obscures the fact that the legislation is one more blow in a wider context of persecution and marginalization. Most gay Russians fear violence and social ostracism more than the law and potential fines.

They also face a dilemma: how can a marginalized group fight to change an oppressive culture —while still protecting themselves against it?

Many of Novosibirsk's LGBT advocates walk the line of raising consciousness while maintaining privacy with creative forms of "guerrilla activism" on a shoestring budget. A group gathers every Sunday afternoon at the office of a regional HIV-AIDS organization, where some of the members volunteer. They sip tea at a conference table as they plan out their next aktsia. Like Bulat’s one-time demonstration in the central square in support of gay teens, these aktsias are designed to make gay rights a popular topic.

“It’s a good thing you’re not only talking to Bulat,” Dmitri, a group member, joked at one meeting in March. “You should meet people who have a more typical Russian experience.”

Nikita, one of the group's coordinators, says that most Russians in Novosibirsk probably don't even know that the gay propaganda law was ever passed — that's how rarely LGBT issues are discussed publicly. Aktsias remind the public that gay people exist.

“The idea is, we get posters and flyers up, and put them where people stand around, like at bus stops. Then people will see them, and have a conversation about it.” Previous slogans have included “Love is Love,” “Homosexuality is Just Another Kind of Normal,” and “Your Hatred Kills.”

Some group members pitch in by making posters, and others drive around and put them up around town late at night, when they're less likely to get caught. Gradually, the efforts seem to be working.

“Three years ago, there were no gays seen in public,” Bulat says. “Maybe in St. Petersburg or Moscow, but not here. So it was a big deal in the public sphere. At first, bloggers and journalists tried to pair every article with pictures of activists in pink dresses, looking like carnivale performers — stuff like that. But I think the attitude is changing — they are starting to see we are just normal people.”

The social and physical risks

The threat of violence against gay people in Russia is all too real, and all but ignored by law enforcement. A queer university activist named Tosha told me that one previous aktsia — a flash mob in a park releasing rainbow balloons — was interrupted by homophobes who caught wind of the plan on social media.

It looked as though more saboteurs had showed up than actual activists. A few of them jimmied open a fire hydrant and doused the demonstrators, leaving one girl with a broken arm. Another homophobic assault allegedly targeted a queer film festival in 2012. No charges were ever filed.

Not that filing charges would have made much of a difference. Novosibirsk’s LGBT community has little reason to feel protected by the law. When Nikita’s apartment was broken into last year by burglars, he said the police figured out he was gay ... and never followed up.

“Everyone knows there’s no real protection, even if it is in the constitution,” Nikita says. One man I met was hospitalized for three weeks after a group of attackers lured him over by posing as a gay guy online. He had broken ribs and a tooth through the chin, but was never questioned about the assault by authorities.

Russia's LGBT rights problem may be broader than the gay propaganda law, but the law's proponents are obviously on the thugs' side. Anatoly Artyukh, the aide of Vitaly Milonov – the St. Petersburg legislator and anti-gay poster boy who ushered the bill into law, has harassed Bulat over Facebook. “It was dirty, rude stuff,” Bulat says. “It is ridiculous how our government’s staff spends their time.”

For Bulat, Russia's cultural divide is about more than gay rights: it's about what kind of world now five-month old Mira grows up in.

“There are two possible Russias,” Bulat says. “One on hand, you have democracy, western values, human rights, and, yes, gays. On the other hand, there’s conservatism, Putin, the resurging Orthodox Church…I hope people see they have a choice and say, "I don't want to be on the crazy side. I want to be with the gays.’”