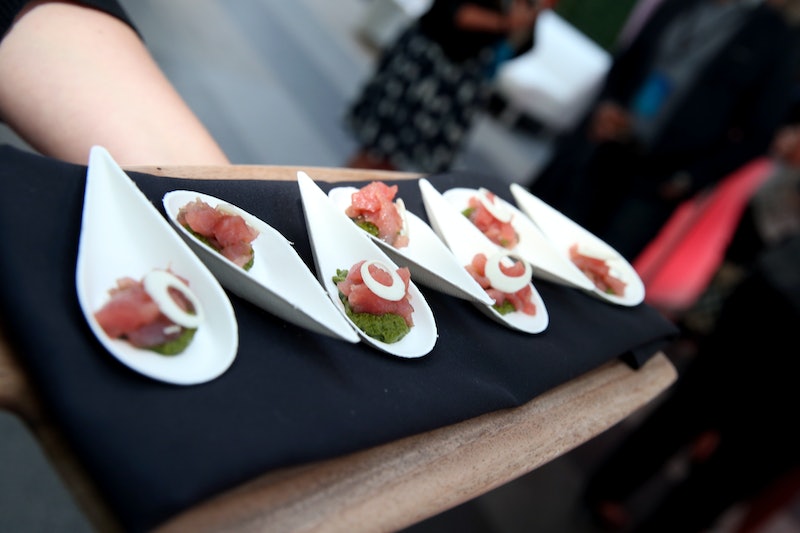 So you think you're a foodie? Well, you may just like paying extra for food. A new study from Cornell says that people's perception of food changes based on how much it costs, and the pricier a meal is, the better we think it tastes. So much for having discerning tastebuds.

The Cornell researchers used an Italian buffet in upstate New York for the study, manipulating the cost of the meal so that some diners paid eight dollars while others paid only four. For an all-you-can-eat buffet, that's pretty cheap either way, but according to surveys the diners filled out after eating, those who paid eight dollars enjoyed their food 11 percent more than those who paid only four. And even more interesting, the people who paid less felt that they'd overeaten and were feeling guilty about the meal, when in reality both groups ate exactly the same amount of food.

“We were fascinated to find that pricing has little impact on how much one eats, but a huge impact on how you interpret the experience,” said Brian Wansink, who oversaw the research.

And the questions this raises are numerous. I mean, could restaurants actually make customers happier by raising their prices? Could it be that the only reason we enjoy fine dining is because it's so expensive? And most importantly where can I find an all-you-can-eat buffet for only four dollars?

But actually, this does have some interesting implications about classism as it relates to food. We're all familiar with the ways in which cheap food is considered to be inferior, and this is often used as a way of shaming poor people for what they eat. As Stefanie Gray pointed out in The Guardian, you can see this in the differing responses to various "stunt foods." She points out that the cronut, for example, was heralded by critics, while KFC's Double Down was mocked as an unhealthy monstrosity, even though the cronut is slightly worse for you. But the cronut came from an upscale bakery, and so our perceptions of it bend accordingly.

And with this study it becomes clear that our classist assumptions don't just shape the way we talk about food — they may in fact shape the way we experience it. And that matters, not just because foodie hipsters might be even more pretentious than we already thought, but because turning up our noses at cheaper options may have more to do with our own internalized classism than the quality of the food itself. And in a world where poor people already get shamed all too often for their food choices, it might be about time to start challenging our own assumptions when it comes to food. Because, as this study suggests, it's kind of ridiculously subjective.

More like this
8 Money Saving Experts To Follow For Accessible Advice
By Maxine Harrison
These Are The 3 Most Mellow Zodiac Signs
By Kristine Fellizar
TikTok’s Viral Tunacado Sandwich Is The Internet’s Favorite Lunch Right Now
By Alexis Morillo
How Long Does Leftover Stuffing Last? Here's When To Toss It
By Chelsey Grasso and Alexis Morillo
Get Even More From Bustle — Sign Up For The Newsletter