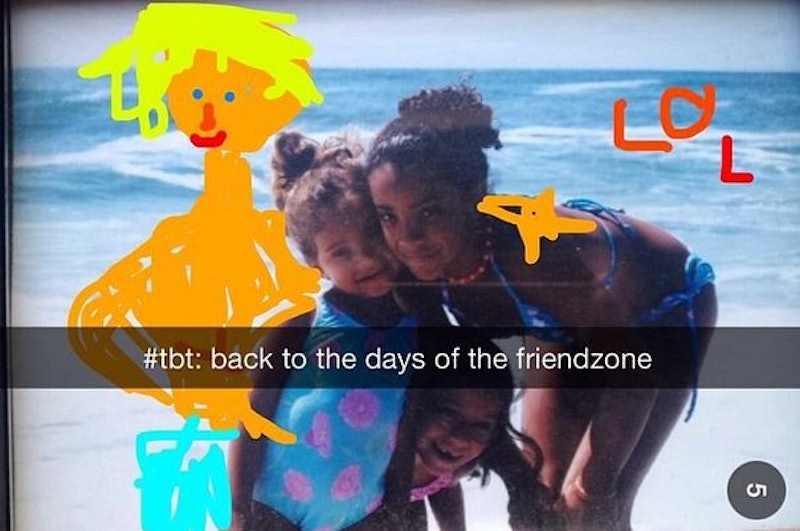 We’ve all got that friend who constantly uses social media to shove how happy she is with her significant other down our throats, right? It's annoying. Really, really annoying. But if I were friends with Instagram user @meandmyboifriend, I don’t think I’d mind nearly as much — because she created the perfect boyfriend with Snapchat. That’s right: Her beau is composed entirely of scribbles from the Pictionary-esque messaging app, and it is magnificent.

They really are perfect together, too. I mean, just look at all the amazing things they’ve done together! They’ve gone to the beach:

And sometimes they jump around outside Wawa, because why the hell not?:

(For those of you who aren’t familiar with Wawa, it’s a convenience store chain that exists mostly in New Jersey and Pennsylvania; it’s a magical place, so I can understand wanting to jump with joy every time you visit it.)

He’s super helpful, too. He’s tall enough to change the batteries in the smoke detector:

He can help you change a flat tire:

(Or, um... not. Go ahead, sweetie. You just keep sitting there while your girlfriend does all the work.)

And he definitely knows his way around a bar:

Now, I’ve never used Snapchat — a fact which may not be surprising, given that according to this chart, I am way too old for it (gee, thanks, TIME) — but if I did, I’d like to think that I’d use it for something as creative as this. Alas, @meandmyboifriend has beaten me to the punch, so clearly I’ll have to think up something even more genius. I’m not sure if that’s possible, but by golly, I’m going to try.

In parting, I would like to echo the question posed by The Date Report: Does he last longer than 10 seconds?