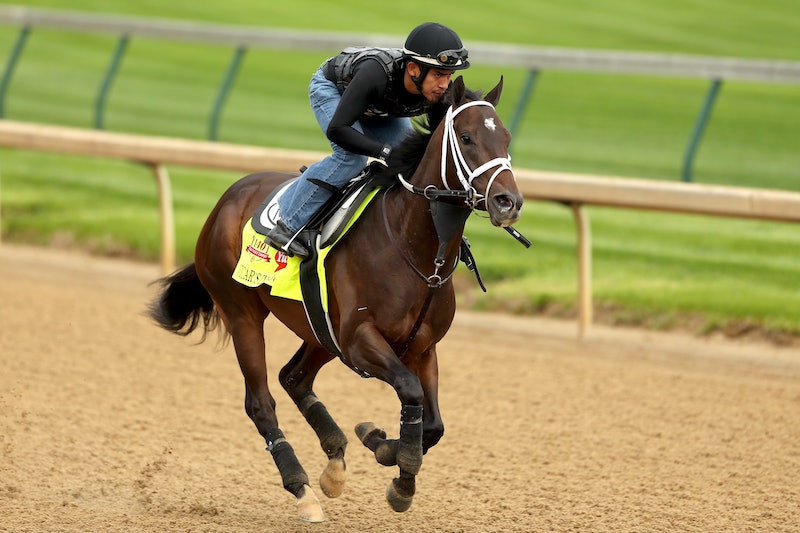 The Kentucky Derby, a time to drink mint juleps, wear fabulous hats, and I guess watch some horses race, will be Saturday, May 3 in Louisville, Kentucky. The Kentucky Derby is the fastest two minutes in sports, when a tested group of three-year-old Thoroughbreds race around a track for one-and-a-quarter miles for the honor of getting a blanket of roses draped on their back. On race day, 19 horses will take to the track.

To get to know them better, we've organized them — not by their season ranking, or the odds they're facing on Saturday, but purely by the awesomeness of their names. It is a scientific process determined by how much fun they are to yell after you've had 3-5 mint juleps. (After five mint juleps, we recommend taking a break and indulging in some burgoo, the traditional stew served at the Derby. We do not recommend using this list as a guide for betting, since it is compiled with absolutely no horse-y knowledge whatsoever.

This horse is so bored by the Derby, he's like "Sigh." His owner will show support for Wounded Warrior Stables on Saturday, when Uncle Sigh will wear blinkers with a purple heart.

This is a great horse name. It calls to mind all the danger and craziness of horse-racing. Unsurprisingly, people are saying Dance with Fate is a horse to watch on Saturday.

This horse is named in memory of the owner's family who recently passed away. It has the added advantage of being completely unique. He's never won a race on a conventional dirt track, but maybe Saturday will be his day.

Samraat, a term for a nobleman in India, also goes by the nickname "Cool Hand Luke." Now you know.

We're not sure how Vicar's in Trouble got his name, but he'll be ridden by a female jockey on Saturday, a rarity in the Derby and definitely something worth cheering.

His dad's name was Harlan's Holiday. He's like that, but more intense.

His dad's name was Curlin, making his name a little boring, but we still think "Ride on Curlin" is a top contender when it comes to fun names to yell.

This horse is literally named after Tony Danza. No, we're not kidding.

California Chrome is a favorite to win the Kentucky Derby, but his name's a little flashy for us. We like his owners' name better: they actually go by Dumb-Ass Partners.

This horse doesn't take his name from the famous baseball player. He's actually named after his first owner, Armando Rodriguez.

Vinceremos is Latin for conquer or overcome. It's a good, strong name, and he's a pretty cool horse: The inspiration for his name comes in part from a therapeutic riding center called Vinceremos for the challenges its clients take on.

Chitu is relatively fun to say, and he's named after one of China's all-time greatest racehorses.

This guy had a reddish coat when he was a youngin', and his dad's name was D'wildcat. Honestly, we like D'wildcat better. More fun to shout.

Tapiture's dad's name is Tapit, so perhaps we can give his owner a pass for naming this horse after equipment (taps) that you use to, you know, ride a horse.

Another horse with a name that is just a bit too descriptive. Who will command the curves? Why, Commanding Curve, of course! Still, this horse barely made it into the field, so he's a bit of an underdog. And everybody loves an underdog.

This horse isn't just strong. He's wicked strong. This guy's representing Boston on Saturday, and his owner's promised 5 percent of his Triple Crown winnings to victims of the 2013 Boston Marathon bombings, according to the Baltimore Sun.

You named your racehorse Medal Count? Really? Regardless of his somewhat absurd name, Med — can we call you Med? — is known for being the dark horse of the competition, and has come from behind to win in his best races.