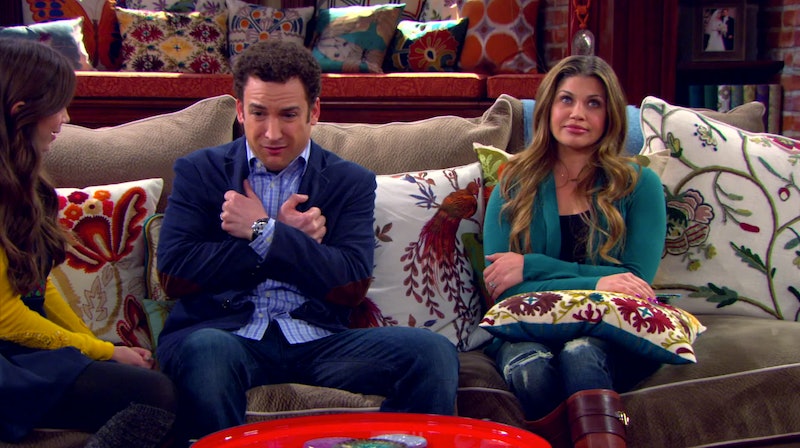 I've held back from calling out Girl Meets World because we all should have been more focused on begging Disney to put it on television already. It's been a year and a half since we first learned that the series was in the works. What were they waiting for? Girl Meets World has finally got a premiere date and it's very soon, which is both a good thing and a bad thing. The good thing is that the series looks amazing and is already giving me nostalgia feels. The bad thing is that the series has a lot to answer for.

Between the number of familiar faces who are returning for the show and the way they've made Riley Matthews, Cory and Topanga's daughter, a perfect blend of her parents, Girl Meets World has made it very clear that it's for old and new fans. However, old fans of Boy Meets World know that watching the show meant accepting a lot of unusual things. For example, that Mr. Feeny was somehow qualified to teach every grade up to and including college and was the only teacher that anyone really needed.

That aside, Boy Meets World left us all with a lot of unanswered questions that Girl Meets World needs to clarify during the new series.

Question 1: How did Cory and Shawn meet?

Boy Meets World was never really on top of its continuity. In one episode, Alan Matthews says that Cory and Shawn have been friends since Shawn "taught you to pick the lock on your playpen". In another episode, Topanga forces a feuding Cory and Shawn to reflect on their first meeting, which happened while Cory and Topanga were at the zoo and Shawn saved Cory from an animal pen. They were a little too big for the playpen by then.

Question 2: When did they meet Topanga?

The story on how the Golden Trio that came before Harry Potter's Golden Trio actually met each other tended to change from season to season. Did Cory and Topanga meet first or did Cory and Shawn meet first? And how old were they? Cory and Shawn don't seem to know Topanga in season one, where her every action and word are a source of surprise, befuddlement, or derision for them. But later the show claims that Cory and Topanga have known one another their whole lives.

Question 3: Where did Minkus disappear to between season one and season five?

Stuart Minkus was a main character in Boy Meets World season one, acting as Shawn's main rival and Cory's rival for Topanga's affections (not that Cory was interested yet). Since Minkus will be returning for Girl Meets World, maybe we can finally find out exactly where he was between the end of elementary school and high school graduation. According to him, he was just "in the other part of the school". Yeah, we're going to need a better explanation than that, Minkus.

Question 4: How many siblings does Shawn have?

In an episode of season one, Shawn helped Cory perm his hair with assistance from his older sister, Stacy. In another episode, Cory watches Shawn have a showdown at the trailer park with his half-brother Eddie. Eventually, Shawn and Cory would make it to college where they'd meet Shawn's half-brother Jack. Eddie and Stacy were never mentioned again, if they even still existed by the time Jack came around. Exactly how many members of the immediate Hunter family are there?

Question 5: Where is Topanga's sister?

Did you know that Topanga had a sister? It's all right. Neither did Boy Meets World. One early episode had Eric salivating over Topanga's very attractive older sister, Nebula Stop-the-War Lawrence, who was never mentioned again for the rest of the series. If her middle name was Stop-the-War, I can't imagine what Topanga's middle name must be. Then again, as one person pointed out when Topanga refused to admit it, "Your first name is Topanga! How bad could your middle name be?"

Question 6: When did Cory fall in love with Topanga?

The grand love story of Cory and Topanga was an inspiration to an entire generation, but it also has the most confusing beginning in the world. Cory states at various times that he fell in love with Topanga when she kissed him by the lockers, when they were catching fireflies as kids, and when they were playing at a playground as toddlers. We get the general point that he's loved her all his life, but, seriously, which is it?