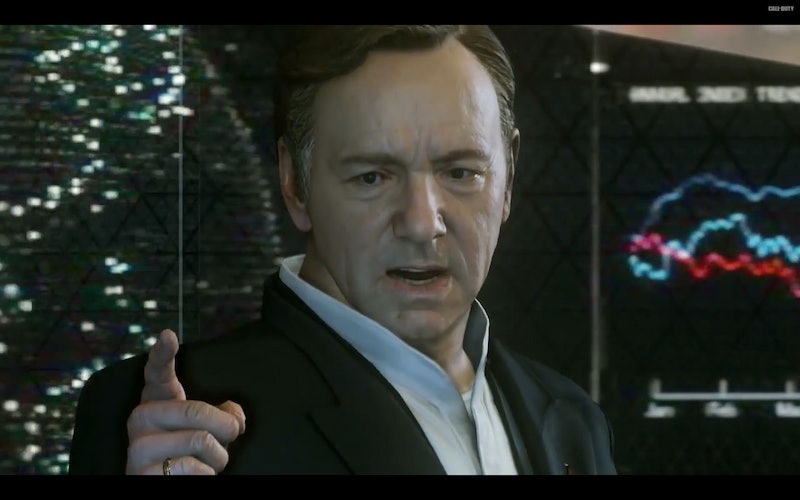 Kevin Spacey confirms, once again, that he has a finger in every pie. A clip from Call of Duty: Advanced Warfare was leaked online earlier this week, which resulted in Activision and Sledgehammer Games posting the official Advanced Warfare trailer on Thursday instead of Sunday, as planned. The even bigger surprise? According to Destructoid and PC Magazine, animated Spacey appears in Call of Duty as the antagonist of this latest installment of the game, leading a corporation that seeks power through any means necessary. In a Tweet and an Instagram from the Call of Duty accounts, we are treated to a close-up of what appear to be Spacey's wily, lidded eyes.

"Ideas don't determine who's right," he intones, "Power determines who's right." Frank Underwood is surfacing yet again, this time as the head of a militaristic company. Perhaps he's turning into Raymond Tusk, after all.

While my experience with video gaming consists mostly of me walking repeatedly into corners before being mercy killed, this is a story I could get behind. In a way, video games even more than films can enlist our help in living idealized versions of our current world. The active involvement necessary in playing a video game makes the viewer, the entertained, implicit in whatever action results. While films engage our voyeuristic tendencies, video games drags us along every finger twitch of the way.

In this case, Call of Duty is rallying its troops behind the idea that corporations, rather than countries, pose the next greatest threat to our modern democratic state. While democracy has, in many ways, failed as an export, that doesn't mean that it should be overthrown in favor of a "might makes right" version of capitalism. If you watch the trailer, that's exactly what Spacey's character is calling for.

This trailer is the antidote to the bewitching caress of Spacey's southern drawl on House of Cards. Despite the fact that we have seen him kill on the show, we root for Frank Underwood. We want to see him win, merely for power's sake. His is a delicate art, and a highly entertaining one at that. While Call of Duty may not present the same theatrical finesse, it takes Underwood's character — for, even in the absence of the accent, this man lives on power — and blows him out of proportion, arming him with men and weapons rather than men and pork barrel projects.

It shows us that, if we want him, he can be bigger than life. He can realize, in this game, the large-scale violence that can only be implied on House of Cards. It's a freeing moment for both Spacey and his audience, to see him overstepping the bounds of politics entirely. And, perhaps, it's the moment we've all been waiting for.