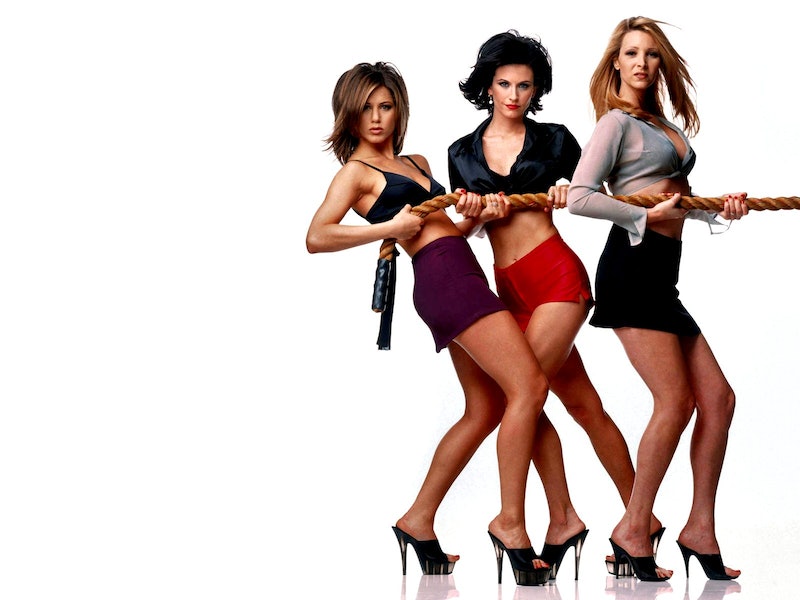 Friends isn't simply one of the most well-known TV sitcoms OF ALL TIME: it's also the definitive 90's sex-cyclopedia, a sampling of the general thoughts, feelings, and anxieties people in the 90's had about sex. Or is it the other way around? Did the general population of Friends watchers fall into their sex and dating behaviors (i.e. the infamous "break") based on what was modeled on the show? Even if you've never watched Friends, you've probably definitely mentioned "being on a break" at some point in your life. The sex-ploits and quotable moments we saw on Friends have trickled down into the general population and become part of the day to day language we use to talk about sex and relationships, so much so that hundreds of years from now (if the world hasn't imploded/been engulfed by the sun/been destroyed by climate change/still exists) people will probably be unearthing old Friends DVD' and using them to study 90's era dating rituals. Imagine!

In honor of the ten-year anniversary of Friends finale, we've compiled nine invaluable lesson about sex that, whether by directly watching or by seeping into our general consciousness, we've learned from the show:

A good back story (or totally fabricated lie) can work wonders for a dry spell. Also, is Joey a sex addict?

2. When in doubt…employ the boob trick

…and know that condoms are only effective 97% of the time.

ALWAYS make sure both parties are aware of the rules and boundaries stipulated in "the break".

Maybe don't begin an evening of sex-capades with carnitas from the taco stand down the street. Or do. NO REGRETS.

One day, you'll find your lobster.

"I'm sorry, it was a one time thing. I was very drunk and it was somebody else's subconscious."

- Ross and Chandler in The One With the Ick Factor

The more you know.