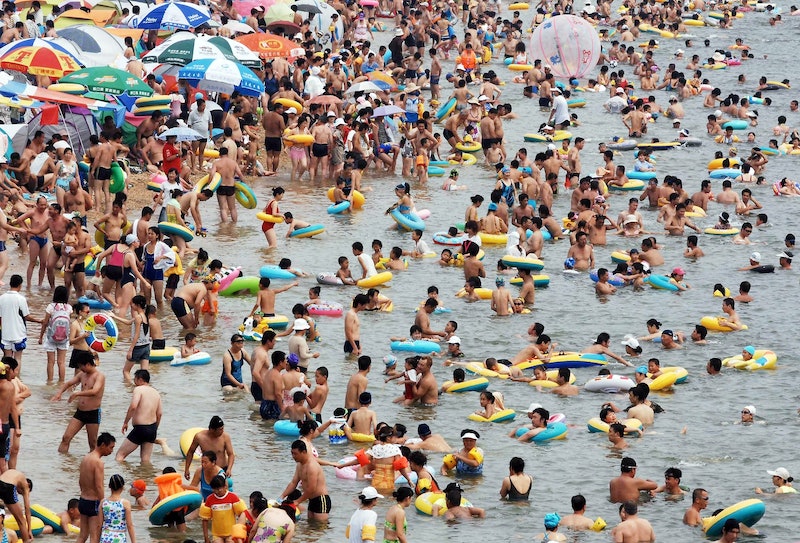 If you live somewhere with icy cold winters (made icier and colder by the recent, demonic Polar Vortex) and blazing, satanic summers, you know what's coming. We're well into May, which means that pretty soon, people will be complaining about how much they miss winter. It happens literally every year: instead of the chattering cries of "It's so effing cold!," once summer is in full swing, we'll be hearing sweaty grumbles of "It's so effing hot!."

Where was this appreciation for Old Man Winter when it was still cold and snowy out? Nowhere, that's where. Kids these days, I swear ...

Admit it — right around that six-month marker is when you start to change your tune. You'll surely do it again this year, once the temperature starts climbing above 80. (And we will too.) But as the sun is beating down on you; as beads of sweat start to pour into your eyes; as you curse the heat and swear you'll never go outside again, remember, you have your reasons for missing Jack Frost. Yes, he was a bitch this year, but we had our reasons for loving (aspects of) him. Here are a few things we'll actually miss about winter.

Electric companies evilly increase their rates in the summer, so whether you have an air conditioner or decide to go the ol' ice-in-front-of-a-fan route, you're still going to be paying out your ass for electricity. (In other words, go ahead and splurge on that AC unit.)

Sitting Inside and Binge-Watching Netflix Without guilt

When it's winter, nobody cares that all you want to do is bundle up on your couch and watch X-Files in five-to-seven-hour increments (mainly because they're doing the same thing). When the weather starts warming up though, people are obsessed with being outside, and suddenly sitting inside all day in your over-priced icy air is a crime against humanity.

If you do decide to go out, you'll be faced with alarming crowds. As the temperature rises, so does the sheer volume of strangers you find yourself trying not to brush up against. Plus, all these people will most likely not be wearing a lot of clothes, thereby increasing your chance of accidentally touching way more sticky, sweaty skin.

On the flipside, when it's super cold outside, you have the perfect excuse to cozy up to your boo. You have to place your bodies upon each other to stay warm!

Not Having To Wait in Crazy-Long Lines

Yes, of course there are lines for things in the winter, but, again, more people = longer lines, for everything from movies to ice cream (especially ice cream, because most people foolishly think ice cream can only be eaten when it's warm out).

Some people look better in short shorts and tube tops, and that's great for them, really. The rest of us, however, like to layer. We love big cozy cardigans, or maybe just think our thighs are nobody else's business.

Not Being Able To Build Snowmen

Do you want to build a snowman? Well, you can't. Not in the summer anyway, despite what some people (ahem, Olaf) might think.

Once you reach a certain age, your life will suddenly become consumed by weddings, and the majority of them will take place during the summer. Why? Because only about seven percent of weddings take place in winter. Them were the days.