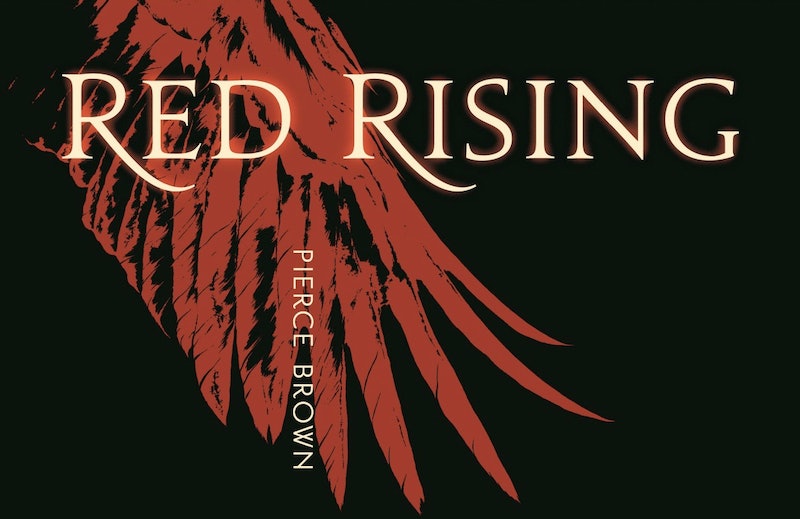 Who remembers when Red Rising came out? Published near the end of January, the YA book, written by newcomer Pierce Brown, has been awarded excellent reviews and has been compared to the Hunger Games series. I can’t stop thinking about Red Rising, and scenes from the epic novel debut continue to haunt me. This is not a book you read and then place on a shelf to gather dust. It’s a book that stays with you. You’ll keep pulling it out to reflect over a passage or consult a map.

Reading allows us to experience emotions we’d rather avoid in real life, and to process them as we watch how characters respond to these emotions. Much literature has provided this type of cathartic release, but few have accomplished it as deeply as Red Rising. We are drawn into Darrow’s story intensely as we experience his emotions alongside him. This book is a dystopia that never feels jaded, and an anti-government saga that doesn't feel cynical. Rage, frustration, friendship, loyalty… these emotions are deep within Darrow’s struggle against the oppressive Gold society, but the book inspires rather than disheartens.

And that's why this series has the potential to be bigger than The Hunger Games. (There. I said it.) Don’t be offended, Hunger Games fans; keep your Katniss love, but make room in your hearts for this series that will thrill you in new ways. With the screen rights purchased by Universal Pictures back February, but the movie still a few years away, you have time to read the books first and convince all your friends to do the same. Here are 11 reasons why:

Through her battle scars, struggle with the Mockingjay symbol, and evolving love for Peeta, Katniss learns about her place in a changing world, but she remains essentially the same person. By the end of Red Rising, however, Darrow is becoming someone that people from his past may no longer recognize. Darrow’s growth is tempered with the realistic side effects of anger and loss, forging his strong identity and making him seem more like a real person, who has both light and darkness inside.

2. THE LINES BETWEEN GOOD AND EVIL ARE INDISTINCT IN RED RISING

In The Hunger Games, we see Katniss and the resistance battle President Snow and the government. Even when Katniss shoots President Coin, she remains on the side of the resistance. Darrow, however, doesn’t simply fight against the Golds, but enters their world, and that action holds tremendous consequences for how he views himself and his fight.

Page 45 is a new record, even for the saltwater reservoirs in my eyes. I had already been so drawn into the characters and their relationships. The event that made me cry haunted me for the rest of the novel.

History shapes Darrow’s world, the society of the Golds, and the decisions of key leaders in power. The novel illuminates our human efforts to build upon our history even as we forget important lessons we’ve learned. Brown allows history to provide definition to his story, rather than borrowing a few Roman names and concepts.

5. WHILE LOVE TRIANGLES ARE FUN ON THE BIG SCREEN, THEY'RE NOT SO FUN IN REAL LIFE

Katniss experiences a complicated emotional struggle over the men in her life, and readers hold strong emotions concerning Gale and Peeta. Red Rising dispenses with the overused love triangle and brings us a love story we can relate to. Darrow’s love life is more down to earth and relevant, and as a reader, you’ll immensely enjoy his pursuit of true, lasting love.

6. THE SCOPE OF RED RISING’S FUTURISTIC SOCIETY IS BROADER

Red Rising takes the imaginative landscape one step further, from a post-society earth to a terraformed Mars. Not only does Darrow’s story contain dystopian elements, but it adds layers of science fiction and fantasy as well.

7. DARROW UTILIZES DIALOGUE NOT SIMPLY AS A VEHICLE FOR CONVERSATION, BUT AS A MEANS TO DELVE INTO PHILOSOPHY

Darrow’s struggles with morality are gripping. As we observe his inner labor, readers gain ample opportunity to think through their own moralistic stances without the thought process becoming too weighty or exhausting. Darrow’s musings on philosophy, far from being dull, will cause you to devour the novel.

What if Katniss’s crew had made the mistake of holding games with the children of the old government? Such an error doesn’t happen in Panem, and instead, we get the sense that Katniss’s actions are always justified. However, one solid aspect of Red Rising is that it incites debate by allowing flawed decisions, rather than simply convincing you to take the side of the protagonist.

9. YOU'LL TRY TO PREDICT THE NEXT TWIST… BUT YOU'LL BE WRONG

As I delved into Darrow’s mind, I was able to anticipate a few of the plot developments, but several twists fired off near the end were simply astounding, and made me appreciate a good plot twist all over again. But I don’t want to spoil them for those who haven’t picked up the book yet... so get reading.

10. DARROW EMBRACES HIS MISSION, WHILE KATNISS FIGHTS AGAINST HERS

At first Darrow is uncertain that he’s entirely willing to work with those who want to fight the Gold society, but accepts when he is able to internalize his mission. If Katniss had embraced her role earlier, even while harboring a few lingering reservations, she could have grown deeper as a character. Her potential is lost in indecision, but Darrow’s acceptance allows him to struggle with deeper moral issues.

Brown uses slang and unique combinations of words to beckon us into the world of Darrow, and in doing so, reveals the intricacy of the world he created. Above the invented words wafts a song whose lyrics dance through the pages and lives of the characters. The poetry of Red Rising strategically places us in Darrow’s world in a way that most books never even attempt.

Now please excuse me, I’ve gotten so excited about Red Rising while writing this that I need to go read it again.