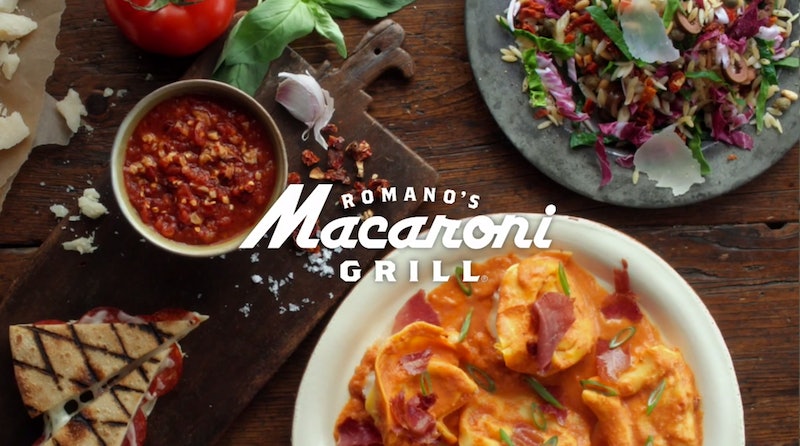 In a new Romano's Macaroni Grill ad, the Italian restaurant chain hypes up a few items from their three-course Spring Tasting Menu. One of the featured dishes: a bowl of four cheese tortellacci. I've seen this TV spot countless times, but it took several viewings before something dawned on me: I don't know what tortellacci is. I could've made some Food Network-educated guesses, sure, but I would not be certain. I should know what it is, I thought. This is embarrassing.

I could be alone on the "I don't know what tortellacci is" boat, but I'm going to go out on a limb and assume there others out there who are on board. Let us set sail (i.e., find the answer)!

Whaddya know? Some quick research did the trick: A tortellacci is a sheet of pasta folded around cheese, spinach, meat, seasonings et cetera. Sounds delicious. As Carinos.com explains, a tortellacci is an even bigger tortelloni, which is just a bigger tortellini. Sounds super delicious. Also? I totally should've guessed tortellacci was in the tortellini family. The "torte" part should've clued me in. D'oh, Rohwedder! "Torte" comes from torta , which means "cake" or "round bread." The Italian suffix -ini translates to "little," -oni to "big," and -acci to "roughly made." A tortellacci is not a roughly made cake, but a roughly made pasta pocket.

Though I have not tried tortellacci, I am confident in saying I love it. Tortellini and tortelloni are out of sight (give me all of the cheese-stuffed pasta, please), and tortellacci is a giant tortellini/tortelloni. Therefore, tortellacci is more or less the pasta of my dreams.

Here's the ad that inspired me to go on my tortellacci journey: