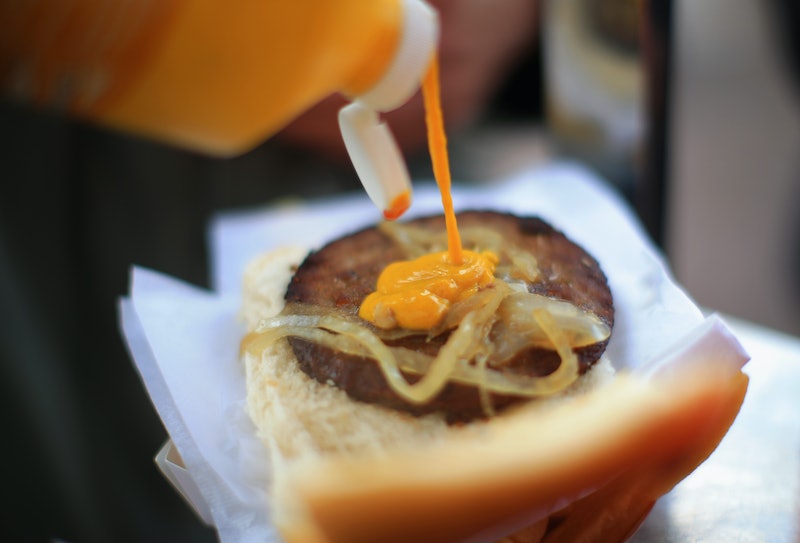 This week's new episode of Mad Men delivered a huge blow to our beleaguered hero Don Draper and a big opportunity to Peggy Olson. When SC&P lands famous burger chain Burger Chef as a client, Lou (you know, the ad guy with Don's old job and two horns hidden under that grey hair of his) gives the responsibility to Peggy and assigns Don to be one of her underlings. And while that situation gave the episode tons to work with — Don refuses to do the work for the woman he hired and Peggy struggles to go tough on her former mentor, even if he is being a brat — it also gives us a bit of a savory question: Can we eat at Burger Chef?

The short answer is "no." But the long answer starts with a "sort of." Burger Chef is a fast food joint that started in Indianapolis, invented the Flame Broiler (sorry Burger King), and was at one point bi-coastal. So why would SC&P get so stoked about a measly ol' burger chain? In the late '60s, Burger Chef was almost as big as McDonald's.

It was so big, it even had its own mascot with a famous voice actor: Burger Chef, voiced by the AristoCats' Paul Winchell. Burger Chef's sidekick was named Jeff, as the owners were apparently very into rhyming.

While you can't visit a fast food location that sells Burger Chef specialties, you can visit the establishment that bought Burger Chef: Hardee's. The company that owns Hardee's bought out Burger Chef and converted most locations to Hardee's restaurants (that's Carl's Jr. to you, West Coasters). So, next time you get yourself an "Original Thickburger" (Seriously, Hardee's? That's your speciality?) or Carl's Jr's Famous Star burger, just know you're getting a taste of Burger Chef.

Though, that probably won't help Peggy get Don do some actual work for her.