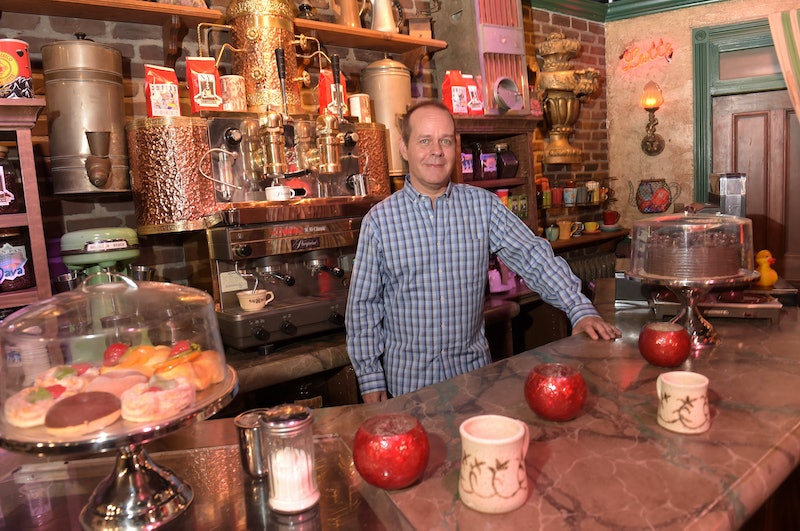 Picturing the stars of Friends seems like a no-brainer: Clearly, it's the six turtleneck and vest clad kids dancing in a fountain to The Rembrandts during the opening credits — the characters whose love and loss and, yes, friendship we watched unfold over 10 long years and countless laugh-tracks. Sure, maybe you have a soft spot for a recurring guest star, or want to make a case for Ugly Naked Guy as the Tino of the series, but in the end, it's pretty much Rachel-Ross-Monica-Chandler-Phoebe-Joey all the way. In fact, it's all too easy to forget that lurking ever behind them, often literally, was everyone's favorite coffee shop owner with a teutonic name and a fast-receding bleach job: Gunther, AKA actor James Michael Tyler, who ultimately clocked 148 episodes (185, if you trust the Friends Wiki site) out of a total 236 — putting him head and pastel-clad shoulders above every other guest star in terms of hours on set.

So much energy is devoted to chronicling the whereabouts of the show's main stars (the will-they-won't-they reunion dance, et al.) that it seems high time we turned to Friends' second most visible fixture: Just where has Gunther gone after all these years — and for that matter, where did he come from?

James Michael Tyler's story is the kind that gives struggling actor-slash-servers all the more reason to keep scraping along, lest they lose out on their shot to live the dream: As he explained in an interview with TVweb, in 1994, he was working at a Hollywood coffee shop called The Bourgeois Pig, trying to support his sporadic acting career, when an AD friend took note of his barista abilities and cast him behind the counter on the café set of a fledgling sitcom, with a compensation rate of one free meal per day.

Soon, however, this little show took off, and so did Tyler's background role. By mid-Season 2, he was afforded a stray baritone one-liner — a simple "Yeah" at first, in response to an inquiry from Ross — and from there, he quickly blossomed into a full character: Gunther, the former soap opera actor with a talent for Dutch and an undying, unrequited love for Rachel.

Though she finally did turn Gunther down explicitly in the last episode, leaving the character with a bittersweet ending at best, Tyler's future was only brighter thanks to Friends. Sure, it was no Joey — but in 2009, for example, Tyler put in a series of special appearances at a pop-up replica of Central Perk erected in London to commemorate the show's 15th anniversary, marking the fifth time he'd traveled across the Atlantic for a Friends-related event. Even these cross-continental promotional stints were ultimately spun into a cameo on Matt LeBlanc's ever-meta series Episodes in 2012: Tyler played himself, called to London at the last minute for a cameo on LeBlanc's show-within-the-show after all of the other Friends cast members refused.

But thankfully, it's not all coffee shop rehash: Though "Gunther" is still by far his most prominent role to date, Tyler also had a one-off spot as a couples therapist on Scrubs in 2005; midsize parts in a few lesser-known films (2009's Jason's Big Problem , 2010's Keeping Up with the Downs ); and, most recently, a starring role as a record label exec in the satirical webseries Modern Music , which was an official selection of this year's LA Webseries Festival.

So perhaps there's a lesson to be gleaned from Tyler's tale: Befriend some ADs, learn to barista, fry your hair to within an inch of falling out, and you, too, could make it in showbiz. Or at least make a decent cup of coffee — Central Perk-worthy or bust.