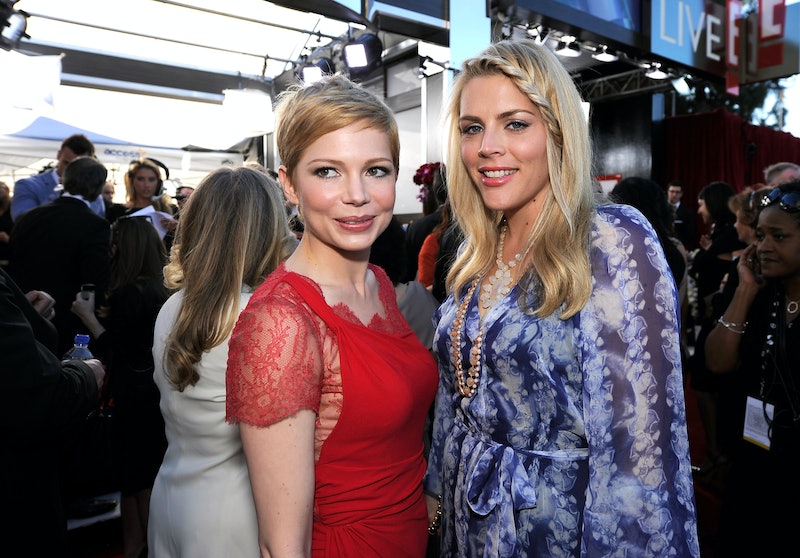 Dawson's Creek girls stick together. Busy Philipps paid Michelle Williams a visit this week to support her friends' latest career effort. Williams is currently taking a break from films to star in the Broadway musical Cabaret, and, naturally, Philipps just had to see her friend's big moment. The Cougar Town star snapped an Instagram selfie in Williams' dressing room of the two of them, which she captioned with: "I am so proud, I can't stand it."

I've wanted Philipps to be my fictional BFF ever since she played the bully-with-a-heart-of-gold, Kim Kelly, on Freaks and Geeks, but it seems that Williams already has that job. The two met on the set of Dawson's Creek in 2001, when Philipps joined the cast as Audrey, Joey's (Katie Holmes) new college roommate in Season 5. (Philipps was bumped up in the sixth and final season to a series regular, thus solidifying her status as a true Dawson's Creek girl.) She stayed in touch with Williams over the years, and even took her as her "date" to the Golden Globes in 2012. (Which, apparently, set off a whole bunch of rumors that Williams and Philipps were in a lesbian relationship. What, celebrities can't have girlfriends, too?)

The two of them are adorable together, and it's so nice to see Hollywood actresses supporting one another. (It's a nice change from all these who's-now-feuding-with-whom rumors that get tossed around daily.)

Aww, just look at these two. I bet they bought one of those half-heart BFF necklaces from Claire's back in the day. If they are ever expanding their best friend circle, I'm totally in.