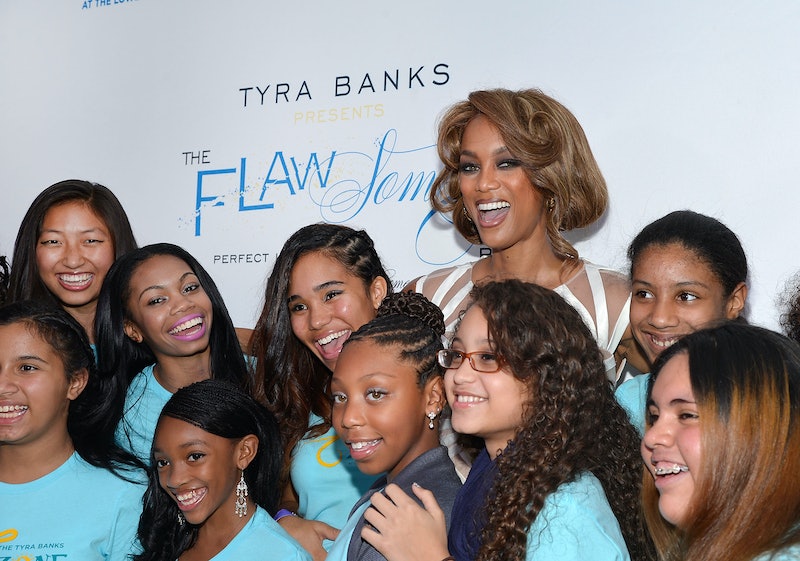 Tyra Banks might be a former supermodel, but even she isn't immune to insecurities about her body. Tyra sat down with People this week and opened up about her own insecurities regarding her body image. The America's Next Top Model host admitted that she faced scrutiny as a teenager, when she was labeled "too thin" by her peers:

The summer I turned 11 years old, I lost 30 lbs. and I had a growth spurt... Some people thought I had an eating disorder. There was nothing I could do to gain weight... It was in the 1980s during the Ethiopian famine, and I got a lot of comments.

Tyra proves that body image is a problem for people across the board. She tells the magazine that despite her struggles with being "too skinny," the model also faced criticism as an adult when tabloids speculated that she may have gained some weight.

Tyra's combating these body snarkers the best way she knows how: by helping to create a generation of girls with a serious sense of self-confidence. The mogul created the TZONE Foundation in order to combat some of this body bullying. The foundation works with young girls to instill them with the confidence they need to see their own beauty, both inside and out, and Tyra will be hosting TZONE's Flawsome Ball on May 6 in New York City.

If you're wondering what exactly "flawsome" means, it's another Tyra neologism. (Anyone remember when she made "smize" a thing?) "Flawsome" is Tyra's way of showing that your perceived flaws can still be totally awesome, which, she says, is the key to having confidence.

Say what you will about Tyra, but it's nice to hear that someone who made a career off their hot body is admitting that they didn't always feel so great about themselves. It's easy to assume that models and actresses who are celebrated for their beauty don't ever have days when they feel bad about themselves, but clearly that isn't the case. Just like it does with us "normals," the constant pressure to live up to a certain beauty standard can take a toll. (At least our "blah" days don't become tabloid fodder.) It's great that Tyra is using her own insecurities to inspire girls to live up to their potential.

Let's hope that "flawsome" (or at least the sentiment behind the word) catches on.

More like this
This 'Hunger Games' Alum Will Star In A New Medical Drama Titled 'A Mistake'
By Alyssa Lapid
Sandra Bullock, Girlboss Extraordinaire
By Matt Harkins & Viviana Olen
Spice Girls’ Net Worth: The Richest Member Is Wealthier Than The Rest Combined
By Hugh McIntyre
Harry Styles Opened Up About Olivia Wilde With A Rare Comment About "Trust"
By Sophie McEvoy
Get Even More From Bustle — Sign Up For The Newsletter