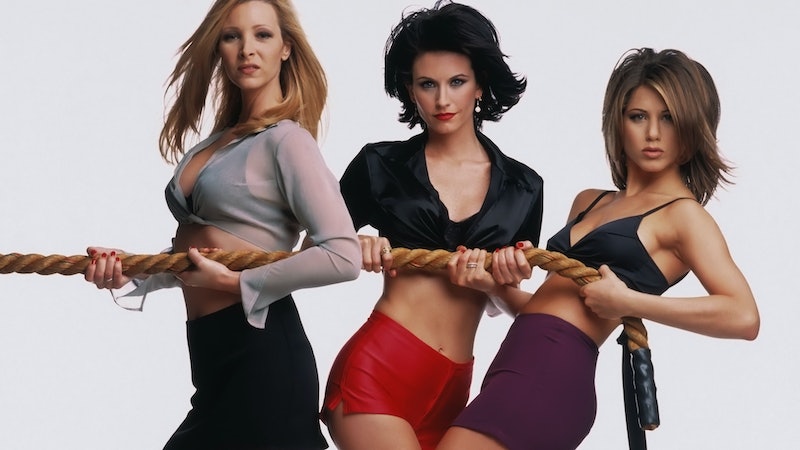 The tenth anniversary of the finale of Friends is on Tuesday and that's probably unbelievable news to hear. This means that Monica and Chandler's children would be ten years old and that Emma would be 12. I know they're fictional, but that's crazy, you guys! We know in real life the cast has gone through some big changes too. Jennifer Aniston broke up with Brad Pitt and became constant tabloid fodder. Courteney Cox joined the ridiculously titled Cougar Town. Matt LeBlanc's hair turned gray! There's a good chance that you remember what you were up to when the series finale aired. I was finishing up my freshman year of high school and now look, I'm gathering ridiculous photos of the Friends cast. Ah, how times have changed!

Because it's too emotionally draining to think about how ten entire years have passed since Rachel "got off the plane," it's probably best you bury your fears about the passing of time and look at funny photos instead. The Friends cast took A TON of embarrassing promotional stills over the years for the show and they did everything from pretending to drink milkshakes to looking like they're in an add for K-Mart exercise wear.

The One Where They Were Zumba Instructors

If you’re wondering what’s going on with the rope here, all I can say is prepare yourself for a multitude of random props.

The One Where They Were In Bathtubs

The One With The Tiny Couch

The easiest way to make your show look inviting is to jam the entire cast onto something that should only fit two people.

The One Where All Their Heads Were Stacked

…and they all managed to keep straight faces.

The One With Whatever This Is

Seriously. What is going on here?

The One Where They Were Serious Actors

The One With Chandler's Finger Guns

Could he be pointing with any more enthusiasm?

The One With The Bed

There must be something to showing the entire cast laying on one bed because Gossip Girl did this too.

The One With The Frame

This one’s a classic!

The One Where Everyone Became Construction Workers

Rachel’s beret is a nice touch.

The One That Foreshadowed The "Break"

Because he took a time out from her? Get it?!

The One Where They Rode A Horse

This is already plenty strange before you realize the horse has been digitally altered to be long enough to fit everyone.

The One With The Siblings

The One With The Shapes

… but apparently it was a theme.

The One With The Clock

They’re all so happy!

The One With Everyone's Faces

This is like one of those kitschy photos with the floating head in the background, but six times as creepy.

The One With The TV

The most surprising thing about these is that none of the actors ever looked skeptical. You are posing next to a pink television, Jennifer Aniston!

The One With The TV & Ross

The One Where Rachel Presented Everyone

Also, what is Ross doing to Phoebe’s arm?

The One Where They Paired Off

No one knew at this point that Chandler and Monica would end up together.

The One With The Milkshakes