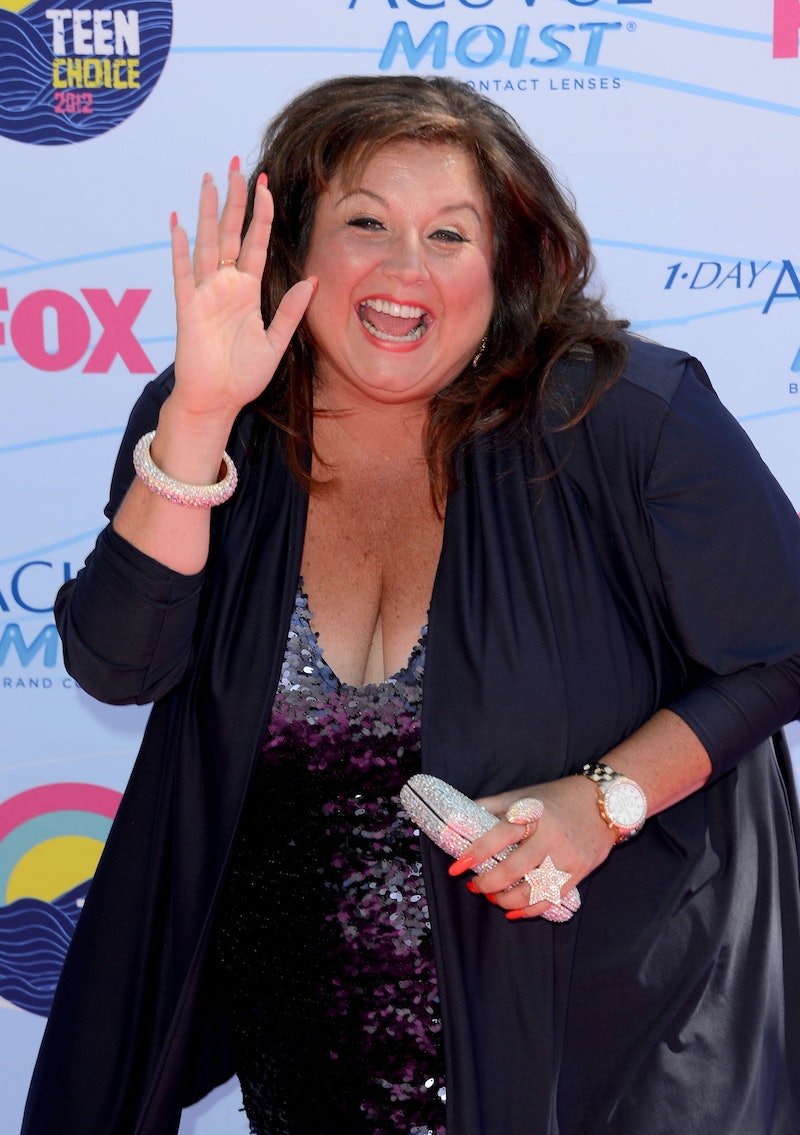 Say what you will about the star of TLC's Dance Moms, but Abby Lee Miller is no joke. Well, technically she is a bit of a joke — she’s a dance teacher who seems like she couldn’t possibly have executed a pirouette in decades and she reads like a Disney princess villain: 80 percent of what comes out of her mouth is said simply to terrify little girls. But working under her tutelage is no laughing matter: she is demanding, she has a short fuse, and she knows her shit when it comes to dancing. So those Dancing With the Stars contestants might just be shaking in their Ugg practice boots right about now, knowing that she'll be the DWTS guest judge on Monday night's episode.

On her own show, Dance Moms, ALM puts the fear of fifth position into the hearts of the six to twelve year old dancers in her studio, Abby Lee Dance Company, and the mothers who drive them there everyday. But she doesn't just set the Mom's teeth rattling; her "abusive" techniques caught the attention of Mark Ballas and Derek Hough back in 2012 when Dance Moms was still in its first season. Abby's techniques made Hough "livid" on Twitter, and didn't match up with his belief that "discipline and a strong work ethic" are the steps to becoming a successful dancer. Ballas helpfully added, "She's an A Hole." Stong words, Mark. I hope he can back them up tonight when Miller turns her brutal honesty toward judging the Stars' routines with their not-quite-professional partners — and if the Golden Boys of DWTS fear what Miller might have to tell them, then shouldn’t everyone?

Abby’s most notorious line is probably cross-stitched on a throw pillow on her California King, with bed posts carved to look like all of the children she’s broken through the years, like that statue in the Ministry of Magic under the Death Eater’s rule — you know the one. To Abby, no dancer is the best she’s ever seen, even if they’re considered to be something special by everyone else. In fact, she’ll probably like you less if everyone thinks you’re special. Gird your loins, Derek and Amy.

Speaking of "special," it's not really a word in Abby Lee Miller's dance vocabulary. She's not interested in a sob story; she doesn't care if Danica broke her rib or James and Peta are secretly doing the deed. She's looking for good dancing, perfect technique, flawless performances. PERIOD.

“Girls, what are you doing? Those legs are about as straight as Elton John.” — Abby Lee Miller

ALM has similes and analogies for days, and they’ve got staying power. If a DWTS contestant finds one of these perfectly worded barbs directed at them, it might just stick for the rest of the season and effect viewer perception and voting. Oh yeah, I was going to vote for Candace Bure, but I heard her lifts are about as graceful as Edward Scissorhands trying to shoplift a bag of bells. (Is that good? Did I do it right?)

"Are you crying? No tears. You save those tears for your pillow, in your room, alone. You're going to humiliate yourself in front of everyone in this dressing room. Do not cry. Suck it up, kid. You are here, you're healthy, you are one lucky little girl. Act like it." — Abby Lee Miller

The general shtick of a guest judge is to come in as a former contestant or a musical performer and tell these sappy knuckleheads how far they've come, how they're such big fans of watching them at home, and how everything they do is just so moving. If Abby Lee Miller holds the DWTS contestants to the same standard she holds hew own child dancers, that will not be the case on tonight's episode. ALM is a stone cold professional. She knows all of those C-listers are lucky to be there, and she's not going to hold back on telling them exactly how they danced. Do your damnedest, pro dancers, Miller will accept nothing short of perfection.