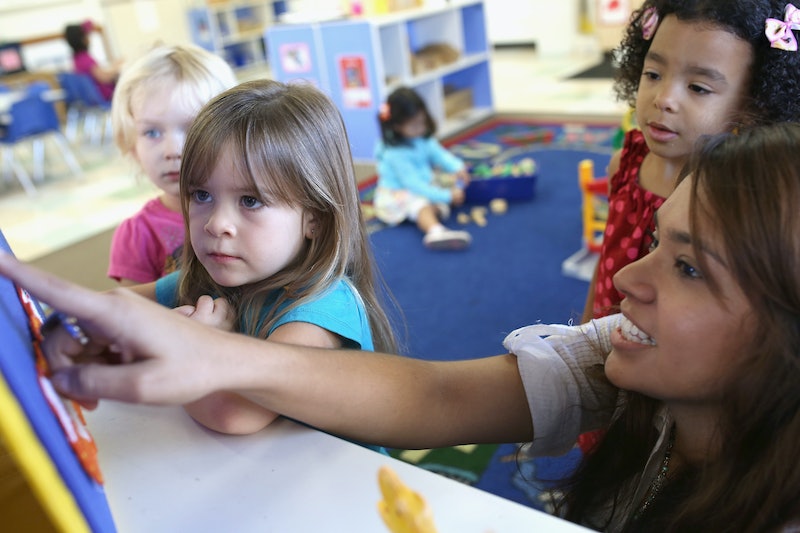 There's a shortage of minority teachers in America. According to a report from the Center for American Progress, non-white teachers make up just 17 percent of educators in the public school system. But minority students comprise more than 40 percent of the student body, and this number is only expected to grow. While this continued disproportion between minority students and teachers may seem purely cosmetic, studies have suggested this discrepancy may result in a serious educational gap.

According to three economists from the National Bureau of Economic Research, minority students tend to perform better when taught by minority educators. Their research showed that "black, Hispanic, Asian and Native American students are 2.9 percent more likely to pass courses with instructors of a similar racial or ethnic background." While this research was conducted at college level — their evidence was based off of studies done at California’s De Anza College — there's little reason why these findings can't be extrapolated to the pre-collegiate level.

According to the study, when classes are taught by a minority instructor, the dropout and pass rates for minority students fall by around 50 percent compared to classes taught by white teachers. Moreover, when African-American students have African-American educators and are allowed a "full set of ethnic and racial interactions...the class dropout rate relative to [white students] is 6 percentage points lower." Most impressively, however, are the academic performance statistics: when minority students are taught by minority teachers, the researchers found that 13 percent more students attained a B average.

The paper's authors attribute these patterns to a phenomenon known as the "role-model effect," in which students who are able to identify with their teachers based on similar racial or ethnic backgrounds are inspired to achieve at higher levels. When these students see an individual of the same background attaining success, they are inclined to attempt to emulate his or her behaviors.

Lately, this has been particularly salient with female leaders inspiring young women to develop goals and ambitions previously thought of as "lofty" or "unattainable." MIT economist Esther Duflo conducted a study that examined the effects women in power had on girls' attitudes towards achievement.

Duflo's research was focused in the Indian state of West Bengal, in which a quota system has been in place since 1993 to boost the number of women in local government. When young women aged 11 to 15 in West Bengal were surveyed and their responses compared to those of women who grew up in areas without any female leadership in their societies, the differences were incredible.

In West Bengal, the gender gap was effectively non-existent. There was no difference in expectation among parents about their sons' and daughters' education, and young women themselves were "25 percent more likely to expect to achieve the same level of educational as their male peers." On the other hand, in villages were there were no female politicians or women in positions of power, "parents were 45 percent less likely to expect their daughters to continue beyond secondary school" and girls were "32 percent less likely to have those aspirations."

Duflo said of these findings,

We think this is due to a role-model effect: Seeing women in charge persuaded parents and teens that women can run things, and increased their ambitions. Changing perceptions and giving hope can have an impact on reality.

Now, the same line of reasoning can be applied to minority students in America and the effects of minority teachers on their achievement. The lack of minorities in education perpetuates a vicious cycle — the lack of minority educators is often linked to a lower graduation rate, which in turn means that fewer minorities will be in a position to serve as the next generation's teachers. And this presents an enormous problem for the state of education as a whole in the United States.

According to Secretary of Education Arne Duncan, "Hispanic men make up only 3.5 percent of the nation's teachers." About 8 percent of teachers are black. And in some school districts, the disparity between teacher and student racial and ethnic makeup is becoming painfully obvious — in Milwaukee, about 75 percent of the students are minority and 75 percent of the teachers white. In fact, according to the 2008 Schools and Staffing Survey "more than 20 states have gaps of 25 percentage points or more between the diversity of their teachers and students," which means that the percentage of minority students exceeds the percentage of minority teachers by more than 25 points.

In light of Katherine Milkman of the Wharton School's new study about professor response rates to students that found that white men received answers 25 percent more frequently than women or minorities, perhaps it is time to take a look at the racial and ethnic composition of the teachers of America, and make sure that they reflect the growing diversity of the country at large.