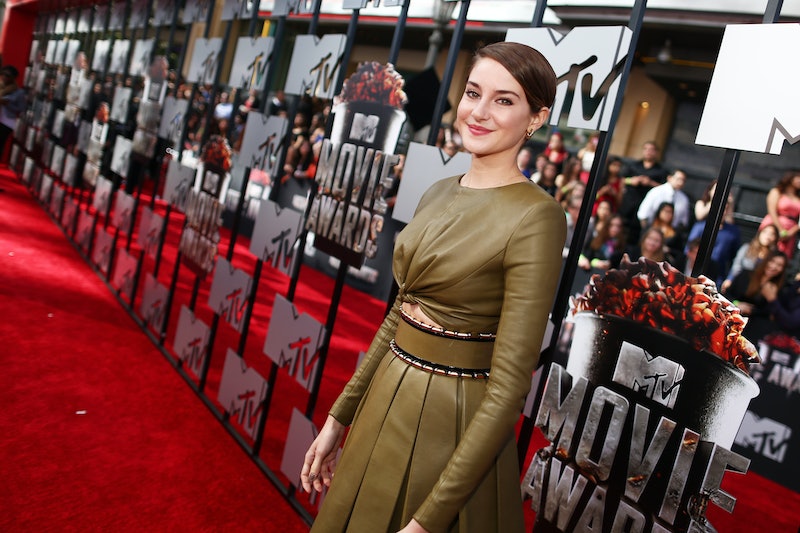 Oh Shailene. Shailene, Shailene, Shailene. Shaliene Woodley, why don't you understand feminism? I'm sorry to say, but you've got it all wrong. I have a lot of respect for you, you emphatic and spritely woodland creature, you. You're proud of who you are and demand respect for those tenets in your life to which you hold dear, which makes you a gangbuster role model for young women-to-be out there in the world. You're unabashedly strong-willed-and-minded in addition to refusing to fit into pre-determined societal roles. You are — essentially — a feminist! So, uh, why are you saying you aren't one? Oh, right — because you've got yourself totally screwed up on that definition front. So I'm here to set you straight.

In a recent interview with Time Magazine, when asked point-blank if you were a feminist, you replied:

No because I love men, and I think the idea of "raise women to power, take the men away from the power" is never going to work out because you need balance.

Which is just so egregiously ill-informed that it's got me pretty pissed off. I don't know who's been teaching you Feminism 101, but actively removing men from power because apparently there can only be so many people with it, is 1,000 percent NOT what being a feminist is about. And we'd hate for you to sound so ill-informed on a topic as important but oft-misunderstood as this.

As Marie Shear so perfectly put it in 1986, "feminism is the radical notion that women are people." Because women — in addition to anyone that isn't, essentially, a straight, white man — have long been considered less-than, or unequal in terms of their minds and abilities. Look back at history and what has been written about the so-called "fairer sex." Read Amy Schumer's speech from this weekend. Pick up any magazine and compare what and how men are written about and photographed compared to the women. Feminism is about removing a stigma that's so deeply entrenched in our culture as "the way it is" that some people feel that demanding even just this simple equality, is a personal attack on men. It's not!

The only basis for such an argument comes from the simple coincidence that, oh look, men have been the ones wielding and writing the cultural power dynamics for years. And — what a thought! — ladies would like to have a say on how and why they're represented because, y'know, they know what it's like to be a lady. And because ladies deserve to start on the same rung of the ladder as the dudes.

It is, like you said, about balance. It's about truly finding equality for all. There is nothing about feminism or the ideals behind it that even point to there being some sort of need for men to lose power in order for women to have it. You know who says stuff like that? Scared people. Fighting — in-fighting or otherwise — is the problem. Feminism is about empowering women to self-actualize as much as men are already allowed to do. It's about giving ladies the freedom of choice: something they've long been disallowed. It's about removing these engendered biases and looking at everyone — men, women, transgender, cisgender, etc., etc., — as people and humans first rather than what parts they may or may not have in between their legs.

Feminism hopes to give everyone — literally everyone — a world wherein respect for their personhood is afforded without question. Your definition of "sisterhood" is actually exactly what feminism is! Because, as you note:

We don't even seem to respect each other. There’s so much jealousy, so much comparison and envy.

Know what fosters that? Ill-informed opinions that eschew the real goal of feminism and a history of such thought. All feminism aims to do is to rid the world of this idea that women are anything other than humans first and therefore unfitting to be given the same footing in life as the men.

This really shouldn't be all that radical a notion. And given the other things you said in the article, we feel like you'd agree with us. Are you free to not be a feminist, Shailene Woodley? Of course: that is your right as a woman. And you're growing up in a time that's super exciting and boundary-pushing for women, so you probably don't have the same point of view as many of the feminists that have come before you.

But you should at least know what you're actually talking about before you make that decision. Feminism is at once universal and personal — it's about equality for all through the bolstering of confidence and vocality on all fronts. And it is NOT about bullying the men. Because, spoiler alert: I'm a feminist — a big one — and I love the shit out of men. Lots of feminists do. So next time, don't be so pithy and derivative about something that's actually wildly important, is all. Thanks in advance.

More like this
Sandra Bullock, Girlboss Extraordinaire
By Matt Harkins & Viviana Olen
The 'Hocus Pocus' Sequel Finally Has A Release Date & It Makes Total Sense
By Shannon Barbour and Radhika Menon
Spice Girls’ Net Worth: The Richest Member Is Wealthier Than The Rest Combined
By Hugh McIntyre
Watch Pete Davidson Joke About The “Really Weird” Kanye West Drama On Stage
By Brad Witter
Get Even More From Bustle — Sign Up For The Newsletter