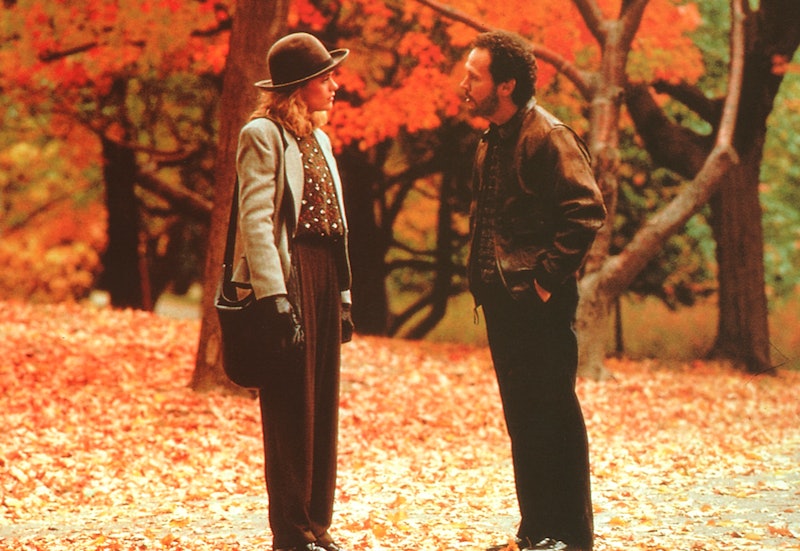 Mindy Kaling is a big public advocate of the romantic comedy. She talks about it at length in her book, and her show is built around the tenets of the genre. It's kind of perfect, then, that Kaling sat down with Billy Crystal recently and the two talked at length about When Harry Met Sally. And the stories Crystal has to tell about his natural chemistry with Meg Ryan? Well, they're magic.

The chemistry was present from the very beginning, apparently — a factor which certainly led to the easy interaction in those first road trip scenes of the iconic film:

Well, we were casting the movie, I was cast before she was. So many terrific actresses came in — all really, to this day, very strong, terrific, present talents and very well known, all of whom we had a good thing. It was always, “Well, she could do it. She could do it. She’d be great. She’d be great.” And then Meg came in and we didn’t even read a scene, and we all knew it was her. It’s just one of those indefinable things that when we started talking we were them already, you know? And what was really interesting was Meg had auditioned for Throw Momma From the Train (1987), which was the movie I did before Harry and Sally, to play my girlfriend, and the same thing happened. It was right after she was in Top Gun, and she was so great in Top Gun. And she came in and Danny DeVito was directing the movie, and I said, “Well, God, it’s so natural.” And I said, “What was that? We weren’t even trying and it was just great.” And he didn’t cast her because he felt for that character he wanted that she was a tad young. And I’ve always wondered if Danny had cast her and she had played my girlfriend, would Rob [Reiner] have said, “Well, I just saw you do that. I want something fresh.” I don’t know. But the mystery of Meg and I was just — there was no mystery. We just hit it off.[...] It’s like a love at first sight.

And 25 years later — when Crystal and Ryan reunited to honor Rob Reiner —the pull was just as strong. After all, that chemistry is hard to beat:

We’ve rarely seen each other over time — once in a while, you know how that is. So, when Rob was being honored, we got in touch and we started e-mailing, and we talked on the phone a couple of times, [talking about] what we might want to say and what to stay away from and so on and so forth. Then she came over and we spent an hour together on Sunday, the day before the event, and it was like it had never stopped. We both went, “Isn’t this something?” We just fell into each other all over again.[...] My Burns and her Gracie, you know, it really was that all over again. It was just, I hate this word, but it was delicious.

And everything just got more epic at the Reiner event as they watched the When Harry Met Sally scene play out:

And we just looked at each other and just smiled and hugged each other. It was, like, perfect. It was really perfect. So, it’s that undefinable kind of thing that you call “chemistry” that I call…it’s like a magic that happens. It’s kismet. It’s meant to be. And you don’t have that with a lot of people.

So if you were wondering if Crystal and Ryan are just as infuriatingly perfect together onscreen as they are on, the answer would be yes. And it's just as fun to watch now as it was 25 years ago.

You can read the full interview — which includes talk of Crystal's new show and additional anecdotes — over at Entertainment Weekly .