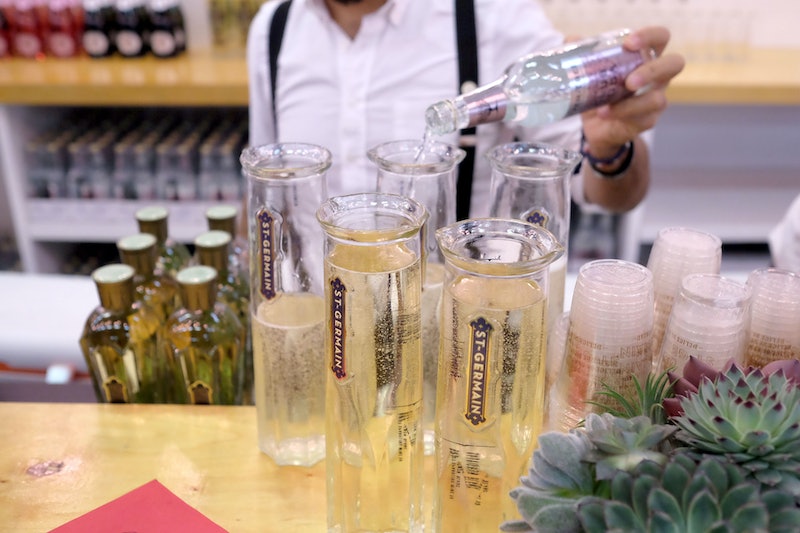 You've heard the sayings. Beer before liquor, never been sicker; Grape or grain, but never the twain...Good news though — you don’t actually have to worry about these or any of the other odd phrases floating around about mixing your booze. Mixing types of alcohol doesn’t actually cause hangovers, according to the BBC. Cocktail enthusiasts of the world, rejoice!

In her recent investigation of whether any of those old sayings have any truth to them, journalist Claudia Hammond unearthed a whole bunch of studies that show what makes us sick isn’t the mixing of alcohol; it’s how much alcohol we drink, plain and simple. “The higher the alcohol content of any given drink, and the faster you drink it,” writes Hammond, “the worse the hangover.” But, given that not all drinks are created equal — a shot of tequila goes down a lot faster than a pint of beer, even though both have roughly the same alcohol content — it’s possible that consuming a variety of different drinks may result in consuming more booze overall. It’s also worth noting that darker drinks have more “congeners”— substance produced during fermentation, like tannins — which are also a trigger for intoxication; so, bourbon might make you drunker faster than clear liquors like vodka, due to the fact that it has a whopping 37 more congeners. This, then, is likely what makes a hangover from mixing drinks worse than one caused by drinking a whole bunch of red wine: As The Date Report put it, “it’s the quantity that’s the culprit, not the order.”

But say you read this whole thing about how mixing types of booze doesn’t, in and of itself, cause sickness and you go out tonight consuming cocktails with abandon. Your subsequent hangover may not be a result of having mixed drinks the night before — but you drank too much, so you’ve still got one, and it still sucks. What can you do about it? Unfortunately a 2005 study that examined the efficacy of every hangover remedy from multivitamins to chasers found that pretty much none of them work. However, even if there are no instant hangover cures, you can at least give your body a little TLC to help get it back on track: Rehydrate by drinking plenty of water (or even better, coconut water), eat an avocado, and try some ginger or peppermint tea for your headache and nausea.

And also, y’know… maybe don’t drink so much next time. “An ounce of prevention is worth a pound of cure” is one saying that might still apply.