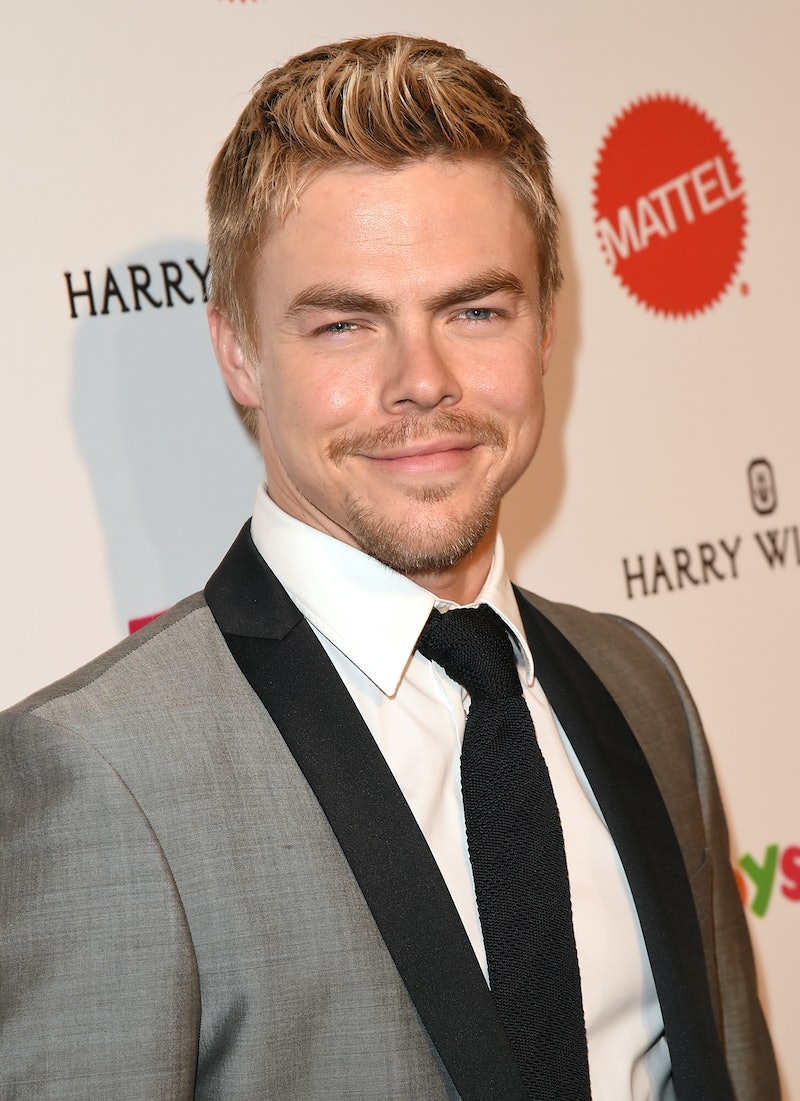 Derek Hough is at it again. Dating that is. The Dancing with the Stars member was spotted with actress Nikki Reed while on an apparent double date with sister Julianne Hough and her man Brooks Laich. The elder Hough has been linked to a lot of ladies in his time, probably why poor Reed is being labeled as just a "new hookup" in Us Weekly's words. Is Hough actually a player? His history will say yes, but only if you believe that being photographed together constitutes a relationship.

Hough's longest relationship was the one he had with this Jane by Design actress. But after eight years together he reportedly broke up with her to start dating his DWTS season six partner Shannon Elizabeth.

Though the couple shot down rumors that they dated while on the show, she eventually confessed in 2009 that they had indeed been dating and announced their breakup on Twitter.

It's likely Elizabeth's fault that he would be linked with nearly every partner after her. Once people knew he was capable of dating someone and lying about it, it was easy to assume he'd doing the same with all his dancing partners. But Hough's not mad. He's still friends with Elizabeth and the pair caught up over dinner in 2012.

Hough's season nine partner Krupa was also linked to Hough on reality TV blogs across the Internet, but nothing ever came of the rumors.

Rumors circulated that the pair were dating behind the scenes of DWTS season 10, but things really picked up when they were spotted in a car together in June 2012. (Like I said, photo together = dating in tabloid world).

When Hough first met the British musician in 2010 he hadn't actually heard any of her songs. He was originally hired to help choreograph her music video and admitted he had to Google her to learn who she was. He and Cole remained friends after their split, which is why he doesn't usually discuss their relationship with the media. "I think often in this culture people take advantage of their friendships. I've never spoken about her because her friendship is important to me," he told the Daily Mail last year. Here's their performance of Cole's song "Parachute."

The USC student was dumped days before the big dance and emailed Ryan Seacrest asking him to help her get revenge on her ex. So Seacrest set her up on a fake date with Derek Hough! After the date, Jones interviewed the DWTS cast and got into a faux jealousy fight with Hough's dancing partner at the time, Maria Menounos. Check out the clip below two minutes in:

Matchmaker Ryan Seacrest was at in again when he was helping Chenoweth pick new guys to date and listed Derek Hough as an option. Chenoweth agreed calling Hough “Dreamy McDreamerson" and saying, “I wouldn’t dump him out of bed for eating crackers, I’m not gonna lie.” The pair never actually dated, but that would have been a pretty fun relationship.

Menounos was Hough's season 14 DTWS partner in 2012 and after kissing her twice during the competition (as part of the dances) rumors flew that Hough was secretly dating the actress. These rumors picked up speed again in October 2013 when Hough hung out with her shortly after breaking things off with Nina Dobrev. But Hough maintains that the pair are just friends. (Plus Menounos has a boyfriend!)

This famous pair only dated for six weeks after being set up by Derek's sister Julianne, who is BFFs with Dobrev. That begs the question, who did Julianne side with after the split? Both! She remained close with her brother (obvs) and Dobrev despite the couple's breakup. Apparently it wasn't a big deal since the pair was "just having fun" and their dating was "nothing serious" according to a source. They even spent Christmas together at the Hough household.

Actress Reed is the latest to be linked with Hough, following a split from her husband earlier this month. But despite reports of PDA between her and Hough, a source insists the two are just friends. "Nikki isn't currently dating anyone," the insider revealed. "She is focused on her divorce from Paul and caring for that relationship as well as her latest film projects. Nikki and Julianne are good friends, and she has hung out with Derek a few times through her. They're having fun but it's nothing serious."

I can totally buy the "just friends" story because Hough seems to be friends with everyone including all his exes. I think Derek Hough is just a friendly guy which is of course going to land him with a million dating rumors. But that's been happening for years and it doesn't seem to phase him, so good for you, Derek! You just live your life!