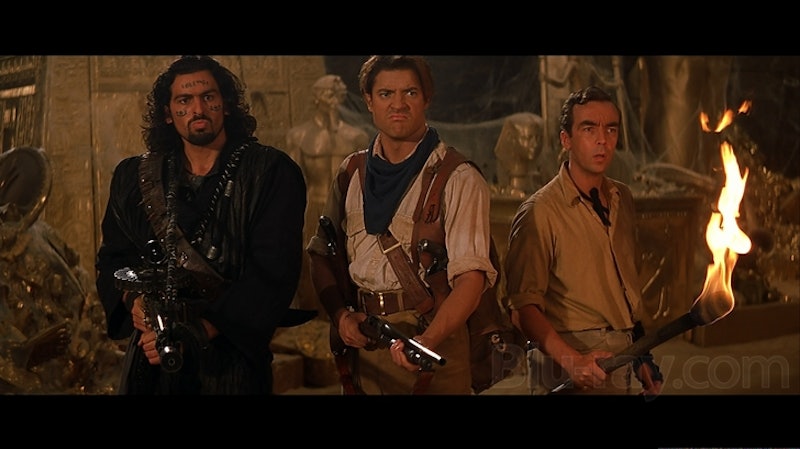 May 7 marks the 15th anniversary of The Mummy, the 1999 remake of the classic 1932 moving picture. It is the first installment of The Mummy movie trilogy, and it is Brendan Fraser at his delightfully hammy best (augh, I miss the late ‘90s/early ’00s Fraser-palooza). Quick Mummy refresher: Adventurer Rick O'Connell (Fraser) and his band of buddies go on an expedition, find Hamunaptra ("The City of the Dead"), and manage to wake up the very ornery Imhotep (Arnold Vosloo) along the way. Even when faced with scarab beetle attacks and the undead assembling, the characters still find the time to toss around corny jokes. Scare-larity ensues.

How much do I love this spooky adventure romp? I'll put it to you this way: There was a point in my life when I could quote it verbatim. It burrowed into my brain like a flesh-tunneling scarab beetle and stayed put. But this does not bring me shame, for The Mummy is terrific. It is a decade and a half old, but the jokes hold up. The special effects ain't half bad, either. Do you know what else holds up? The life lessons.

Though it is a a supernatural movie set in 1920s Egypt, its lessons are timeless. You can—and should—apply the following pearls of wisdom from The Mummy to your everyday life:

1. Look for the silver lining

2. Always remember who is in your corner

3. Don't judge anyone's dreams, no matter how strange they may be

EVELYN: I've dreamt about this since I was a little girl.RICK: You dream about dead guys?

EVELYN: Look, I may not be an explorer, or an adventurer, or a treasure-seeker, or a gunfighter, Mr. O'Connell, but I am proud of what I am.RICK: And what is that?EVELYN: I am a librarian.

RICK: Well if it ain't my little buddy Beni. I think I'll kill you.BENI: Think of my children.RICK: You don't have any childrenBENI: Someday I might.

8. Treat every pitch black room as though it is full of treasure

9. Be cool with going with the flow

EVELYN: Patience is a virtue.RICK: Not right now it isn't.

10. You may find love when you least expect it

11. Have a music player on hand for any and every occasion

13. Always keep a cat around