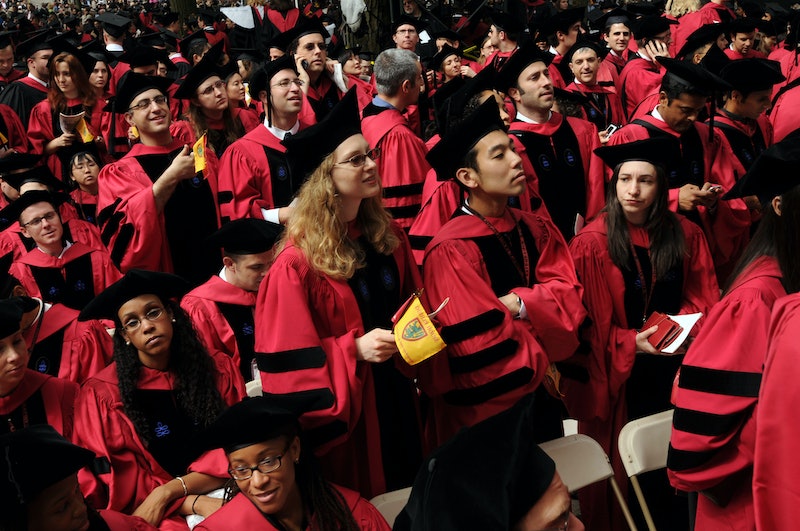 It may seem like students graduating from elite colleges automatically have picture-perfect lives in store for them. But, while money can buy you an education, it apparently cannot buy you happiness. A new nationwide survey of college graduates of all ages shows that people who went to elite colleges actually aren't highly likely to feel engaged at work, and the vast majority aren't thriving in all of the other domains of their lives (physical, financial, community, purpose, social), either.

The Gallup poll of over 30,000 college graduates in all 50 states is intended to provide a clearer and more holistic picture of college's value, other than the overly simplistic figures often cited regarding graduates' incomes. Here are some highlights of the results:

Just 39% of college graduates feel engaged at work—meaning, for instance, that they enjoyed what they did on a daily basis and are emotionally and intellectually connected to their jobs. And only 11% reported they were "thriving" in five different aspects of their lives, among which are financial stability, a strong social network and a sense of purpose.

That relatively small handful of graduates—who tend to be more productive—went to a variety of colleges, though they were slightly more likely to go to larger schools and less likely to have attended for-profits.

In other words, even of people who graduated from college, most aren't leading optimal lives. And those who are leading great lives happened to get their educations from all different kinds of institutions — not just the Ivy League. If not prestige of pedigree, what does correlate with life satisfaction in college grads? It's the quality of relationships that students were able to find with professors and mentors there:

The strongest correlation for well-being emerged from a series of questions delving into whether graduates felt "emotionally supported" at school by a professor or mentor. Those who did were three times as likely to report they thrived as adults. Graduates who reported having "experiential and deep learning" were twice as likely to be engaged at work as those who didn't.

You can make friends with peers anywhere, in college or not, but college provides a unique opportunity to learn from successful adults who are further along in life than you. So if you know anyone who's choosing a college, encourage him or her to investigate what kinds of opportunities for mentorship and extracurricular activities are available at each one instead of just being impressed by a "name brand" school.

In light of other studies, though, this finding about colleges and happiness shouldn't be terribly surprising. On their deathbeds, people tend to report that they wish they had spent less time working and more time keeping in touch with friends. Meaningful work is valuable, but humans are social, and we ignore our needs for friends, family, and community at our peril. So network your butt off and enjoy that commencement speech for what it's worth, but remember that you're more than just your alma mater.