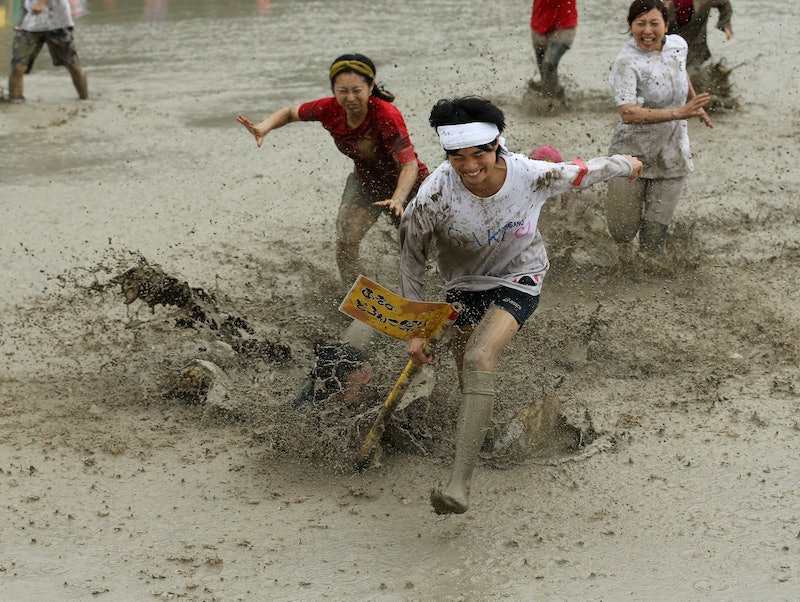 Just in case you haven’t already filled your daily quota of “OMGWTFBBQ,” here you go (although it is not recommended that you read this story either directly before or immediately after eating): The side effects of competing in obstacle races like Tough Mudder, Warrior Dash, Spartan Race, or other such events allegedly may include fever, vomiting, and bloody diarrhea. Why? Because the mud you encounter during them could be contaminated by animal feces. Fun times!

The CDC’s Morbidity and Mortality Weekly Report from last Thursday stated that they had finally found the cause of illness for 22 people who got sick after participating in a Nevada Tough Mudder event in 2012. The event was held on a cattle ranch, and the campylobacter coli bacteria the participants contracted was almost certainly the result of swallowing muddy water. Campylobacter coli, which bestows upon its sufferers a week of diarrhea, cramping, abdominal pain, and fever, is normally seen in humans as a result of consuming raw or undercooked poultry; however, it’s also present in cow and pig manure, so it’s likely that the muddy water swallowed by the racers was laced with some kind of excrement.

Do you think anyone warned Kim and Khloe Kardashian about this before they tackled that mud run last month?

Adventure and obstacle racing have been steadily growing in popularity in recent years, and I know they can be really fun and act as fundraisers for important causes. But I can’t help but think that maybe this little tidbit might dampen the enthusiasm about them just a tiny bit. And, campylobacter coli may be the least of your worries. The Blaze notes that the four-pages-in-tiny-print waiver you have to sign before participating in a Tough Mudder race contains the following paragraph (emphasize is The Blaze's):

"I further understand and acknowledge that any of these risks and others, not specifically named, may cause injury or injuries that may be [categorized] as minor, serious, or catastrophic. Minor injuries are common and include, but are not limited to: scrapes, bruises, sprains, nausea, and cuts. Serious injuries are less common, but do sometimes occur. They include, but are not limited to: property loss or damage, broken bones, fractures, torn or strained ligaments and tendons, concussions, exposure, dehydration, heat exhaustion and other heat-related illnesses, mental stress or exhaustion, infection, vomiting, dislocations, hyperthermia, hypothermia, anemia, electrolyte imbalance, loss of consciousness, syncope, dizziness, fainting, seizures, electric shock and/or injury, and neurological disorders/pain. Catastrophic injuries are rare; however, we feel that our participants should be aware of the possibility. These injuries can include but are not limited to, permanent disabilities, stroke, single or multiple organ failure or dysfunction, physical damage to organs, spinal injuries, paralysis, heart attack, heart failure, blood cell disorder, brain swelling, and even death."

I don’t have enough stamina for these kind of races, so I’ve never done one; however, this waiver in combination with the possibility of coming in close contact with animal feces has convinced me never, ever to participate in one. Death? Death?! Maybe I’m overreacting, but I would rather not die while trying to haul my out-of-shape butt over an eight-foot plywood wall with a giant mud pit on the other side.

More like this
6 Abortion Advocates To Follow On TikTok
By Sara Youngblood Gregory
The 11 Best Sheets For Night Sweats
By Megan Gray
The 5 Best Probiotics For Bloating
By Margeaux Baulch Klein
Tapping Mind/Body Power: Evia Brings Digital Hypnotherapy To Menopause
By Cassandra Seale
Get Even More From Bustle — Sign Up For The Newsletter