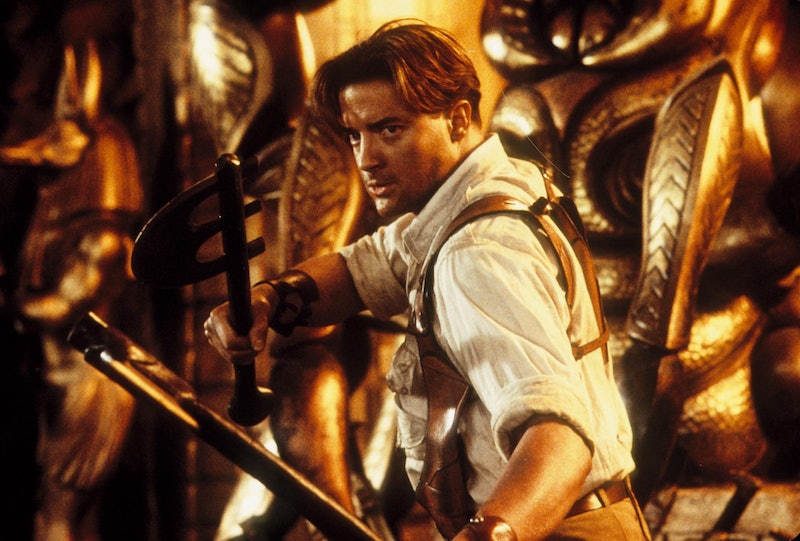 The Mummy turns 15 on May 7, which makes me feel insanely old. I was obsessed with these Indiana-Jones-meets-horror films when I was a kid, and apparently, I wasn't alone. The Mummy had two sequels and a spin-off franchise (The Scorpion King films, starring Dwayne "The Rock" Johnson, because of course it was Dwayne "The Rock" Johnson) not to mention its very own theme park ride at Universal Studios. And while the films still deliver, Universal is considering rebooting the franchise once again. Because, again: who doesn't love The Mummy?

Of course, The Mummy franchise would be nothing without its hero, Rick O'Connell, played by the world's most underrated actor Brendan Fraser. Rick was strapping, heroic, and was able to keep his hair looking fantastic despite the arid climate of the Egyptian desert. This guy knew how to slay the undead, rescue his girl (not that she wasn't highly capable of saving herself most of the time), and churn out snappy one-liners in the middle of it all. Rick was the only hero I could ever have imagined in The Mummy movies, and I have Fraser to thank for bringing him to life.

How do I know Fraser is a great actor? For one thing, he's an expert at acting without ever actually saying anything. This guy is the king at emoting via raised eyebrow and upturned lip.

Here his look is saying, "I'm frightened, but also, protective."

This here is just general doofiness.

The word "bewildered" comes to mind.

This is Fraser's "pensive face."

And here, he does! (But is somewhat sad about it.)

But in this one, Fraser is totally NOT here to make friends.

He's way too cool for school.

Confused, but there's a longing here.