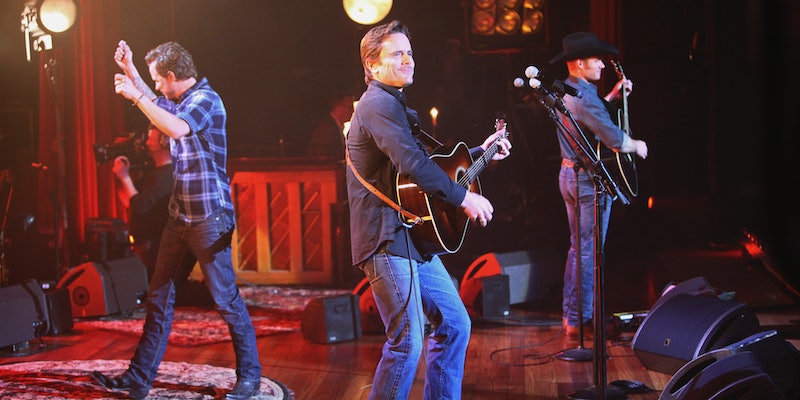 Nobody should be forced to think too much about Nashville. Really, there’s not much to think about, is there? Cardboard characters making cardboard decisions against a backdrop of (slightly less) cardboard music, none of which has ever once amounted to a moment that was even slightly shocking. Every scene of this show plays out in exactly the way you’d expect it to, which makes slogging through each episode sort of like going to bed with a white noise machine plugged in next to you. Predictable. Tiring. I’ve watched entire episodes without taking a single note, because not a single interesting thing had really happened.

“LUKE WAS INJURED IN AFGHANISTAN” I wrote at the top of my notes for Wednesday’s episode, in the hopes that all-caps would somehow inspire me toward a prolonged state of enthusiasm (and/or result in the end of Luke Wheeler’s time on the show, which now will have to happen next week). It didn’t! You can’t trick your brain into finding something interesting that is consistently anything but.

Sample plots from Nashville’s latest attempt to put me in a coma:

When I write them down none of those plots sound that bad, but then bad isn't the point -- it's boring. And being a soap opera, Nashville's prime directive -- one of the only things it has to do -- is to neutralize boredom. Send your characters into frenzied mania, have them kill someone, do whatever. But don't be boring. Don't do it, Nashville!

Next week something will happen, because it's the season finale and if nothing happened on the season finale than not only could we say that you were in a coma, but the show as well. But that's such a low bar, Nashville. Your sister show, Scandal, regularly and crazily DOES STUFF that you're too chickenshit to even consider. And in typing this, I don't mean to suggest that you need to hit that mark. You only need to try and you'll have already done more to save your show than the entire last two seasons combined.