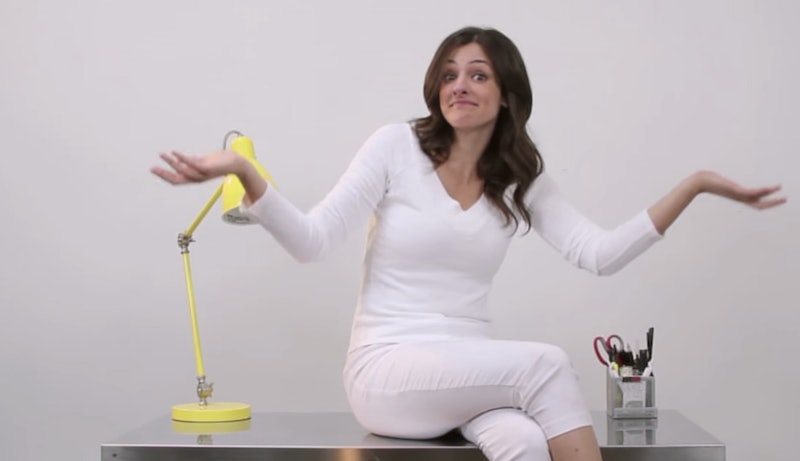 Has it ever struck anyone else as odd that sanitary pad commercials always use that weird blue liquid when demonstrating the efficacy of the product? We’re all well aware of the fact that periods involve blood, and that blood is generally, y’know, red — so why the switch-up? The hilarious folks of UCB Comedy were also curious about it, so they took matters into their own hands. If you’ve ever wondered what a true-to-life sanitary pad commercial would look like… well, now we know.

True, UCB took it to the extreme (consider yourself warned if you choose to watch the video below, especially if you’re at work), but let’s face it: We bleed when we're enstruating, and we don’t bleed watery, blue, alien blood. Nor, as The Atlantic points out, is color the only menstrual taboo in advertising; apparently in 2010, Kotex was told they couldn’t use the word “vagina” in their ads by three different broadcast networks. They couldn’t use the term “down there,” either, which, frankly, doesn’t leave you with a whole lot of options unless you start getting really creative (and I don't know about you, but I kind of hate the term "hoo-ha").

And as outrageous as the UCB parody is, I can’t help but be troubled by this weird preoccupation with divorcing the purpose of fem-care products from their ads in the name of “good taste” or what have you. Said Elissa Stein, co-author of the book Flow: The Cultural Store of Menstruation to the New York Times in 2010, “Fem-care advertising is so sterilized and so removed from what a period is. You never see a bathroom, you never see a woman using a product. They never show someone having cramps or her face breaking out or tearful — it’s always happy, playful, sporty women.” True that. I also know an unfortunate number of adults who are uncomfortable with the word “vagina” — something which I’m sure isn't helped by the fact that ads for products intended for use in and around the vagina are dancing around the term.

But hey, at least we’ll always have this video, right?