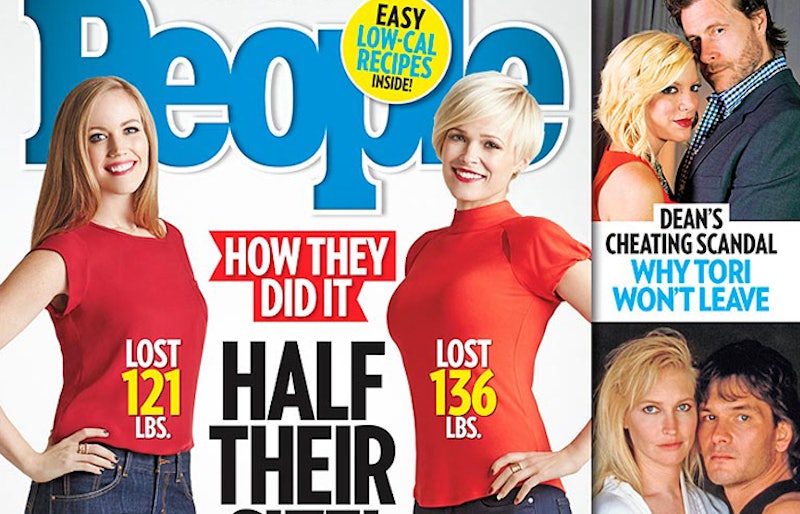 You may have heard about the recent controversy surrounding blogger Brooke Birmingham and Shape magazine. The publication (though they deny having nefarious intentions) declined to publish her weight loss "after" photo, likely because it showcased the loose skin on her abdomen. This prompted Birmingham to take to her blog to lambast the magazine for refusing to celebrate healthy bodies unless they look a very specific way, in the process highlighting one of the many problems with media accounts of drastic weight loss.

When a celebrity or someone in the media loses a significant amount of weight, you can almost guarantee that it will make headlines. Al Roker, Jonah Hill, Oprah, Jessica Simpson, Jennifer Hudson, Chris Christie, and a laundry list of other celebrities and political figures have had the size of their bodies feature as the topic of discussion at one point or another in the media cycle. But celebrities aren’t the only ones who get this treatment. Women’s magazines, especially those that devote a significant amount of space to weight loss “tips and tricks,” are filled with photos of people who have lost a lot of weight. Their stories are almost always accompanied by “before and after” pictures of their formerly-fat bodies and currently svelte selves.

These photos are intended to help fat people believe that losing a lot of weight is possible. That even if they’ve struggled to lose weight with dieting and exercise, someone else has done it, and that means they can too. But it's problematic that most of these photos don't tell the real story of what extreme weight loss actually looks like. Birmingham tried to help people understand the effects of significant weight loss — the photo that didn't meet Shape’s standards for a perfect post-weight loss body shows Birmingham looking awesome, strong, and proud in a bikini, unabashedly showcasing the loose skin around her midsection. Because when a body has lost that much weight, it likely looks nothing like the tight-bodied women in Shape. Things sag in brand new places, there’s loose skin – sometimes a lot of it. A friend who had weight loss surgery told me that she felt like she was living in a completely different body after the procedure, one she didn’t know and didn’t particularly like. Magazines like Shape continue to pretend that if fat people would just work a little harder, just eat a little more kale, then they could finally attain a body that looks like one of their cover models, but that is not true. Losing that amount of weight is likely a disorienting experience, and people attempting such a transformation would benefit from a truthful depiction of what that transition could look like.

And these misleading photos and the "before" shots they are paired with also serve as a reminder to fat people that their bodies are undesirable, and that they should be doing everything they can to change them. Losing weight is always seen as preferable to being fat. Birmingham did the work to become thin, which is something that society compels fat people to do, and still couldn’t be a success story. But what about those of us that don’t have any desire to become thin, or realize that we never will?

I wrote on Wednesday that Shape would never have published a photo of my fat body, but that actually isn’t true. They would totally publish my photo, so long as I went out and lost a bunch of weight for their “after” photo. These kinds of representations of fat people in women’s media will always devalue fat bodies, especially if they are positioned as something to fix. These photos will always reinforce the superiority of thinness, no matter the cost.

Maybe it’s time we just nixed the idea of “before and after” photos altogether. More power to anyone who wants to lose weight, but they shouldn’t use their former body, which looks a lot like mine, as a way to convince other women to go lose weight. Women deserve to know that their bodies are valuable whether or not they are thin.

More like this
Wimbledon Alters All-White Kit Rule Amid Candid Period Discussions
By Catharina Cheung and Rachel Mantock
The 5 Best Pillows For Acid Reflux, According To A Sleep Expert
By Maria Cassano
Here's How To Support Jewish People Amid Rising Antisemitism
By Hannah Orenstein
7 Dos & Don'ts To Follow For The December 2022 Full Moon
By Brittany Beringer
Get Even More From Bustle — Sign Up For The Newsletter