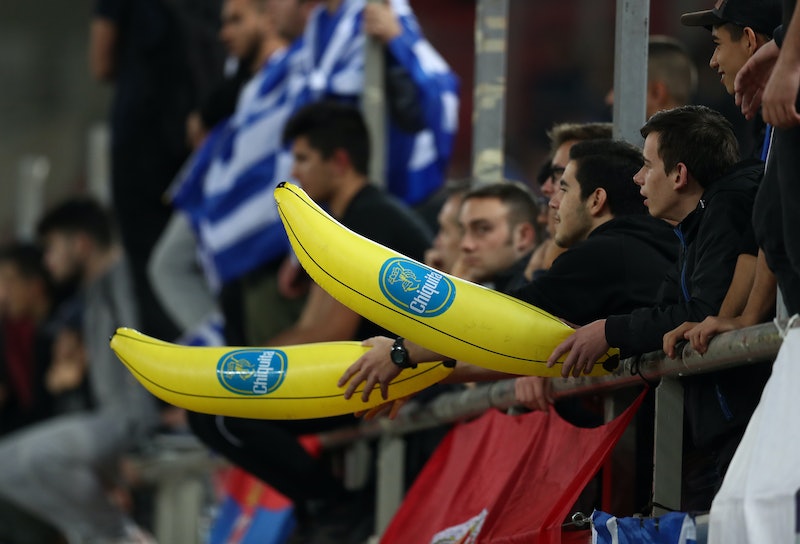 You guys all probably know by now how much I love a good infographic. But this one? It might just be the best yet. In case you’ve been desperately wondering which country has the biggest penises (who among us hasn't googled that when planning a trip overseas amirite??) British tabloid The Sun has a handy guide for you. Average penis size can apparently be anywhere between 3.7 inches (Korea) and 7.1 inches (the Congo), with the U.S. falling right in the middle at 5.1 inches. Huh. Good to know.

However, if you made note of the fact that this infographic came from The Sun, you might be thinking, “Um… can we really trust this thing, given its rather questionable source?” And you’d be absolutely right to want to take it with an extremely large grain of salt. According to BuzzFeed, the data used in the infographic’s creation appears to be drawn from a 2012 study conducted by Dr. Richard Lynn of Ulster University — which, unfortunately, was heavily criticized due to its “race realism” agenda.

As stated by Scott A. McGreal in Psychology Today, “Advocates of race realism argue that there are real and pervasive differences between racial groups in personality, intelligence, and social behavior, that these differences have a genetic and evolutionary origin, and that they can explain disparities in important social and economic outcomes between the races.” So, basically, it’s “scientifically justified” racism. Yikes. As such, McGreal continued, “Lynn’s theories about race rest on shaky foundations and the data sources he uses as evidence for his claims about penis sizes are untrustworthy. For these reasons, his claims should be disregarded as unscientific.”

And, as Design Taxi notes, does size really matter? After all, P-in-V is only a small part of all the fun you can have in the bedroom (or in the shower, or on the kitchen table, or…). Let's not forget that old saying about the motion of the ocean. Especially if you find yourself in Korea.

More like this
Anguilla Is The Under-The-Radar Caribbean Destination You Need To Visit
By Rachel Lapidos
Iran Has Issued A Death Sentence Over Mahsa Amini Protests
By Catharina Cheung, Darshita Goyal and Maxine Harrison
How To Switch Back To A Personal Instagram Account From A Professional One
By Alexis Morillo
The Best Self-Care Strategy For Your Zodiac Sign
By Marilyn La Jeunesse
Get Even More From Bustle — Sign Up For The Newsletter