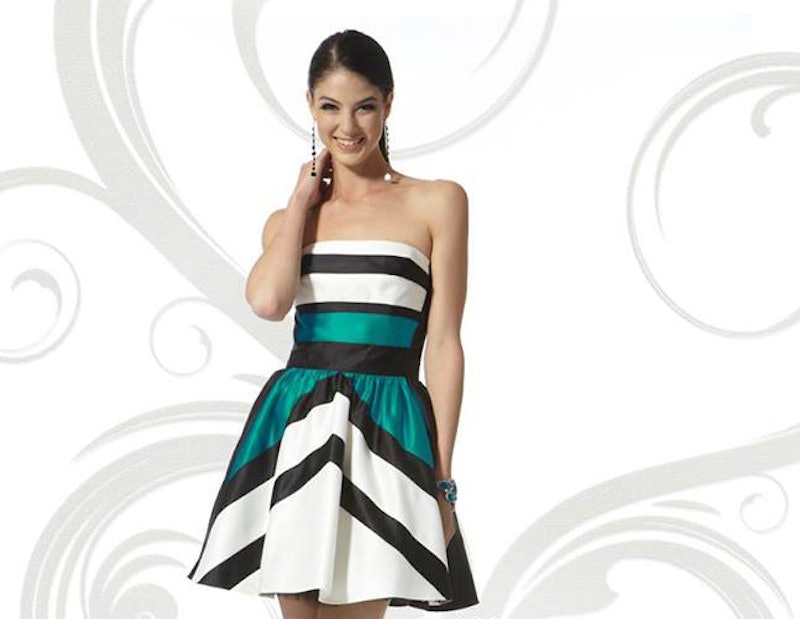 Ten years ago, she was as essential to every girl's prom experience as corsages and some form of humiliation. (Your dancing, your date's dancing, your parent-acting-as-chaperone's dancing… ) But after spending over 40 years designing tasteful satin, silk, and tulle gowns for teens and beyond, the 83-year-old Jessica McClintock has retired, according to multiple sources. The designer will no longer be manufacturing special occasion garments, and will shift her focus to licensing.

It comes as a bit of a surprise for anyone who saw the designer as an institution during prom season — not to mention for anyone eager to pick up a Jessica McClintock gown during 2014's prom season. The designer opted to retire quietly. No press release was disseminated to media; no mention that Jessica McClintock would no longer be manufacturing gowns was made anywhere. Instead, all of the designer's boutiques and outlets were closed by November 2013, after which her new special occasion garments were gradually removed from department stores, and her website was completely shut down.

Just three years ago, it didn't seem Jessica McClintock would head in this direction, even after her brand began to be overshadowed by flashier special occasion companies like Sherri Hill and BCBG. After all, the designer herself told San Francisco's SFGate that she'd never stop working.

Young people know my name ... Their parents know my name. It keeps me challenged all the time. I go to sleep thinking about fashion and design. I never, ever stop.

But according to Erena Shklovsky, Jessica McClintock Inc.'s Divisional Designer, who worked with McClintock for 28 years, the company halted production on garments in March 2013 after McClintock decided to retire. But why did the ambitious business woman, who was responsible for generations of customers' vivid and fond teenage memories, reverse her stance on retirement?

It seems it was as much a business decision as a decision to relax after 45 years of hard work. Despite Jessica McClintock Inc.'s success in the decades after the designer started her business at age 38 (at its height, Jessica McClintock had 41 stores, according to Shklovsky, and a reported $100 million in annual sales), the label was rocked by the 2008 recession, says Shklovsky. Retail at department stores and malls — where most of McClintock's inventory was sold — suffered, causing the company to be "hit from every corner," Shklovsky says. "Of course the problem was that she was in special occasion dresses. And when people are in a recession, who's going to go out and buy an extra special occasion dress? They will rummage through their closet, and they will find something that they already have."

From there, things only got more challenging for McClintock, and, eventually, the financial drain became, well, simply too draining. "The [manufacturing] business had become not fun anymore," Shklovsky says. "It became very challenging ... and it was very difficult to make a profit."

Especially considering the designer's commitment to manufacturing affordable special occasion wear. McClintock was a rare designer in the special occasion industry — for teens, her garments screamed glamour and elegance, and, for parents, her garments screamed at-least-this-won't-make-a-dent-in-the-mortgage. (Unfortunately, that also means your Jessica McClintock prom dress will likely not be a collectible, according to Karen E. Augusta of vintage fashion auction house Augusta Auctions. But, as she wrote in an email, "You never know!") Even more relieving for parents was the fact that McClintock's dresses flattered figures without showcasing too much of them. That made the designer an outlier in the increasingly provocative prom market, which now favors cut-outs over class. "Jessica, she had two points of view on prom: She had designs for good girls, and we had designs for sexy girls," Shklovsky says. "But even our sexy girls were still good girls."

Though McClintock will no longer be in the manufacturing business, the designer has still licensed her home collection and fragrance line — which is familiar to anyone hit with the scent upon entering one of Jessica McClintock's stores — among other apparel and accessory lines like intimate apparel and fashion jewelry, and has plans to license both prom and bridal categories in the future. Still, despite the fact that Jessica McClintock products will still exist, without her stores, it's an undeniable end of an era, particularly for women who recall their Jessica McClintock gowns as fondly as they do butterfly clips and Got Milk? ads. The hours spent trying on different cuts in the store, the hours spent perfecting an updo that best flatters your dress' neckline, and the hours spent twirling in your gown after realizing that that's more fun than slow-dancing with the guy that asked you to the dance — so many memories were made with Jessica McClintock, it's no wonder scores of young women loved her more than their prom dates.

Ed. Note: A previous version of this story stated that Jessica McClintock had shut down her business, but did not clarify that she had only shut down her manufacturing business. Jessica McClintock is currently working to license her prom and bridal product categories. Said McClintock in a statement, “My passion has been and will continue to be to provide my devoted customers with well-designed and value driven products reflecting my love of a romantic lifestyle. Make no mistake about it – that is our mission statement and will continue to be as we evolve our business model. We look forward to working with the retailing community on providing their customers with a viable fashion alternative.”