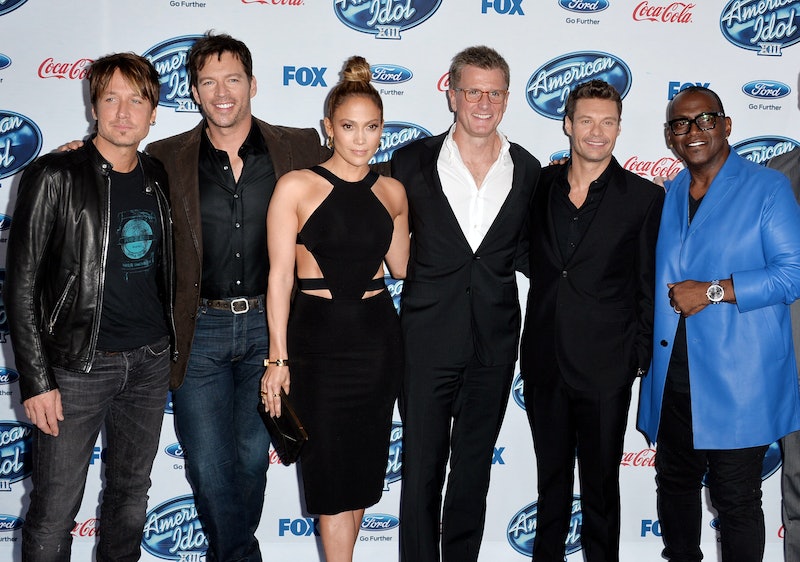 In a totally unprecedented move (kidding) FOX has renewed American Idol for yet another season. Despite the show's ratings being at an all time low, American Idol still maintains an average of 12.3 million viewers each week. You might wonder how viewers could have possibly maintained interest in the show following the first three seasons, let alone 14, but let's not forget that American Idol was a number-one television show for nine consecutive seasons and still remains a top five TV program. American Idol has become a cultural phenomenon, the gold standard in singing competition shows, and has popped out plenty of successful recording artists. Now, with plans to begin a 14th season, American Idol has become "The Little Engine That Could" of talent competition reality TV. Haters gonna hate, but it just keeps on chugging. American Idol judges Jennifer Lopez, Harry Connick, Jr., and Keith Urban are likely to return for the 14th season. Ageless vampire Ryan Seacrest is also said to be returning to Idol as the show's host.

There's nothing like knowing a TV show has been around for 14 years of your life to make you feel old, and after so many seasons, it's hard to imagine a guest judge or song that hasn't appeared on Idol . There's no telling how much longer the show could possibly go on, and just in case the 14th season is Idol's last, I think it's time to go ham with some brand-new guest judges. Here are my recommendations.

Bring this woman on the show immediately! You'll thank me later, FOX.

This one might be a tough sell for Beyoncé, who probably has way more glamorous things to do than appear on a singing competition show. She may be too busy basking in the golden glow of her greatness (and she may be too expensive to book for an appearance), but I think she should drop by the show if only to appease us common people for one episode.

You know Miley would be down. She may be slightly intoxicated, but she would at least show up. Come on, FOX, do you want those ratings up or don't you??

Can we have Brian Dunkleman back just for like, a quick second? So we know he's still alive?

Kim, Khloe, Kylie, or whoever. If American Idol is going to continue to survive, they need to follow the golden rule: when in doubt, bring in a Kardashian. People know who they are and they'll never stop watching them. It's only a matter of time before one of them "drops a single" again ("Turn It Up", anyone?).