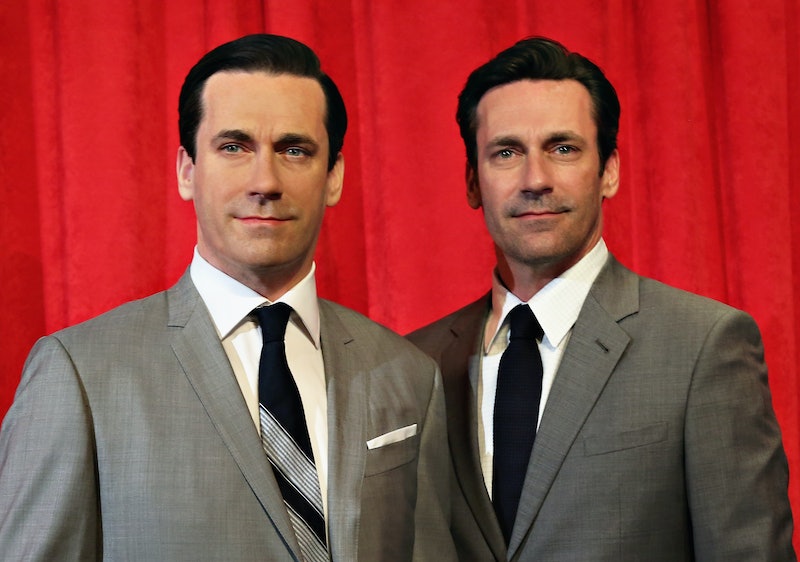 Screw Emmys, Jon Hamm just got the next best thing! Jon Hamm now has a wax figure at Madame Tussauds in New York City. It's obvious that the wax figure is more Don Draper than Jon Hamm: He's got the 60s-style pocket square, the perfectly coiffed hair (meaning that wax sculpture Draper successfully stuck with the no drinking thing), and a glass of whiskey in his hand. The two are dressed pretty similarly in grey suits which is something Hamm joked about at the unveiling on Friday. He told the Associated Press, "This is happenstance, but it is kind of crazy how kind of identical we decided to dress. I'm referring to him as a human being as if he dressed himself."

Hamm took several photos with the figure and it's clear that seeing the two of them together (I'm also referring to "him" as a human being) really demonstrates the differences between Hamm and Draper. The actor noticed this himself saying of the figure's cold stare, "A lot of people would say this kind of describes my acting. A lot of waxy stares, a lot of silent brooding."

Just check the two guys out together. They couldn't be more different.

Jon Gets The Ladies

(That's his long-time girlfriend Jennifer Westfeldt, by the way.)

Don Is Uninterested In New Technology

It's true! He really is.

Don Likes To End Them

I've gotta say, when pitted against each other, I'm firmly on Team Jon.