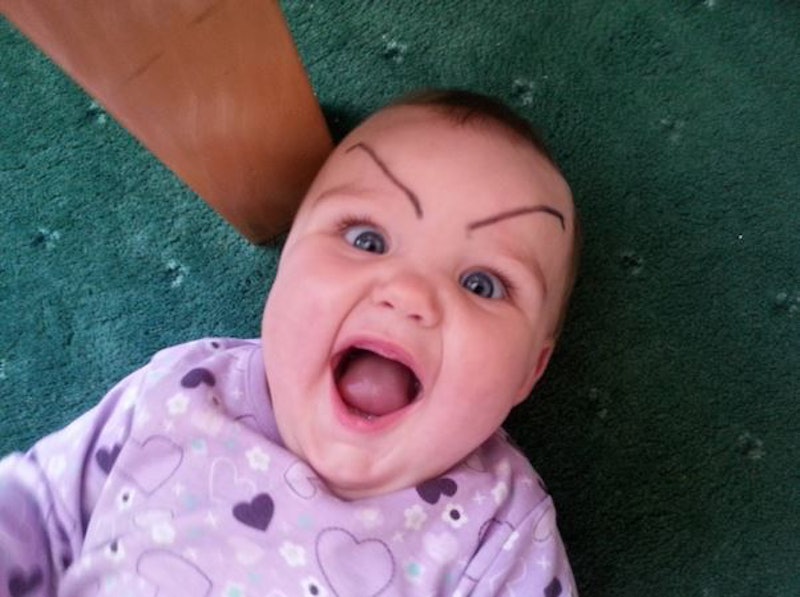 The world of Internet memes is a strange and sometimes baffling place. Paula Deen Riding Things? Sure! Strutting Leo? Why not! Drawing Eyebrows on Babies? Awesome!... Wait, hang on. What? We’re drawing eyebrows on babies now, just because we can? Well… OK then.

To be fair, we’ve done weirder things with eyebrows before, namely removing them from celebrities — but unlike that particular brand of Photoshop magic, from what I can tell, the babies featured in the brand spankin’ new Drawing Eyebrows on Babies meme have all had eyebrows actually drawn on them. Presumably their bored and cranky parents took some spare eyeliner (or in some cases, false eyelashes) and went to town on their offspring in an attempt to bring some levity to the horrors of being a new parent.

This particular meme seems to be so new that Know Your Meme doesn’t even have an entry on it yet. Will it take off and become a global phenomenon? Or is the post that began on College Humor and has since been reposted over and over again a one-time deal, never to be seen again once it rides in to the great Internet sunset? Only time will tell.

In the meantime, go ahead and laugh your head off at some poor child’s expense. These kids are either going to embrace their Internet infamy at an early age, or need lots and lots of therapy later on. It’s anyone’s guess which.