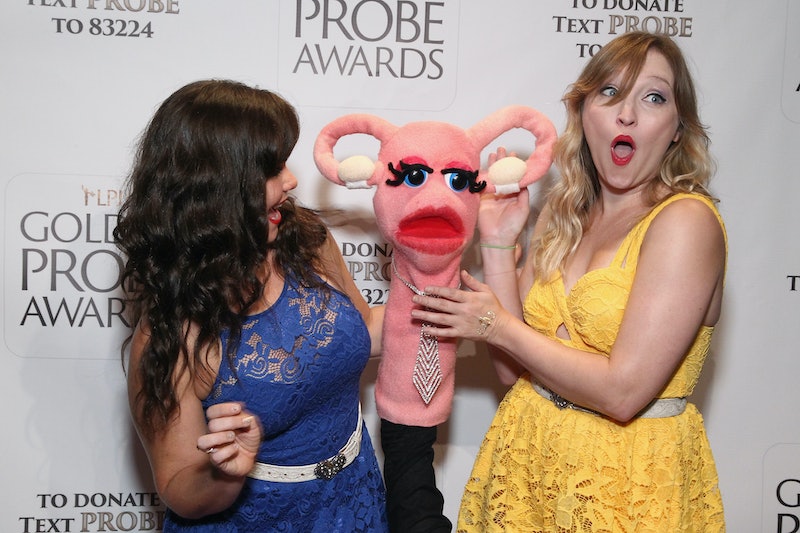 A new study has revealed a worrying problem: female genitalia in all species are understudied. Hugely. And the reason why might surprise you.

The study, conducted by scientists at the University of Macquarie in Australia, revealed that research is (surprise-surprise) hugely biased towards males. Over 80 percent of all published studies are either only about male sex organs, or a combination of male and female. Purely female-focused studies? They get 20 percent of the attention on a good month — but most of the time, it's more like 10 percent.

And it's a trend that appears to be getting worse: A similar study in 2004 criticized the bias against studying females, but since then, the trend toward studying males has actually increased. Whether they're examining ducks or dragonflies, researchers appear to be preoccupied with the penis (or variations thereof).

Getting female genitalia more attention in science is sure to prove a tricky problem to solve. A vagina publicity drive? Convincing the European Research Council and other bodies to encourage vagina-centric studies with more funding? Oprah?

So what's so important about studying female cells and sex organs in biology? Well, when it comes to vaginas specifically, it means a fuller understanding of female sexual selection and evolution. For biology in general, it influences issues as diverse as studying women's reactions to diseases and how our brains work. Oh, and did we mention we're half of the animal kingdom?

The lack of scientific focus on female sex organs isn't a new problem. Before he started identifying Oedipal complexes, Sigmund Freud spent an entire summer dissecting immature eels, searching for the male sex organs. (He dissected 400 and didn't find any.)

But neglecting the "gentler sex," (as Freud called his eels in a letter in that fruitless, penis-less summer) isn't just a side issue for biologists. It's reflective of a huge difficulty in current science: Female bodies are getting badly biologically-sidelined.

How could it be that vaginas are still off the research table? It seems that one reason, according to the Macquarie researchers, might be some outdated, sexist science. Scientists may be neglecting vaginas because they think females are "passive" when it comes to reproduction. Yes, really.

"We found that the most plausible explanation for the bias is the enduring assumptions about the dominant role of males, and unimportance of variation in female genitalia," Malin Ah-King, one of the researchers, said in a press release.

Males, in other words, are supposed to do all the "work" of sexual competition, while females just lie back and think of England.

Where did these daft assumptions come from? Well, er, possibly Charles Darwin.

In 1871's The Descent Of Man, he described females of all species as "coy" and "comparatively passive." The burden of sexual competition, for Darwin, was largely about males brawling: Even though ladies did eventually choose a mate, most of the business of actual sexual selection was decided by dudes.

As Griet Vandermasse explains in her 2005 book, Who's Afraid Of Charles Darwin?: Debating Feminism And Evolutionary Theory, this idea owes much more to Darwin's Victorian perspective than to actual science. Darwin did insist that females had a definite role in sexual selection (though people are still arguing about what he meant), but even that was so revolutionary for his age that it was promptly ignored. The Macquarie researchers believe this thinking is still an undercurrent in biology, making vaginas seem somehow secondary.

But Professor Göran Arnqvist, head of the Evolutionary Biology Centre in Sweden, disagrees. He tells Bustle that there are very good practical reasons for female genitalia not being studied as much; many vaginas involve soft tissue, which is notoriously tough to dissect, and the bits that require close examination are often tiny and intensely complex.

The other problem? To understand a female's sexual choices, you often have to look at how they act in the wild — and that's tricky. "We are often dealing with female behavior or perception," says Professor Arnqvist, "which is more difficult to study and measure." Well, you don't say.

Lessening the role that sexism plays in biology may be difficult, because many scientists, including Professor Arnqvist, aren't convinced it is influencing research.

"Within this field of evolutionary biology, I simply see no view [of females being inferior]," Arnqvist says. "On the contrary, anyone who knows the theory in this field shares the view that, if anything, females have a dominant role."

Getting female genitalia more attention in science is sure to prove a tricky problem to solve. A vagina publicity drive? Convincing the European Research Council and other bodies to encourage vagina-centric studies with more funding? Oprah?

An article in Nature last month by the National Institute of Health (NIH) proposes a solution. In the report, the NIH blasts medical researchers who choose to use male mice over females in experiments because of "convention" and the idea that female mice's menstrual cycles would distort the data. (Spoiler: they don't seem to.) The NIH alleges that this is just one example of how science's current culture still relies on male organs and cells as more "reliable," while female ones are left by the wayside.

Luckily, the NIH is deciding to do something about it. Beginning in October, a new policy called Filling The Gap will make it compulsory for scientists' study applications to explain what gender cells or organs they're using and why.

"We expect that such a mechanism will no longer be needed once policies on sex influences are implemented," the NIH says.

Meanwhile, the gender imbalance in research could be disrupting everything from vaccine research to ecological preservation. In fact, it's skewing results so much that the University of Wisconsin has just created the world's first postdoctorate position in "feminist biology," designed to "uncover and reverse gender bias in biology."

Because, apparently, that still needs to exist.

More like this
Romance Authors Are Mobilizing For Reproductive Rights
By Natalia Perez-Gonzalez
Breeding Kinks Have Been On The Rise Since Roe V. Wade Got Overturned
By Lexi Inks
Are Quality Time & Gift-Receiving Love Languages Compatible?
By Lexi Inks
The Differences Between Polyamory & Open Relationships
By Lexi Inks
Get Even More From Bustle — Sign Up For The Newsletter