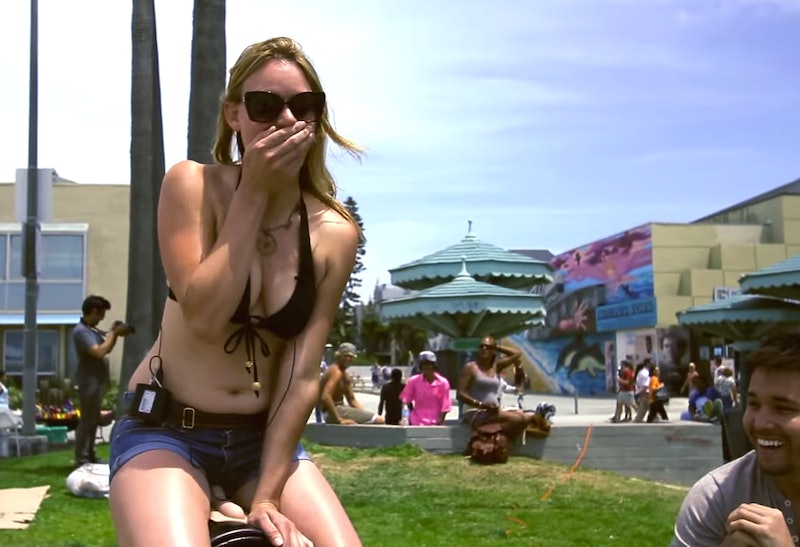 What's the best way to raise money for charities that benefit women? Well, for the guys over at Simple Pickup, a pickup artist YouTube channel, the answer seems to be exploiting female bodies. So that's just delightful. The trio are now raising money to fight female genital mutilation, a serious problem in various parts of the world that they're combatting with...sex toys.

Their fundraiser goes something like this: First, approach random women on the street and ask them if they like their clitoris. Next, explain that you will donate five dollars to a female genital mutilation charity for every second that the woman stays on a vibrating sex toy saddle. And finally, let random passers by watch and take pictures of the women since this whole thing takes place right out in public. Gag.

This isn't the first time that the men at Simple Pickup have pulled a stunt like this. Last year, they were donating to breast cancer for every woman that let them motorboat them in public. I personally can't decide if this new fundraiser is better or worse. On the one hand, the men in question aren't touching anybody in the new video, but on the other hand, this version is more overtly sexual and makes the women into a display for people to ogle.

In both cases, though, it's pretty despicable to make your support of a women's charity–or any charitable cause–dependent on women participating in some sort of sexualized performance. There are loads of ways to raise money for charity that don't involve objectifying female bodies, not to mention the fact that making cause like breast cancer or female genital mutilation about sex denies the fact that both of those issues cost women their lives. Not their sex lives, but their actual lives. Sexualizing that implies that the sexual aspect is the most important, which is just awful.

The pickup artists managed to raise $1,335 dollars for the Orchid Project and have already donated the money (helpfully providing video proof). However, with their breast cancer fundraiser, the organization ultimately rejected their donation after becoming aware of their fundraising methods. The boys blamed feminists for costing breast cancer research all the money, like feminists made them go out and disrespect women so much that charities didn't want to be associated with them.

If Orchid Project decides to accept the donation anyway–or just doesn't hear about it–then at least the money will be going to a good cause, but let's not pretend these guys really care. After all, their video offers no information about female genital mutilation, and doesn't even provide a link to Orchid Project in the description of either their original video, or the video that shows their donation (you can have that link right here if you're interested).

And yeah, I understand that girls under the age of five having their clitorises cut off, which can result in infection and death, is not the most cheerful topic for a funny video. But then, it's not a cheerful topic, and exploiting female bodies shouldn't be funny. If the guys really cared, they'd be trying to raise awareness or encouraging their viewers to also donate, even if just in the description. But it's pretty clear that for them, this is mostly an excuse to see girls publicly ride a sex saddle. Hilarious.