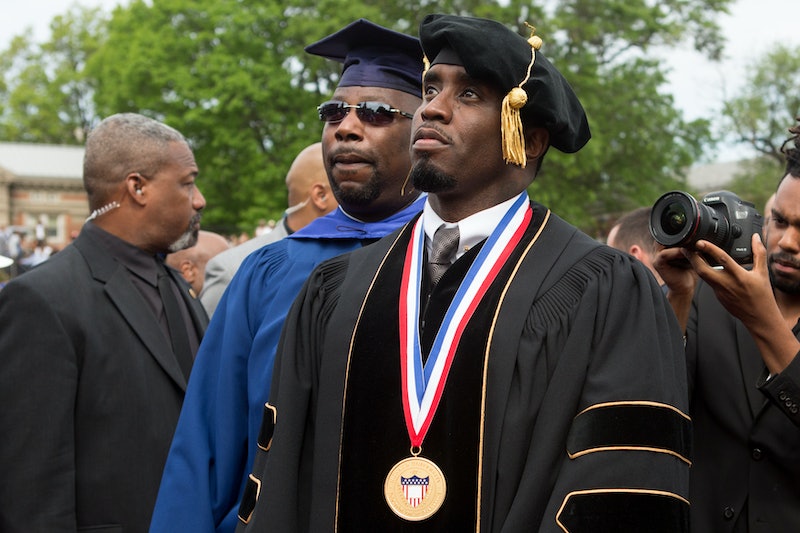 When I found out Virginia Gov. Terry McAuliffe was going to be my commencement speaker at Virginia Tech’s graduation this year, I — as well as many of my peers — let out a giant groan. I don’t have anything against the governor (though I can’t speak on behalf of some of my friends), but after four years of a college education, the last thing I wanted to hear was that my milestone speech was going to be delivered by a politician… unless it’s the FLOTUS, because that happened and it was awesome. So when I heard that Sean Combs delivered a speech and received an honorary doctorate at Howard University, his would-have-been alma mater, I couldn’t help but let out a sigh of jealousy.

There’s no doubt that many people want some sort of famous person to deliver their commencement speech because graduating college is a major milestone in a person’s life. After completing primary and secondary school, then making your way to a university where you spend the next four (or five) years taking finals, experiencing all nighters and finishing those senior projects, having a good speaker is a necessary component of the graduation package.

However, not every school is so lucky to have the likes of celebs like Puff Daddy grace their campus, and at the same time, there are even celeb speakers who just don’t cut it. So here are some of the best and worst celebrity commencement speakers, as well as those who have yet to give their speeches this year.

It only seems right to start off with our friend Puff Daddy considering he just gave his commencement speech. The rapper and music mogul delivered his speech in Washington, D.C., where he received a standing ovation (of course). “I can’t wait to live in the world that y’all are about to create,” he said. “I am a unicorn. You are a unicorn. We are unicorns.” Obviously Combs wins life because anything involving unicorns is the best.

On May 17, Manning will be delivering the Valedictory address for the University of Virginia’s Finals Weekend, meaning he will be concluding with ceremony with a farewell statement and last remarks. So basically anything he says at the end of his speech will be the last words that stick with this 2014 graduating class of Wahoos. We already know that Manning has a world of accomplishment under his belt, but the idea of a football player delivering a speech at graduation makes me skeptical. Just like a politician who will likely manage to sneak in something about their party’s goals, I can only imagine Manning’s speech will be riddled with athletic metaphors. Meh.

University of Pennsylvania alum and the heartthrob of a singer, John Legend, will be delivering the school’s address on Monday, May 19. Is Legend even good at delivering speeches? I mean he sings, but that’s a different kind of performance. Will he end up busting out into song, singing All of Me? Who knows. But it’s a safe bet that whether his speech is meaningful or not doesn’t really matter because it’s John freakin’ Legend.

It’s no surprise really that talk show host and actress Winfrey has made her way around the nation with her commencement addresses at Howard University, Duke University, Harvard University, Stanford University and Spelman College among others. Yes, there were others. Likewise, it’s no shocker that she offered some amazing advice. “It doesn’t matter how far you might rise,” she told the students of Harvard. “At some point, you are bound to stumble. If you’re constantly pushing yourself higher and higher, the law of averages predicts that you will at some point fall. And when you do, I want you to remember this: There is no such thing as failure. Failure is just life trying to move us in another direction.”

Though DeGeneres never actually graduated college, the comedian and actress gave one hell of a speech when she was the speaker for Tulane University. So. Jealous. Always humorous but also incredibly intelligent, DeGeneres gave the 2009 graduating class these words of wisdom: “As you grow, you’ll realize the definition of success changes. For many of you, today, success is being able to hold down 20 shots of tequila. For me, the most important thing in your life is to live your life with integrity, and not to give into peer pressure.”

Then there was that time that actress Foster delivered a commencement address for University of Pennsylvania, ending it with a beautiful quote from Eminem: “You better lose yourself in the music, the moment, you own it. You better never let it go. One shot! Do not miss your chance to blow. This opportunity comes once in a lifetime.” What a boss.

Unfortunately, not everyone can be so fortunate as to have a celebrity speaker to provide valuable insight into their lives post-graduation. “Now I usually try not to give advice. Information, yes, advice, no,” she said. “But, what has worked for me may not work for you. Well, take for instance what has worked for me. Wigs. Tight clothes. Push up bras. High heel shoes, five inch high heel shoes. All I gotta say, take my advice some of you boys out there may find yourself on a little different career path than you might have planned. And you girls better be careful, too, seriously.” Mind you, Parton’s speech wasn’t all that bad, but it definitely wasn’t as inspirational as some of her competitors’ speeches.

Remember that time when people said it was a good idea to improvise your speech? Just kidding. No one in the history of graduation speeches has ever said that. Yet the actor, who has quite the resume having starred in films like Super 8 and Vantage Point (soon to star in Godzilla as well), improvised his speech at the University of Maryland’s 2011 graduation. “I had this great speech ready for you guys, then they put me behind a bunch of doctors… An actor behind a bunch of doctors,” he said. “They said everything I was going to say. So I figure I’ll just keep talking until I say something.” Yes, that’s what every graduating class wants to hear.

More like this
Stormzy Had The Sweetest Reaction To His New Honorary Degree
By Sam Ramsden
At 14, Bryce Dallas Howard Was Being Grounded From Set
By Olivia-Anne Cleary
Here’s How Lizzo Is Supporting Abortion Rights After The Roe v. Wade Reversal
By Brad Witter
Michelle Obama & Taylor Swift React To The Supreme Court Overturning Roe v. Wade
By K.W. Colyard
Get Even More From Bustle — Sign Up For The Newsletter