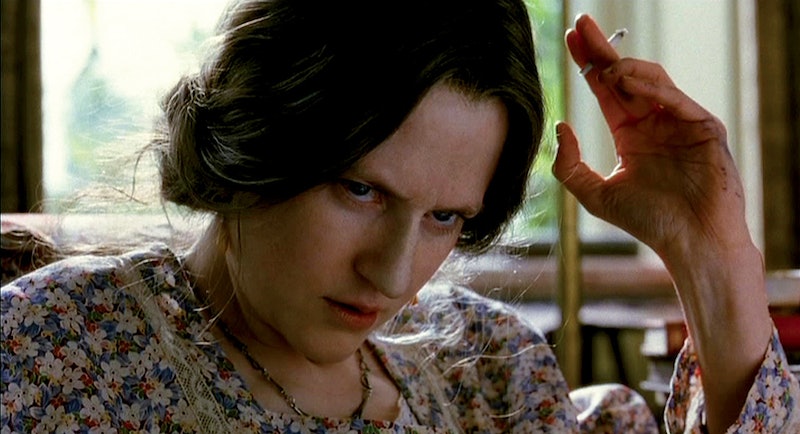 It's been a whopping 89 years since the publication of Virginia Woolf's Mrs. Dalloway, and, true to form, it has aged so elegantly. Clarissa, you're on our minds when we throw parties, run into ladies we have kissed, and get the flowers ourselves. In the novel (her fourth), Woolf takes readers through a day in the life of the 52-year-old British woman and delineates her thoughts, memories, and chores in preparation for a "party tonight!" Parallel to Clarissa's story is that of Septimus Smith, a veteran who's returned from war and is mentally unwell. As the two meander separately in London, just after the end of World War I, they reflect each other's experiences, fears, needs.

We don't play favorites with Woolf novels (they're like children, or pies), but we do have a special regard for Dalloway. Clarissa has taught us bouquet-fuls about friendship, the upper-class, being a partner, having a consciousness, and what it means to be alive in the same city as so many strangers.

Since we're feeling so Woolfish, why not revisit her best short stuff? Here's a list of six essential Woolf pieces — in addition to Dalloway — for any modern lady, and a preview of what makes them so significant.

Oh man. Just 20 pages, this second part of To the Lighthouse encompasses 10 freakin' years of life. Here's a little taste of what happens to the Ramsay family et al:

And now in the heat of summer the wind sent its spies about the house again. Flies wove a web in the sunny rooms; weeds that had grown close to the glass in the night tapped methodically at the window-pane. When darkness fell, the stroke of the Lighthouse, which had laid itself with such authority upon the carpet in the darkness, tracing its pattern, came now in the softer light of spring mixed with moonlight gliding gently as if it laid its caress and lingered stealthily and looked and came lovingly again ... [A shell exploded. Twenty or thirty young men were blown up in France, among them Andrew Ramsay, whose death, mercifully, was instantaneous.]

"The Mark on the Wall"

It's easy to imagine the inspiration for this story, but its trajectory is not in the slightest predictable. Woolf takes us down some pretty trippy paths.

But as for that mark, I’m not sure about it; I don’t believe it was made by a nail after all; it’s too big, too round, for that. I might get up, but if I got up and looked at it, ten to one I shouldn’t be able to say for certain; because once a thing’s done, no one ever knows how it happened. Oh! dear me, the mystery of life; The inaccuracy of thought! The ignorance of humanity! To show how very little control of our possessions we have—what an accidental affair this living is after all our civilization—let me just count over a few of the things lost in one lifetime, beginning, for that seems always the most mysterious of losses—what cat would gnaw, what rat would nibble—three pale blue canisters of book-binding tools? Then there were the bird cages, the iron hoops, the steel skates, the Queen Anne coal-scuttle, the bagatelle board, the hand organ—all gone, and jewels, too. Opals and emeralds, they lie about the roots of turnips.

"Plot and rules of narrative structure, be damned!" Woolf said before writing these six paragraphs, raising a fist to the heavens. Probably.

Radiating to a point men’s feet and women’s feet, black or gold-encrusted—(This foggy weather—Sugar? No, thank you—The commonwealth of the future)—the firelight darting and making the room red, save for the black figures and their bright eyes, while outside a van discharges, Miss Thingummy drinks tea at her desk, and plate-glass preserves fur coats—

This story, written while Woolf was working on Mrs. Dalloway (possibly an excluded chapter, or else a story on its own), is pretty apt for anyone who shows up anywhere with (spoiler alert) outfit regret.What she had thought that evening when, sitting over the teacups, Mrs. Dalloway’s invitation came, was that, of course, she could not be fashionable. It was absurd to pretend it even — fashion meant cut, meant style, meant thirty guineas at least — but why not be original? Why not be herself, anyhow? And, getting up, she had taken that old fashion book of her mother’s, a Paris fashion book of the time of the Empire, and had thought how much prettier, more dignified, and more womanly they were then, and so set herself — oh, it was foolish — trying to be like them, pluming herself in fact, upon being modest and old-fashioned, and very charming, giving herself up, no doubt about it, to an orgy of self-love, which deserved to be chastised, and so rigged herself out like this.

"A Sketch of the Past"

(this one's not online, but you should check out the book it's in)

Woolf reflects on reality and time and her mom. This is the essay (published from her unfinished memoir) from which her amazing description of "moments of being" is often quoted. It was published posthumously by good old Leonard Woolf in 1972.

Behind the cotton wool is hidden a pattern; that we—I mean all human beings—are connected with this; that the whole world is a work of art; that we are parts of the work of art. Hamlet or a Beethoven quartet is the truth about this vast mass that we call the world. But there is no Shakespeare, there is no Beethoven; certainly and emphatically there is no God; we are the words; we are the music; we are the thing itself.

"Thoughts on Peace in an Air Raid"

V wrote this in 1940 for a speech at a women's college, and it is incredibly sobering stuff.

But to make ideas effective, we must be able to fire them off. We must put them into action. And the hornet in the sky rouses another hornet in the mind. There was one zooming in The Times this moming — a woman’s voice saying, “Women have not a word to say in politics.” There is no woman in the Cabinet; nor in any responsible post. All the idea makers who are in a position to make ideas effective are men. That is a thought that damps thinking, and encourages irresponsibility. Why not bury the head in the pillow, plug the ears, and cease this futile activity of idea-making?