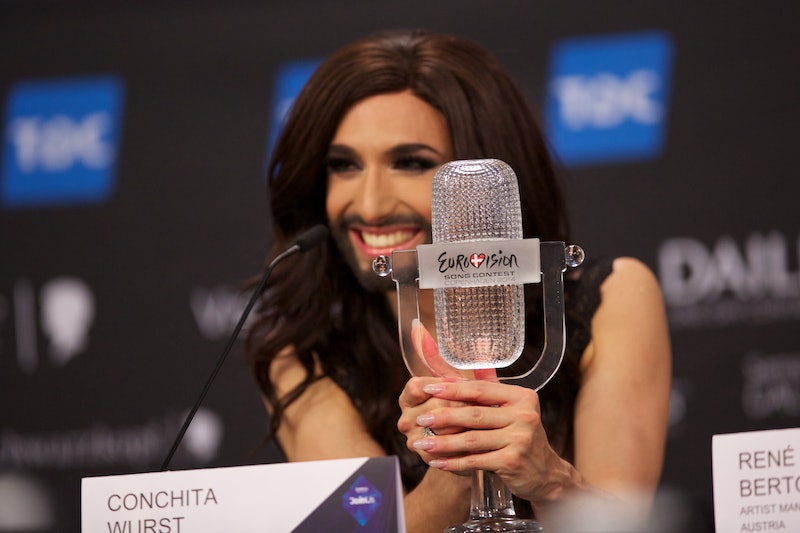 When popular Austrian drag queen Conchita Wurst was added to the 2014 Eurovision song contest lineup, petitioners in Russia tried to get her kicked off the program. One petition referred to the event as “a hotbed of sodomy” for including Wurst, while a Russian lawmaker tried to get his country to boycott the “Eurovision sodom show” altogether. But those petitions failed, and on Sunday, Wurst won the top prize at the Eurovision song contest. Meanwhile, Russia’s entrants were booed by the crowd in Copenhagen.

"I felt like tonight, Europe showed that we are a community of respect and tolerance," Wurst said at a press conference after her win. “Not just for me, but for all out there who believe in a future with peace and love and tolerance and acceptance...I know there is a different world besides Eurovision song contest, but I believe that also the people outside of Eurovision think in the way I do.”

The inclusion of Wurst in the contest elicited a flood of transphobia and homophobia from Eastern Europe: In addition to Russia, protesters in Belarus and Ukraine also objected to her presence in the competition, and prominent Russian politicians denounced her and her lifestyle. In all three countries, petitioners tried unsuccessfully to convince state media not to air her performance, with more than 15,000 people signing the Russian petition.

“Russia is one of the only European countries that has managed to maintain normal and healthy family values based on love and mutual support between men and women,” the Russian petition said, with the authors apparently confusing cross-dressing with same sex marriage.

But it was all for naught. Wurst’s performance of “Rise Like A Phoenix” got her first place even before all of the ballots were counted, while Russia’s representatives — the 17-year-old identical Tolmachevy sisters — came in seventh. They were reportedly booed numerous times, ostensibly in objection both to Russia’s state-sponsored homophobia and its recent annexation of Crimea.

After the results were announced, Russian politician Vladimir Zhirinovsky hyperbolically referred to Wurst’s victory as “the end of Europe.” Wurst, though,has taken the criticism in stride, insisting that she has “very thick skin.”

“If this is only about me and my person, I can live with it,” she said. “I’m just a singer in a fabulous dress, with great hair and a beard.”

More like this
Eurovision 2023 *Might* Be Held In The UK
By Sam Ramsden and Rachel Mantock
How To Fight For Reproductive Rights, Based On How Much Time You Have
By Courtney Young
Boris Johnson’s Leadership Is In Question – Again
By Bustle UK
The Families Of Grenfell Tower Are Still Waiting For Justice, Five Years On
By Bustle UK
Get Even More From Bustle — Sign Up For The Newsletter