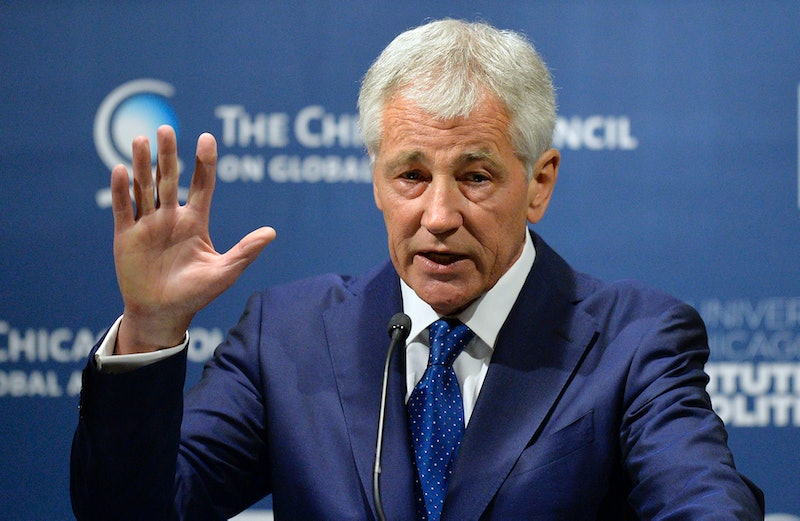 In an interview Sunday, Secretary of Defense Chuck Hagel said the military’s ban on transgender people should “continually be reviewed,” and that he’s open to overturning it. While he didn’t actively endorse a change in policy, he did say that “every qualified American who wants to serve our country should have an opportunity.” That’s a big step for a politician who once supported the Defense of Marriage Act.

“I do think it continually should be reviewed,” Hagel said. “I’m open to that, by the way. I’m open to those assessments. Again, I go back to the bottom line: Every qualified American who wants to serve our country should have an opportunity if they fit the qualifications and can do it. This is an area where we’ve not defined enough.”

However, Hagel also claimed that the “issue of transgender,” as he clumsily put it, is complicated by medical concerns.

“These issues require medical attention,” Hagel said. “Austere locations where we put our men and women, in many cases, don’t always provide that kind of opportunity.”

That’s far from the consensus view. In March, a commission investigating the merits of the policy concluded that there’s “no compelling medical reason for the ban.”

“The ban itself is an expensive, damaging and unfair barrier to health care access for the approximately 15,450 transgender personnel who serve in teh active, Guard and reserve components,” said the commission, which was chaired by former Surgeon General Joycelyn Elders.

Nevertheless, this is encouraging news. Hagel, a former Republican Senator, was once a staunch opponent of LGBT rights, but has “evolved” substantially since being appointed Defense Secretary. Most recently, he pushed aggressively and successfully to provide benefits to same-sex military spouses in face of strong Republican opposition in Texas.