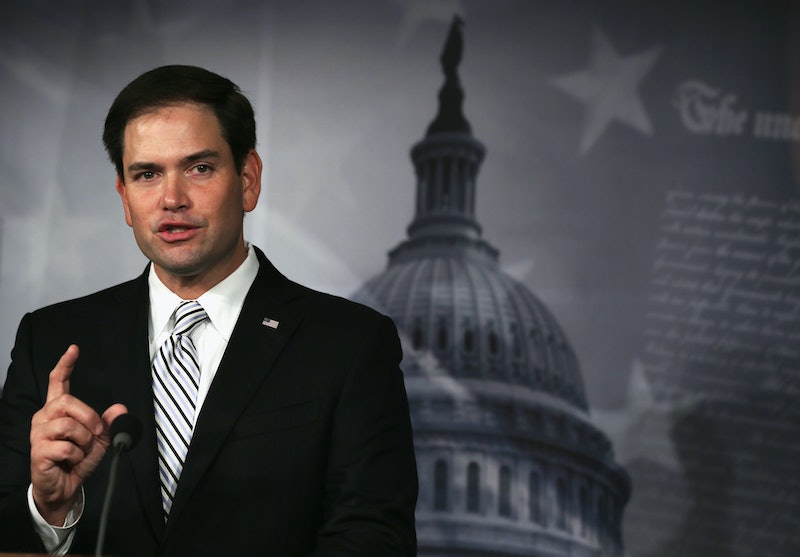 The latest politician to announce he's ready to be president is Sen. Marco Rubio (R-Fla.), the freshman senator known for his impressive water-sipping skills. Unlike his Republican colleague Sen. Rand Paul, Rubio didn't reveal his intention for the presidency by trying to pass a law saying he can run for both president and senator — nope, Rubio just sat down with ABC's John Karl on The Week, which aired Sunday night.

During the interview, Rubio discussed Hillary Clinton and conspiracy theories, made some Rand Paul disses, and claimed he's definitely qualified to be the leader of the free world. Some of the dumbest quotes from Rubio's interview...

1. Immigration Is Not That Important

One of Rubio's biggest appeals to moderate voters has always been his dedication to immigration reform. However, it seems that the senator is backpedaling on his immigration platform to please his fellow Republicans:

There's a lot of issues going on in the country, and immigration right now is not at the forefront.

But he hasn't totally given up!

If Hillary Clinton does run in 2016, you can expect a lot of the B-word — Benghazi, that is.

I’m sure she’s going to go out bragging about her time in the State Department. She’s also going to have to be held accountable for its failures, whether it’s the failed reset with Russia or the failure in Benghazi that actually cost lives.

So what grade does Clinton get in Rubio's foreign policy class?

I don't think she has a passing grade [as Secretary of State].

3. But Don't Ask Him About Fundraising

When pressed about the amount of money the Republican Party is spending on the number of Benghazi hearings, Rubio got pretty testy:

I would prefer we focus not on the fundraising elements or the political elements of it.

4. He Does Believe In Climate

Well, kind of. Rubio talked in circles about the impact of climate change, saying that he believes in weather:

Our climate is always changing.

And acknowledges that it often rains very hard in Florida:

We’ve had hurricanes in Florida forever.

5. But He Doesn't Believe In Climate Change

Rubio, however, disagrees with scientists who say humans are contributing to climate change, and policies that would help curb the destruction of the environment:

I do not believe that human activity is causing these dramatic changes to our climate the way these scientists are portraying it. That’s what I do not believe.

Unfortunately, Rubio's misinformed views on science, foreign policy and other political talking points aren't limited to this interview. Here are some of the strangest things Rubio has said over the years:

But Rubio also has some bright spots. He once quoted "modern-day poets" Jay-Z and Wiz Khalifa during a filibuster, which is perhaps one of his best speeches. Ever.