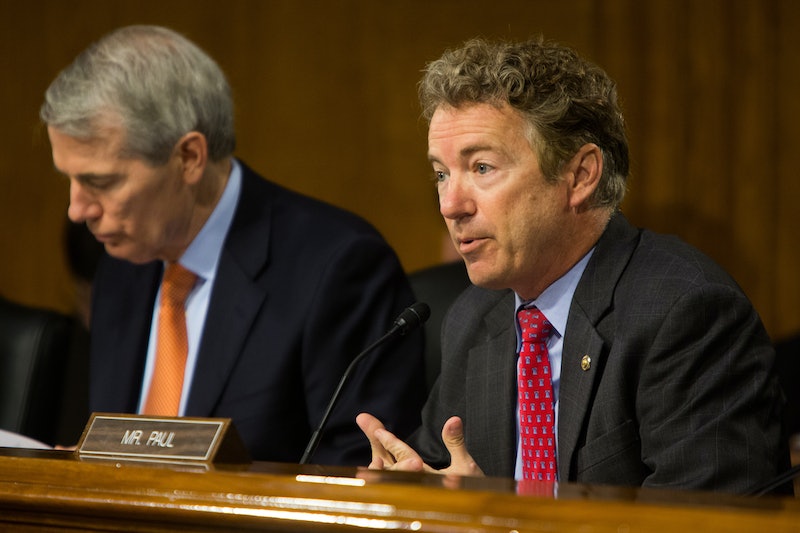 On Sunday, Kentucky Sen. Rand Paul published a New York Times op-ed Sunday calling for the release of controversial memos on drone strikes, which are authored by former Assistant Attorney General at the Office of Legal Counsel (OLC) David Barron. For once, Rand has bipartisan support on this one, including — surprise! — from the ACLU. As the Senate prepares to vote on whether or not to approve Barron, controversy has erupted over Barron's role in crafting the legal framework which enabled the drone strike, without trial, of alleged radical imam and al-Qaeda supporter Anwar al-Awlaki.

Basically, Barron helped craft the legal arguments to kill an American without due process — al-Awlaki was a citizen by birth, born in New Mexico.

It wasn't just the elder al-Awlaki who paid the price for his own alleged crimes — his son, 16-year-old Abdulrahman, was also killed in Yemen just weeks after his father. Abdulrahman was also an American citizen, and died in a drone attack on a cafe while we was reportedly searching for his father. This one American officials say was an accident, and that the teen was in the company of suspected al-Qaeda members — but was, nonetheless, not the intended target of the attack. Abdulrahman had no known connection to terrorism, beyond the charges leveled at his father.

When pressed on the rationale for, or consequences of the killing in 2012, former White House Press Secretary Robert Gibbs' attempt to defend the policy, and the death of the younger al-Awlaki, took a decidedly unsettling tone.

I would suggest that you should have a far more responsible father if they are truly concerned about the well being of their children. I don't think becoming an al Qaeda jihadist terrorist is the best way to go about doing your business.

All this serves as the highly-controversial backdrop to the Barron nomination, which was announced in September 2013 and now awaits Senate confirmation. And Sen. Paul, supported by an uncommonly varied ideological coalition — from his own brand of government-wary conservatism, to the ACLU, to the far-left anti-war activists of Code Pink — now seems to be the main guy pressing the charge.

As Paul wrote in his New York Times op-ed:

In battle, combatants engaged in war against America get no due process and may lawfully be killed. But citizens not in a battlefield, however despicable, are guaranteed a trial by our Constitution. No one argues that Americans who commit treason shouldn’t be punished. The maximum penalty for treason is death. But the Constitution specifies the process necessary to convict.

It's not difficult to see why so many people would like a peek at the administration's legal rationale. After all, back in 2009, President Obama released Bush-era memos approving torture of alleged terrorist detainees to the public — a rather more transparent and open view than he's employed on his own administration's legal wrangling.

As Conor Friedersdorf argues in The Atlantic , while the precise contents of Barron's arguments are yet unknown, the relevant passages of the Constitution are pretty clear. The Fifth Amendment reads as follows:

No person shall be held to answer for a capital, or otherwise infamous crime, unless on a presentment or indictment of a Grand Jury, except in cases arising in the land or naval forces, or in the Militia, when in actual service in time of War or public danger; nor shall any person be subject for the same offense to be twice put in jeopardy of life or limb; nor shall be compelled in any criminal case to be a witness against himself, nor be deprived of life, liberty, or property, without due process of law; nor shall private property be taken for public use, without just compensation.

As for Barron's nomination, it's really a question of what rationale he employed to get from point A to point B. The crux of the argument from administration officials in the past, and reports of OLC memos, has been that al-Awlaki should have been considered an enemy combatant, actively engaged against the U.S. in wartime, and as such is not entitled to such protections.

It is worth noting that, in all this, Paul's comments have very little to say about the innocent non-Americans killed by drone strikes, which accounts for the vast majority of blood shed and lives lost.

On constitutional grounds, the same arguments can't be applied there, but it's important to keep a perspective on all this — Attorney General Eric Holder has admitted to four Americans being killed in such strikes. And since Obama's ascension to the White House in 2008, roughly 2,400 people have been slain by drones.